Antichrist - Written and directed by Lars von Trier, starring Willem Dafoe and Charlotte Gainsbourg - Not Rated (if it was, though, it would at least get an NC-17) 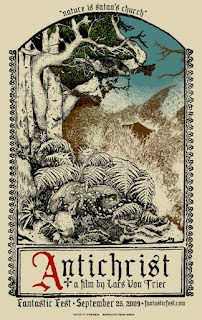 I broke a rule for this review. I usually never read reviews of movies I plan on reviewing until I've written my own. But I had to read some responses to this film first. I mention this because I'm going to repeat what a few of them say: I (dare I say it) liked Antichrist, but I wouldn't recommend it to anyone...ever. I don't want to be held responsible for putting you through the film. I'm not saying it will scar you emotionally or anything (it made me cringe, but I'll survive), but at the very least you might feel angry for having watched such a movie and then your opinion of me might never recover. Oh, and you might think I'm a sick human being for claiming to "like" the film. So don't watch this movie. But if being told not to watch something intrigues you, then read on.

I'll get into some of the reasons why I wouldn't recommend the film later. For now, let me summarize the relatively basic premise. The film opens in black and white, extreme slow motion as He (Dafoe) and She (Gainsbourg) have sex while their toddler climbs out of his crib and falls out of a window to his death. The scene plays out like a graphic opera and I thought it looked amazing. (Note: "He" and "She" are not the characters' names, it is how they are credited since they never call each other by name.) She is obviously quite depressed after the incident and her therapist husband takes it upon himself to cure her. He thinks the best way for her to deal with her grief, pain, and despair (three prevalent issues in the film) is to face what she fears the most: the woods surrounding their cabin (Eden). Then stuff gets crazy, to put it lightly.

That may not sound like the most messed up plot in the world, but you can tell that this movie isn't a feel good film. Dark, evil things happen in this movie. When that's the case you usually need a clear-cut hero to side with. Antichrist doesn't necessarily have that, but it didn't bother me. For me, the acting was good enough that I didn't care whether or not I liked the characters. I liked the performances. Gainsbourg gives a painfully impressive performance; she is thoroughly convincing as a depressed and troubled woman. Dafoe is perfect in this film, down to his appearance. I can't imagine anyone else attempting the role. His weathered face speaks volumes during the slow motion scenes.

Speaking of slow motion, this film has a great style. Lars von Trier might be full of himself (he claimed he was the best director in the world at 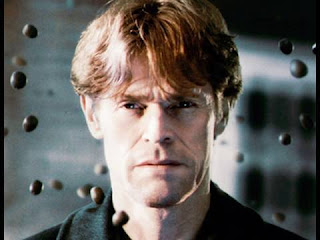 Cannes), but he has made a beautiful film. The images, of nature or of grotesqueness or of dreamlike quality, all look great. His camerawork is interesting as well. The slow zooms were a touch I enjoyed in the film. And even the simple framing of a conversation could lead to a discussion. Well, a discussion with me, anyway. The standout images all involve the cabin, Eden, and its wooded surroundings, though. The cabin is reminiscent of the cabin from Evil Dead and that's fitting, because some creepy things happen there.

Creepy is one word, but sick might be used as well. One review referred to this as an "art house" horror film. I suppose that's fitting, but it still retains a few images that are more gruesome than any regular horror film I've seen lately. It's psychological, but it's also shocking. I'm not going to spoil any part of the film in this review, so let me put it this way: the theatre I watched this in offered squeamish guides. The guide let you know when to look away. The theatre also usually serves alcohol (it's an independent theatre, which is why Antichrist was playing there to begin with), but they would not serve any to anyone watching Antichrist due to the graphic nature of the film. While I think that may be going overboard a bit, I must say that a few moments of Antichrist stick with you. (If you just have to know what happens in the movie, go to the message boards on IMDb or check out the Wikipedia page for the film.)

Whenever a film presents such graphic and possibly sickening images, I have to ask, is there a point? I say there is. The themes of the film (there are many, but I'll just focus on a few) require some of the brutality. The film probably would've gotten its point across by just implying some of these things, but it's stronger and more disturbing by showing them. In other words, I'll remember this film for a long time, whether I want to or not.

I don't want to dwell on what this film means (especially since it's open to interpretation), but I will say that there is a point to it, and a compelling one at that. Okay, maybe I will dwell on what I think the point is for a moment. The film has been called misogynistic (it even won an anti-award for it) and I can see how people could come to that conclusion, but I would disagree with it. Sure, there are moments that might make it seem that von Trier is calling every woman inherently evil, but it could also be a statement on how some individuals succumb to stereotypes

about themselves. Plus, it's not all about women and whether they are evil. The film is called Antichrist and their cabin is called Eden, so biblical issues are abound. I think it's quite easy to apply the story of creation and knowledge of evil to this film. Just watch how von Trier distorts the images of the outside world or how he shows you nature in its violent simplicity while the cabin seems to be a safe haven...from nature, anyway. There are multiple possibilities out there(one of the best involves the idea of Munchausen syndrome by proxy), but I think applying gender issues, good and evil, and nature is a safe bet.

No matter what your interpretation might be, this film will definitely lead to discussion and I find it hard to say a movie like this is good or bad (hence the absence of a "villain rating" this week). I said I liked this movie at the beginning, but I'm not sure if that's right. I did find this movie extremely interesting and I think that means something. Antichrist isn't a movie you like, it isn't a movie you recommend, it is a movie that makes you think, though, and while I may enjoy the mindless, fun movies more often than not, I still thoroughly enjoy a disturbing, beautiful, and, most importantly, thought-provoking film like Antichrist.
Posted by Eric Harris at 5:24 PM