This one just barely squeaked by with a Kurgan.

Monsters is the latest low-budget indie film to catch the 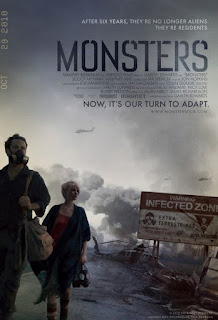 attention of film geeks, so of course I had to check it out, especially since it became available On Demand. With a budget of $500,000, Monsters is pretty impressive from a purely economical standpoint. As an effective film, however, it staggers a bit.
The story goes like this: an alien invasion occurred six years ago in Northern Mexico. The governments of both Mexico and America worked together to quarantine the area. That is the backdrop for the story of Samantha (Whitney Able) and Andrew (Scoot McNairy), a runaway daughter of a media mogul and a struggling photographer, respectively. Of course, these two have to navigate their way through the quarantined zone on their way to America.
The couple is short on cash, so they have to use (figuratively) underground methods to reach America. Are you sensing the irony, yet? Oh wait, did I mention the characters are American? Okay, now, how does this sound: two Americans forced to illegally enter America? Start asking about whom those titular monsters really are and you have yourself an allegory. If you’re picking up on a bit of sarcasm (and I imagine you are), it’s because I didn’t really buy into the message of this film. It’s not that the message is pointless or anything, it just felt heavy handed. Normally I would excuse a fault like this in a film, but the rest of the movie isn’t good enough to warrant a blind eye.
The problem with the rest of the film is that it is too meandering. Long scenes of boring travel interspersed with near encounters with alien creatures. That would be fine if there was more tension in the film. I just didn’t find the characters compelling enough to warrant so many long stretches of them walking, sitting, and talking. I didn’t care all that much about them and that is a vital component of a film like this.
Monsters is an alien movie, though, right? So what about these aliens? Well, the low budget aspect really sticks out with the creatures, which sometimes look painfully cheap. That’s forgivable for me because I loved the creature design. The aliens would be right at home in an H. P. Lovecraft story, with all of their tentacles and strange noises. The design worked for me, but you don’t get too many good looks at them, which I’m sure is due to the budget.
Despite some budget issues with the aliens, the rest of the film looks great. There are some truly beautiful images in this film. The image (slight SPOILER) of the border fence as seen from the top of an Aztec temple, though geographically questionable, is amazing.
Visually, the film manages to work and even though I found the characters weak, I was still emotionally connected to the story. That mind sound contradictory but it is what it is. I was compelled by the relationship between the characters but not by the characters themselves. I chalk that up to the chemistry between the actors. They may not be the most impressive performances of the year, but they were genuine enough for me.
Something else that worked for me was the editing of this film. I don’t mean that in terms of cuts and transitions, but in terms of order. I’m not one to ruin anything (so stop reading this paragraph now if you want to watch this movie “fresh”), but I will say that you should pay very close attention to the beginning of the movie or, if you have the chance, watch the first few minutes of the film again after it’s over. I just thought it was really cool what the filmmakers did there.
Speaking of filmmakers, I think writer/director Gareth Edwards has a bright future in the industry. I may have found his message a bit preachy, but I imagine his future projects will only feature better writing because an attempt to hide a message in an actual story shows that he is ambitious, and Hollywood could always use more ambitious writers.
Monsters ends up being slightly on my positive side, but not by much. I would suggest just waiting for this to rent or even show up on a movie channel. It has its moments, but it isn’t very memorable or even original, really. But it looks great despite its budget, has a cool editing twist, and features some interesting creature design. Be warned, though, this film is called Monsters because you’re supposed to ponder the title, not take it literally. Do not expect an alien action bloodbath; you will be disappointed. (For the record, I was not expecting said bloodbath, but I am aware others might.) This is just a little sci-fi film with a message and it’s worth a look, if you get the chance.
PS – I am very proud of myself for not mentioning District 9 a single time in this review. Oh, wait…damn it.
Posted by Eric Harris at 6:09 PM