They can keep making the same plot over and over again as long as it stays funny.

After the surprise success of the R-rated 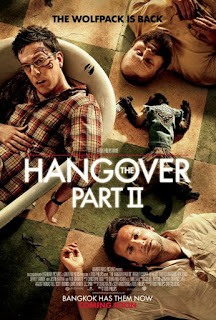 The Hangover two years ago, it became apparent that a sequel would happen. As with all sequels there was the fear that the filmmakers would rest on their laurels and phone in a bland, money-grabbing sequel. Thankfully, they focused on one-upping every aspect of the first film and while The Hangover Part II certainly isn’t original, it is very funny and manages to put Allen, Stu, and Phil through even crazier situations than the last time.

The Hangover Part II is nearly a carbon copy of the first film. It is about the same cast of characters and the same situation they were in the last time. This time Stu (Ed Helms) is the one getting married and it’s his soon to be brother-in-law who goes missing, but this time they are in Bangkok, Thailand. The setting is everything this time around (Bangkok is referred to as a character itself multiple times) as Bangkok is renowned for its ridiculous level of debauchery.

Normally if a sequel completely copies a previous storyline it would be awful, but this is a series about guys who party so hard they forget everything and lose a member of the group. To expect a sequel to drastically change that formula is a bit ridiculous. A comedy like this can only be faulted if it simply isn’t funny. Who is really watching this film and expecting some original, surprising plot? If that is what you expect, you should skip it. If you’re looking for laughs, it’s hard to imagine that you will end up disappointed.

The first film exceeded expectations because of a great cast. Ed Helms takes the reins of this one and the film is better off for it. He has perfected the art of the freak out and it is hilarious every time he shrieks in dismay. Bradley Cooper does a fine job as the calm member of the group as he tries to keep everyone on task. And fan favorite Zach Galifianakis keeps the man-child shtick of the first film going strong. Perhaps the film relies on Galifianakis’s appearance for laughs a bit too much, but the guy just looks funny. His appearance when he first wakes up is fantastic. Did we see that in the first one, though? Yes, but it’s still funny somehow.

The supporting cast should please most audiences as well. There are a few cameos and Mr. Chow (Ken Jeong) returns. Personally, I’m a bit tired of seeing Jeong (the guy seems to be in every comedic TV show and movie these days) so Chow’s appearance didn’t do much for me. The rest of the audience seemed to really dig him, though. One cast member who has to be getting a bit angry is Justin Bartha, the missing guy from the first film. You would think that he would be part of the gang this time around yet he still has to sit on the sidelines. There’s always hope for the inevitable third film, though.

The comedy of The Hangover Part II cannot be described in too much detail because no one wants anything spoiled (especially comedy) and most of the stuff that happens in the film is not fit for publication. This is a dirty movie, make no mistake about it. It’s a film filled with drug use, violence, and graphic nudity. As stated above, this film is all about going bigger. Take everything from the first film and give it a shot in the arm and you are left with The Hangover Part II.

This is not a flawless comedy, however. At times, it tries a bit too hard to be crazy. The inclusion of a cigarette smoking, drug-dealing monkey was humorous at first but quickly became too silly. A monkey does allow for some funny dialogue (people yelling about monkeys always makes me laugh), but there was no need to make the monkey some kind of unofficial fourth member of the group.

The Hangover Part II isn’t a comedy masterpiece, but it is very funny. The unavoidable question is, “Is it funnier than the first one?” It’s too early to tell on that one. Fresh out of the theater you may find it much funnier than the first, but it needs to sink in a bit before you start comparing the hilarity of both films. The fact that it’s hard to tell says something, though. It says that this is a worthy sequel. It’s nothing we haven’t seen before, but as long as you’re laughing, who cares?

Random Thoughts (SPOILERS)
Ken Jeong, please leave the series. I was sick of Mr. Chow by the end of the first film, but I understand that he had to make an appearance here because of how popular he's become. It looked like they had done something brilliant with him, though. He wakes up and gets ready to tell the guys what happened only to die before he can start the story. It was hilarious and unexpected...until it turned out he was still alive. Why didn't they leave him dead?

I loved how apparently Allen sees the world through the eyes of a child… it makes sense.

Mike Tyson was kind of silly at the end. But some people will enjoy his appearance.

All issues with Gibson aside, I think he would've worked out great in the cameo. Oddly enough, he has had a cameo before in which he had a lot of tattoos and piercings in Father's Day.

The Allentown song was great. Once again, yes it's just like the first film because Stu has to make up a song, but I thought it was funny.

“They shot the monkey!” I can't help but laugh at that line.

I dug the little health care dig: "Eight stitches and it only cost six dollars, how is that possible?”
Posted by Eric Harris at 2:33 PM