Refn Returns to the Weird with "Only God Forgives"

This is definitely one of those disturbing Chigurh movies. 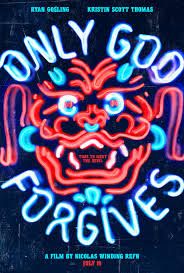 Nicolas Winding Refn got a lot of attention with Drive so it comes as no surprise that some people (critics, as well, I guess we count as people...) are disappointed with his latest film, Only God Forgives.  I am not discounting anyone's negative opinion of the film (opinions can't be right or wrong), but if people are upset because the film isn't all that much like Drive, they should take a second look.  If forced to compare the two films, I will admit that I enjoyed Drive much more than this film.  That said, Only God Forgives is the more challenging, and interesting, of the two.  Fans of Refn pre-Drive should definitely check this out.  But think more along the lines of Valhalla Rising than Drive.
Since I started off with comparisons to define this movie, I might as well take it one step further to give you an idea of what this movie is like, at least in tone.  I would describe it as Kubrick's The Shining by way of David Lynch's Blue Velvet.  This is a very psychological film, and a lot of the main character's inner conflicts are represented in a nightmarish hotel-type setting.  These scenes feature plenty of slow tracking shots as well, so that's where the Kubrick comes from.  It's kind of like Refn decided to keep going through the rooms in the hotel in The Shining instead of just glimpsing in at the weirdness (remember that strange shot with the dude in the dog costume?).  The Lynch comes from the randomness of the film, most notably the karaoke.  Yes, Only God Forgives features multiple karaoke scenes in which the audience watches in perfect stillness.  Think Dean Stockwell's rendition of In Dreams in Blue Velvet.  By the way, I don't consider these similarities a weakness in any way.  Refn still has his own style, and I love it.
Speaking of style, if you just want to watch this movie for some spurts of brutal Refn violence with some interesting uses of color all set to strange yet perfectly fitting music, then you'll be pleased with this.  If you want an easily accessible story to go along with that, you'll be disappointed.
Only God Forgives does a have a relatively simple revenge story since it essentially just about Ryan Gosling killing the cop (an incredibly menacing Vithaya Pansringarm) who allowed Gosling's brother to be killed.  But this is not a movie about Gosling going around beating dudes up.  Gosling barely speaks, for one thing (although he speaks more than One Eye in Valhalla), and his brother doesn't really deserve to be avenged.  Gosling's brother rapes and kills an underage girl.  On top of that, Gosling's basically evil mother (an easy to hate Kristin Scott Thomas) manipulates him at every turn.  In fact, Gosling isn't very likable either.  The film kind of feels like a revenge story told from the "bad" guys' perspective.  There's nothing wrong with that, though, and I find it pretty interesting.  Some people might want to like the protagonist, however.
The fact that the "hero" of the film isn't exactly into his quest nor do we want him to accomplish his task is strange enough, but Only God Forgives allows itself much more interpretation.  I don't want to posit any theories in a review, but when you look at the movie with characters representing some good and evil archetypes it gets pretty interesting.  If you're not willing to put a little thought into the film, some of it will be downright pointless.
Because of that, this is up there with Valhalla Rising as one of Refn's more challenging films.  It's still entertaining, but not nearly as fun to watch as Drive or Bronson.  But it leaves an impression, and it might make you think a bit.  And it's still Refn, so at the very least you'll get an interesting audio/visual experience.  Is it as good as Drive?  No, it's different.  It's interesting and challenging.  And sure, I'll watch Drive at least a dozen more times over the years, and I'm not sure if I'll ever watch Only God Forgives again.  But it's still worth checking out.  When Nicolas Winding Refn challenges the viewer it's not always fun, but it's definitely worth your time.
Random Thoughts (SPOILERS)
Wow, does Gosling take a beating in this movie or what?  It might be the greatest one-sided fight scene I've ever seen.  Although it is kind of hard to think of many one-sided fights in movies.  There's usually a slight chance the other participant could win...  Anyway, very brutal.
Completely dug most of the music, especially the fight scene music.  Drive still takes the cake in that department, though.  I might buy one song from this soundtrack, but I still listen to songs from Drive regularly.
Okay, might as well get into the theory that I think fits the most.﻿  I'll keep it short.  Gosling's mom is Satan and the cop is God.  This is why he seems almost supernaturally powerful and tends to dispense judgment (this is Old Testament God).  Gosling finally gets away from Satan's influence (and feels the need to reminisce inside the womb one more time...odd), and seeks forgiveness from God.  He wants forgiveness for killing his father years ago (confirmed by the mother), which is why he allows God to cut his hands off in the end.  This is his ultimate fear as early scenes in his nightmare/psyche/hotel foreshadow this punishment.  By the end, enough has happened to him that he accepts his punishment and it relieved/released.  Or whatever...
Posted by Eric Harris at 9:38 PM