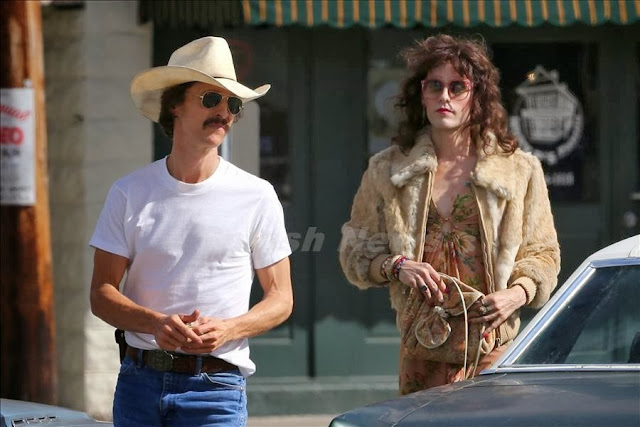 Movies like Dallas Buyers Club can easily become preachy, weepy messes.  A true story about the early days of the AIDS crisis.  Amazingly, the film ended up being informative, touching, and entertaining.  Everything about the film combined made it one of the best of the year, but the performances of Matthew McConaughey and Jared Leto truly set it apart.

Leto has received the bulk of the praise thus far for playing the transgender Rayon, and he deserves it, but it's McConaughey who gives the most impressive performance.  As Ron Woodroof, the rodeo hustler turned AIDS medication activist, McConaughey gives the best performance of his career.  It's easy to point to the physical transformation he went through as evidence of his commitment, but it's much more than simple weight loss that makes this performance.  Looking the part is only part of it.  McConaughey is believable both as a homophobic cowboy and as a sympathetic, caring activist.  You're sickened by him early on, but you come to love this character.  A bit of that is writing and the true story of it, but a lot of it is in the performance.

The true story of it all is a major selling point, too.  Ron Woodroof's partying, promiscuous life left him infected with AIDS at a time when a lot of the world thought only homosexuals were susceptible to the disease.  That misconception has, of course, been laid to rest.  Something from the early days of the AIDS scare that might not be apparent (at least it wasn't to me, maybe because I was a toddler during the time period of the film) is that the early treatment for the disease could potentially be more deadly than the disease itself.  Woodroof found this out through his own experience and also figured out a way to turn a profit from it.  The film covers his fight with the FDA as people sought medication in Dallas.

Dallas Buyers Club was certainly informative for me, but, more importantly, it was entertaining.  Perhaps it's because I expected a true story involving AIDS would be more somber, but I was very surprised how fun this movie is.  Maybe "fun" isn't the right word.  The point is that Dallas Buyers Club could have been some preachy/sobbing downer of a movie, but instead it kept things realistic.

The film has a realistic look to match the tone.  There are no grand shots.  A shot of McConaughey suddenly in Japan is presented in the same way as a shot of him in a parking lot in Texas.  It's how life is.  Just as there are no perfect set scenes in life or dramatic speeches, there are none to be found in Dallas Buyers Club, and the film is all the better for it.  The amazing performances may be getting all the attention, but there's so much more to this great film.

This film gets a: