Aaron Sorkin's "Steve Jobs" Is Elevated by Michael Fassbender...That's at Least Two Too Many Names for a Review Title. 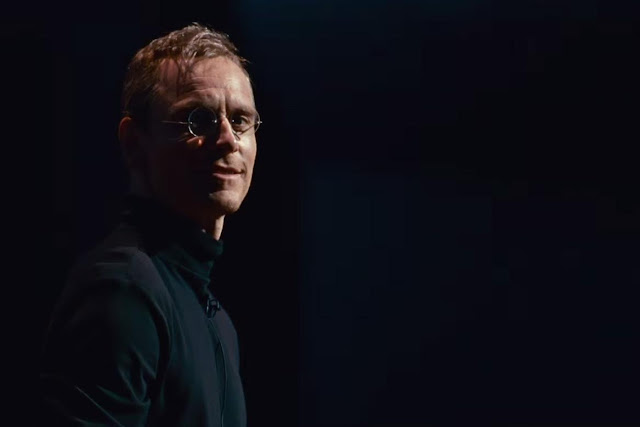 Steve Jobs is very much an Aaron Sorkin movie. It's not just because Sorkin wrote the script; it's because every second of it seems so calculated. Sorkin's scripts are famous for their rapid fire dialogue, and that's great, but sometimes they call attention to themselves because no one has actual conversations like the ones you see in Sorkin material. That's fine, but it can get distracting, especially when a film is pretty much a nonstop conversation.


Steve Jobs is structured around three launch events in Jobs's career. The film plays out in real time as he deals with a number of relationships: with his daughter (and her mother), Steve Wozniak (Seth Rogen), John Sculley (Jeff Daniels), Andy Hertzfeld (Michael Stuhlbarg), and Joanna Hoffman (Kate Winslet). The film effortlessly moves from one chaotic confrontation to another, all while painting a complex picture of Jobs's character. It's all very effective and perfectly cast. Fassbender is sure to be nominated for Best Actor (he might even win), and Winslet could sneak in there as well.

So why does it seem like this review is leading up to one big "But..."? Before I get to that, let me make it clear that I thoroughly enjoyed this movie, and it could possibly be in my top ten at the moment. That written, Sorkin's material just feels too structured. This feels too pretentious to type, but the film calls attention to how perfectly made it is. I was too aware of how much sense it made for flashbacks to be intercut mid-conversation, and how perfectly timed out each conversation was. I suppose it was the real-time factor of it. It came across more like a play than a film. Not that that is a bad thing. And the more I think about it, the more I like it. This is not what you expect when you watch a biography, and that's a good thing, because biographies have become incredibly boring at this point. This film, which focuses on Jobs's tumultuous interactions with those closest to him, shows so much more about who he really was through conversation than any other film could do through a factually accurate timeline.

Beyond the Sorkin-ness of the film, Fassbender elevates the entire film. He doesn't look or sound like Jobs, and that's fine. A performance should not be an impression. He's playing the role as a character, not as a person. That is important because is presenting Jobs's character, not necessarily his actual life. That might seem very troubling, but it is not in this case because Jobs does not need another proper biography after the Kutcher film (which actually isn't that bad), not to mention the documentaries. Fassbender made the role his own rather than try to impersonate Jobs, and the film is that much better for it.

Steve Jobs could easily be called a perfect film, which is not necessarily a good thing. Perfection calls attention to itself at times and takes you out of the experience. That happens at times with Steve Jobs, but it is forgivable because everything about it is so good: the dialogue, the editing, the acting, the pacing. You might be aware you're watching an Aaron Sorkin film the whole time, but that's not a bad thing.