*The main purpose of Why Do I Own This? is to take a movie from my (too) large collection and answer that question. I then decide whether or not to keep the movie. 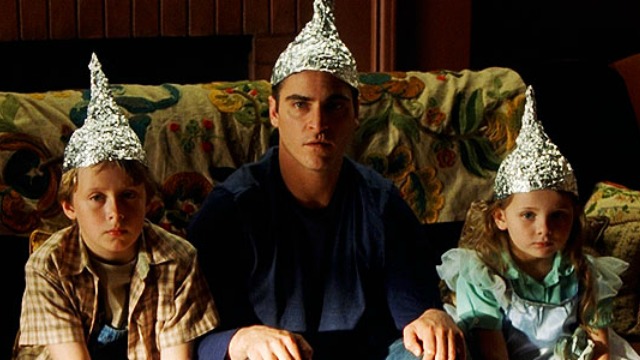 For this week, I went to my sci-fi shelf and came away with M. Night Shyamalan’s Signs. Re-watching this movie, a favorite of mine upon its release in 2002, is a perfect reason for doing these reviews. I watched this movie plenty of times soon after I purchased it fourteen years ago, but I had not watched it for years since then. I wondered if it held up, especially since Shyamalan fell from grace soon after this film (he’s made a comeback of sorts lately) and people were retroactively judging his early films more critically. It turns out, at least for me, that Signs holds up.

The main reason for my love of Signs is the basic premise: an alien invasion movie set in a secluded area. Alien invasion movies usually show a scene or two at a farm or other small town setting, but rarely do they completely take place there. “Signs” went for intimacy in a genre that typically goes big and broad, and the emotional payoff is much more satisfying than any explosion.

Nostalgia also plays a factor in my love for this film (and most films in my collection). My friends and I loved this movie when it came out. We thought it was creepy and funny, and we even admitted that it got to us on an emotional level (late 90s/early 2000s Mel Gibson has that effect on me). So watching this movie takes me back. The moments that gave me chills (the cut to a shadowy alien standing on top of the barn) still work. And the scenes that made me laugh (“Excluding the possibility that a female Scandinavian Olympian was running around outside our house last night…”) still work. And, I’ll admit, I still teared up at the end. Any movie that can do that the first time and the tenth time I see it is special.

When dealing with a movie from a few years ago, it’s impossible not to think about what has happened to the actors and filmmakers since the film came out. While watching this, I mainly thought about what changed for Joaquin Phoenix, Mel Gibson, and M. Night Shyamalan.

Joaquin Phoenix has been a favorite of mine since I noticed him in 8MM. His work a few years after Signs took an interesting turn. He devoted a year or so of his life pretending to leave acting to pursue a rap career as part of a hoax for a fake documentary. The documentary was definitely unique, but it turned out to be more of a waste than anything. Thankfully, he’s back now, and has recently turned in great performances in Paul Thomas Anderson’s last two films, The Master and Inherent Vice.

As for Mel Gibson, everyone knows what happened with him. His multiple, offensive outbursts, both public and private, nearly ended his career. For many, he’s still an unwelcome presence. Despite the public opinion about him, he has returned as well, though to a lesser degree of success than Phoenix. He has acted in a handful of features, but he does have a new directorial effort, Hacksaw Ridge, that appears to be an Oscar hopeful. Still, watching this movie made me pine for the pre-controversy days of Gibson.

Writer/director M. Night Shyamalan went through a rough phase, too, but his was based entirely on his work. After Signs, which does not have a twist (unless you count an alien movie actually having aliens a twist), he went back to the well with The Village. It turns out people were done with the twist endings of Shyamalan. Looking back, The Village was judged a bit too harshly, but it is definitely beneath Unbreakable, Signs, and The Sixth Sense. But he went way too self-indulgent with his next movie, Lady in the Water, which failed to find an audience. Then the wheels fell off with The Happening, which is laughably bad (I still regularly make fun of Mark Wahlberg playing a science teacher in that film [“Don’t you guys want to know what’s goin’ on with the bees?”]). The Happening was followed by The Last Airbender and After Earth. That unholy trinity made many write Shyamalan off. But The Visit received generally positive reviews, and his newest film, Split, is earning high praise at film festivals. Still, much like Gibson, I view this movie with sadness, knowing that it was an end of an era for an interesting filmmaker. But hopefully he keeps his current streak going.

Why do I own this? I loved it in 2002, and I love it in 2016. I even like the opening credits, and I remember kind of hating them the first time I saw this. So this is that rare movie that has improved with age. I’ll definitely be keeping this one.

Captain America: Civil War – I finally got a chance to see the biggest movie of the year. I liked it, of course, but it didn’t blow me away. I think I’m getting Marvel fatigue. Still, it’s enjoyable, and everything about it works. I really enjoyed the new Spider-Man. I can’t believe I’m looking forward to a third incarnation of Spider-Man already, but somehow I am.

Email ThisBlogThis!Share to TwitterShare to FacebookShare to Pinterest
Labels: Captain America, Joaquin Phoenix, M. Night Shyamalan, Mel Gibson, Popstar, Signs, Why Do I Own This?