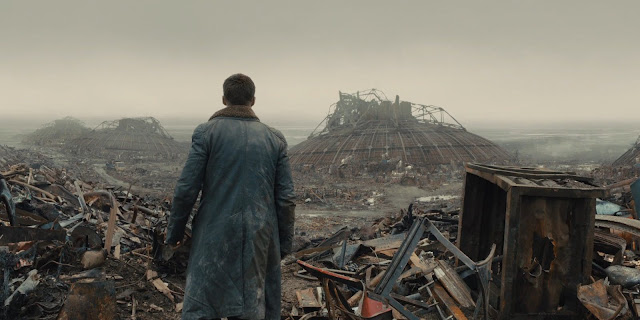 (This site is supposed to be about movies I own, but I'm making an exception for this Blade Runner 2049 review since I will own it when it is released on blu ray.)

Returning to beloved films from decades ago usually results in disappointment. But thanks to a recent influx of new films that continue the franchise (Star Wars, Alien) rather than reboot it, the results have been a bit more satisfying. Still, revisiting Blade Runner seemed like a bad idea. There's not much to the original film that begs for a sequel. In fact, one of the most interesting aspects of the film is the unanswered question of whether Deckard (Harrison Ford) was a replicant. It seems like a sequel featuring Ford would be problematic for that question. Also, the first Blade Runner was not an action movie. It was a moody noir set in a dystopian future. Would Hollywood allow a sequel to be made without turning it into an action film?

Thankfully, the filmmakers (director Denis Villeneuve, producer [original director] Ridley Scott, and writers Hampton Fancher [original] and Michael Green) handled things beautifully. They do not answer the question of Deckard. In fact, they add more to the debate for both sides of the argument. And, more importantly, Blade Runner 2049 is nowhere near an action film.

The plot, which I'll be vague about since the studio left it very vague in the promotional materials, is in the same vein as the original, playing out as a simple detective story in a complex, visually stunning setting. While the plot does add plenty of questions to the series and brings up plenty of existential themes concerning humanity and technology, the true appeal of the film is its style. 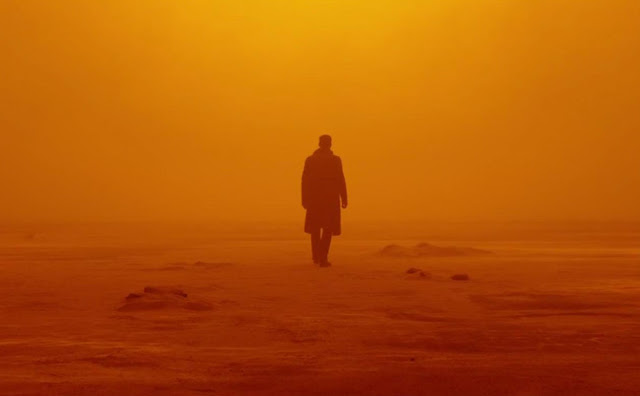 Director Denis Villeneuve (Arrival, Sicario) was the perfect choice to succeed Scott in the director's chair. He has proven himself a master of tension and mood already, so it was great to see him set loose with a large budget in an already richly designed world. I rewatch the original Blade Runner on a yearly basis because of the world of the film. Blade Runner 2049 takes that bleak future and turns into perhaps the bleakest future in a film that isn't post-apocalyptic; perhaps it could be described as pre-apocalyptic. It's interesting that such an ugly moral world can be so beautiful. Villeneuve and director of photography Roger Deakins take massive landfills, radioactive cities, and bleak farmlands and turn them into cinematic wonders.

The visuals, which are a perfect blend of CG and practical effects, are amazing on their own, and the nearly oppressive score (which rattled the speakers of my theater regularly) is the finishing touch. A world is only beautiful if you get to spend plenty of time in it, though. This is where critics (and Blade Runner fans) and a typical audience member might differ in opinion. Blade Runner 2049 gives you over two and a half hours in its bleak world, with many sequences consisting solely of Ryan Gosling walking slowly. I see that and can't take my eyes away because I want to examine and enjoy every frame of the film. Others might see that and want to yell, "Do something!"

Perhaps the best way I can describe how interesting I found this arguably "boring" film is this: I went to see this after working a twelve hour night shift. I went to the earliest show I could, which allowed me to get two hours of sleep beforehand. I've done this with other movies and could barely keep my eyes open no matter the type of movie I was watching. Yet with Blade Runner 2049, I didn't so much as yawn a single time. I was truly worried I would fall asleep when I first planned to watch this lengthy film under those conditions. When I walked out of the theater feeling completely awake, I knew I had seen something special.

Although the visuals, pacing, and music were the stars of the film for me, that does not mean the performances were lacking. Gosling is perfectly cast in the lead role. Harrison Ford is fine as the aged Deckard (though it seems like he's just being Harrison Ford instead of the actual characters he's returning too). Jared Leto was oddly zen-like in a villainous role, but he was underused. The standouts are the female performers. Robin Wright turns what could have been a one-note boss character into fully realized character. Sylvia Hoeks provides quiet menace as Leto's muscle. And Ana de Armas gives possibly the best performance as Joi, an AI girlfriend.

With all of this praise I'm giving Blade Runner 2049, you might think it's obvious that I prefer it to the original film, but I'm not sure yet. My impulse is to declare this the better film, but it will take time to truly tell which film has the more lasting effect. The original Blade Runner didn't catch on for years. So maybe my opinion of this film will change over the years, as well. I doubt it, though. Like most films that I love, my immediate thought as I walked out of the theater was, "I can't wait to see this again." I think my yearly viewings of Blade Runner just became a double feature, and Blade Runner 2049 is definitely one of my favorite films of the year.

Unfortunately, this is probably the last Blade Runner for a while since it's underperforming at the box office, but I'm okay with where it ended. It definitely felt like a few things were set up for future installments, but it didn't end on a cliffhanger or anything. You can imagine where things go from that ending. But I do wonder if they ignored Leto's character at the end in hope of a sequel. Or maybe they introduced that replicant underground group to be expanded upon in the future. Either way, it stands on its own as a great movie.

Gosling was meant to play a Pinocchio-like replicant.

The Joi character reminded me of Her quite a bit. It's still an interesting plotline. At times you're watching a robot interact with a hologram. The fact that these two "lifeless" characters make up a big portion of the films says something about the overall question the film posits: What is humanity?

Man, Los Angeles is bleaker than ever. You can imagine if most people had moved off-world back in 2019 how bad it must be by 2049.

So is Deckard a replicant? I think he's human at this point, though I thought he was a replicant after watching the original. It's not the aging that makes me thing he's human; it was the scene with him in the car as it submerged. If he was a replicant, he would have easily gotten out of the handcuffs. Of course, Tyrell could have made him pretty much identical to a human in all aspects if he was capable of making a replicant able to procreate. Perhaps Deckard and Rachel were his replicant Adam and Eve... Okay, maybe Deckard is a replicant after all.
Posted by Eric Harris at 9:42 PM