"NewsRadio" - Or Any TV Series, Really. 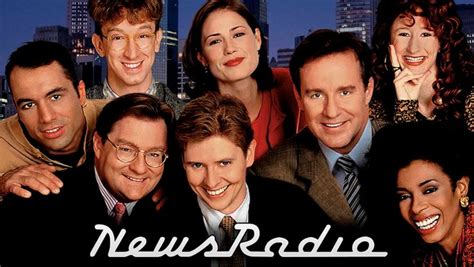 As I look through my collection, there is one large section I (mostly) regret: full seasons of TV shows. This article is going to be about one series that I actually bought twice: NewsRadio. But it could have been about any number of shows, such as Battlestar Galactica, Family Guy (the first six seasons), Futurama, Breaking Bad, Mad Men, Deadwood, Game of Thrones, Space Ghost, Sealab 2021, Arrested Development, Aqua Teen Hunger Force, Kings (Remember that show? It ran for one season on NBC, and I bought it. Why?!), etc. It’s not that I’m embarrassed that I own any of these shows (well...Kings), it’s just that it’s largely pointless in the age of streaming. I rarely buy seasons of shows now (aside from Rick and Morty, and I bought the first season of True Detective when I found it for $6), but 10+ years ago, the main way to rewatch your favorite shows was on DVD. Now, though, it seems silly to deal with all of those discs when you can just get on Netflix, Amazon, HBOGO, on demand, Hulu, etc. and binge-watch a show.

There are exceptions to this, and NewsRadio is one of them. I’m not sure why, but I’ve only ever seen NewsRadio available for cheap/free streaming on Crackle, and even then it was only select episodes. NewsRadio is my favorite TV show of all time. I watch the series in its entirety at least once a year. I needed to buy the complete series again because some of the discs I originally owned were too scratched to watch (I could buy the series digitally on Amazon, but it would end up costing nearly $70 while the DVD of the complete series is just over $20 right now). I’ll try to explain why I love this show so much in the following paragraphs, but I want to point out a couple more reasons to still own a TV show.

With NewsRadio, I have to own it if I want to watch it at all. With a show like Rick and Morty, I want to own it so I can watch it unedited. I find the show more enjoyable when I can actually hear all the cussing. With True Detective, I wanted to watch the bonus features, plus I may not always have HBO, so it’s nice to have a backup plan.

In general, it seems weirder to own a season of TV than a single movie. A movie is a minor commitment. A TV show, especially a network show with 20+ episode seasons, takes time. And time is something that is in short supply when you get older and have kids. So why do I make that major commitment to a show like NewsRadio even now? For one thing, I’m nostalgic for that period: the 90s. I was ten years old when the show debuted, and I was just discovering sarcasm, which is the main character’s primary form of communication. It was, and still is, a very smart show. But more than anything, and like any other great show, the characters were well developed and seemed like real people by the end of the show. Star Phil Hartman’s death before the final season made this even more evident as the characters mourned him in the first episode afterward, and it truly felt like a memorial both for the actor and the character he portrayed. NewsRadio was like The Office if it had been less sentimental, less serialized, and made in the 90s.

The Office is a good comparison for another reason: I love it but also consider it disposable entertainment. That’s what I usually look for in a series that I re-watch. If I’m rewatching NewsRadio or The Office, it’s while I’m doing something else. I can do dishes, laundry, cook, write, browse the internet, etc. while an episode plays, and if I happen to have not paid attention to a single second or an entire episode, no big deal. Whereas if I’m rewatching something like Battlestar Galactica (which I’m in the middle of on Amazon Prime right now), even though I’ve seen it before, I feel compelled to pay attention to every moment. That’s a testament to the quality of the show, but it’s not exactly relaxing. NewsRadio is my all time favorite relaxation show.

It truly is the cast that does it. Dave Foley, Phil Hartman, Maura Tierney, Vicki Lewis, Khandi Alexander, Andy Dick, Stephen Root, and Joe Rogan became so comfortable in their characters that it was just nice to sit back and watch them play off each other. Like most workplace comedies, it’s nice to sit back and feel like you’re watching them all hang out.

When the show first aired, it was my first experience with edgy television. Sure, by today’s standards NewsRadio is incredibly tame, especially since it has a laugh track. But for the time, it had a bit of edge I had never seen before. Also, the creators were pretty rebellious about the typical gimmicks expected of such a show. The will-they/won’t-they plot between Foley and Tierney was immediately addressed rather than drug out for seasons. Sure, they used their relationship for plot lines throughout the series, but at least it wasn’t a Ross-Rachel/Jim-Pam thing. And when the network wanted a tie-in story to go with Four Weddings and a Funeral, they wrote an episode about a rat funeral. The crazier episodes were great, as well. There were a few hallucinatory episodes like when everyone has a crazy memory of why Catherine left or when they were all losing it because of a heat wave. But they also had in episode that took place in outer space, and there was an episode that took place on the Titanic.

But it all comes back to the cast, and for me, the force behind the show was Phil Hartman. He was already, and still is, my favorite cast member from SNL, but NewsRadio solidified how hilarious he truly was. His typical persona on the show was an overconfident prima donna, but it was when he flew into a rage that cracked me up the most. His outburst at Andy Dick during the smoking episode it easily my favorite moment from the series.

Of course the show suffered after Hartman’s death, but season five isn’t as bad as many remember it. Sure, Jon Lovitz’s character is annoying (what Lovitz character isn’t?), but there are some great episodes from that season, my favorites being the one with Smatthew (Smart Matthew) and “Stinkbutt” (a phrase I use nearly daily...don’t judge me). Also, the creators had a feeling that season five would be the last (this was actually a yearly concern for them), and they went for broke with the wackiness. Aside from the aforementioned episodes, there was also an arc that revealed Stephen Root’s character was possibly (probably) D.B. Cooper. This is even crazier when you take into account that it was revealed in a previous season that he was also Deep Throat.

It’s impossible to fully convey just why this show speaks to me so much, but I will finish up by listing in no coherent order my favorite moments and lines from the show as they occur to me with no context whatsoever. “Gizzizah, my dilsnoofus!” “Rocket Fuel Malt Liquor, DAMN!” The fact that Bill’s real first name is Evelyn (which is also my daughter’s name, which I now think was a subconscious choice, on my part). “If what you’re saying is true, then I still don’t care.” Jimmy James: Macho Business Donkey Wrestler. “So just zip your sniveling lip and HAUL YOUR SKINNY ASS OUT OF HERE!” Stinkbutt. Goofy Ball. Matthew’s moustache. Toby Huss and Tone Loc as the guards. Bill’s hatred of midwestern niceness. Bill’s increasingly disturbing childhood, including crunchy sandwiches and doughnuts. “All my sweet bitches hard at work.” Okay, I need to stop this, but I could seriously go on for another five hundred words or so, but I’ll finish with the line that hooked me when I was a kid: “You’ve got more paranoid fantasies than Stephen King on crack!”

I think everyone has a show like this that they love. Mine just happens to be Newsradio. As for buying entire seasons of shows, maybe I'm wrong. Streaming is convenient right now, but it looks like every network or production company is wanting to start their own service, so maybe one day DVDs will be the easiest and cheapest way to watch a show again. I'm probably wrong and most of my collection will likely collect dust until I throw it out in the distant future. But I'll always hang on to my NewsRadio DVDs.