Herzog/Kinski #1: "Aguirre, the Wrath of God"

*As always, these articles are filled with SPOILERS. And I usually refer to the actor rather than the character, but I mean the character...but with this movie I think the line between Kinski and Aguirre is blurred a bit. 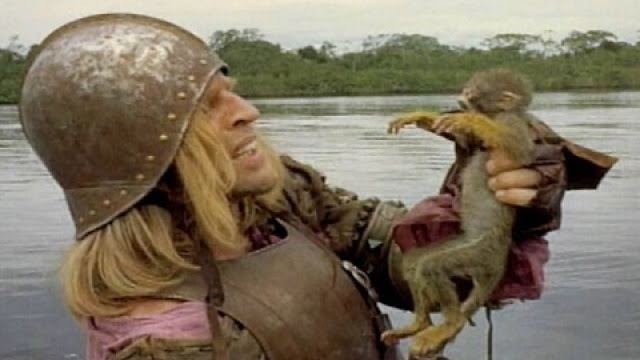 I decided to write about this Werner Herzog / Klaus Kinski boxed set I’ve had for years for two reasons. 1. I rewatched Bad Lieutenant: Port of Call New Orleans (fun fact: the title in the actual film includes The at the beginning, but nowhere else is that referred to), and Nicolas Cage’s crazed and oddly physical performance reminded me of Kinski. 2. I still haven’t watched all the movies in this set, which is a whole other subset I could write about (my never watched Mel Brooks collection comes to mind).

So I watch Aguirre, the Wrath of God again, and I remember how much I love it, etc. But as I’m doing research, I come across an accusation made by his daughter that he sexually abused her for years. I’ve always considered Kinski to be a crazy asshole, but this is another level of pure evil. I have no reason to believe his daughter would make such a thing up. I believe her. That written, aside from My Best Fiend, which I’ll write about last, I will be writing about these movies based on the performance, and the stories from the set that Herzog tells. Although, there is an element at the end of Aguirre I have to mention in which Aguirre fantasizes about starting an empire with his daughter as his queen. I can’t help but think about the allegations against Kinski, but I also recognize that the line was written by Herzog. Either way, I felt the need to address the issue. 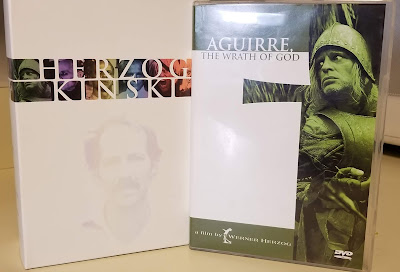 Werner Herzog is as much a documentarian as he is a feature director, and Aguirre is an example of those worlds combining. Many times the camera lingers on the jungle or river for much longer than usual. The entire film is meandering, giving it a documentary feel, which adds a haunting realism to this insane story. Some could easily dismiss this film as boring, but if you’re on board with the technique, then you see that Herzog has made something quite special.

Because of the nature shots interspersed with a narrative, the easy comparison to make is to Terrence Malick. I like Malick, though it took me years to come around to his style (even so, I’ve found his films since The Tree of Life to be almost unwatchable). I don’t compare Herzog to Malick to make any kind of claim about Herzog influencing him or anything. I make it because it’s a good way to draw a distinction about Herzog’s films. Where Malick’s narratives are disjointed poetry interspersed with nature, Herzog still tells an interesting, straightforward story.

This isn’t to say that Herzog’s films are simpler or better; I just find them more interesting and entertaining. It also helps that Herzog is more interested in insane ambition, following characters like Aguirre and Fitzcarraldo as they go on their absurd quests. With Malick, he seems more interested in the people that get dragged along the quest, like soldiers in WWII or Jamestown settlers. Both are interesting, but Herzog goes with the bolder subject matter, and his films are more dynamic because of it. Of course, it helps to have Klaus Kinski in the film. I’m not sure what Malick would’ve done with Kinski... 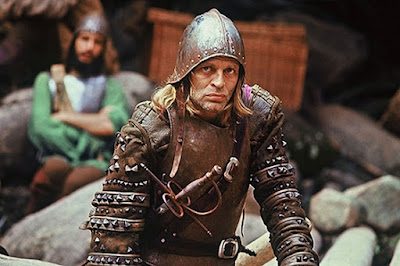 My recent obsession with Nicolas Cage led me back to Herzog / Kinski. I was watching Bad Lieutenant: Port of Call New Orleans, and I had forgotten how weird Cage’s performance gets. Of course, there’s the usual stuff: screaming, odd line reading, psychotic staring, etc. But in the second half of the film, apparently due to his character’s back pain and drug use, he begins walking and talking differently. He walks like a zombie through most scenes, and he seems to be doing a kind of Jimmy Stewart impression when he talks. It’s great. And it reminded me of Kinski’s odd physical performance in Aguirre.

I am more of a fan of Herzog than Kinski, but it’s undeniable that these two combined brought out the best in each other on film while bringing out the worst behind the scenes. For this film, according to Herzog, Kinski wanted to play Aguirre like an unhinged, raving madman. Herzog wanted him to play a more quietly menacing figure, so he let Kinski do multiple takes at full energy until he tired out. Then the scenes done when he is exhausted are the ones Herzog used. And it’s the right decision. Sure, Kinski still has his freak out moments (yelling at a horse and nearly killing a cast member with a sword come to mind), but the best moments are when he’s quiet.

Kinski can be intimidating when he’s freaking out, but he’s truly creepy when he’s silently staring. It’s like the shark in Jaws: what you imagine Kinski can do is more unsettling than what he actually does. Both types of his performance make the film interesting. Without Kinski’s dual performance, this film can be quite boring. But I can take all the nature shots in the world as long as I also get to see Kinski crab-walk over to an about-to-explode barrel and give it the strangest toss I’ve ever seen. He’s a terrible man, but his performance carries this film.

I have a weird love for jungle movies, which is strange because traveling for days down a river in a jungle seems like the worst thing in the world to do.

My love of films like Apocalypse Now drew me to Aguirre. I loved this film immediately. Movies that not only take place but are also shot in the jungle fascinate me (The Lost City of Z was one of my favorites last year). From a narrative standpoint, there’s always the element of ambition/insanity. But just as importantly, there’s an element of ambition/insanity in attempting to film in the jungle. What’s happening onscreen in Aguirre is fascinating, but equally fascinating is imaging what things were like behind the scenes. I don’t just mean the Kinski/Herzog shenanigans (Kinski firing a gun, Herzog threatening to kill him); I mean the logistics of filming a movie that primarily takes place on raft in the Peruvian jungle.

Auch ambition is admirable, but both narratively and cinematically it says something about the drive of humanity. This is why I find Aguirre darkly comical. The delusions these men so quickly delved into once they decided to go along with Aguirre’s plan of breaking of from Spain. They travel through this inhospitable land, claiming acreage as they go, hoping to come across a city of gold at any moment. Perhaps it’s hindsight to dismiss them as stupid, but it’s certainly accurate to declare them, and the conquistadors in general, as ignorant profiteers who thought they controlled the world. The jungle is the great equalizer.

From a filmmaking standpoint, trying to film in a jungle is slightly delusional, as well. Nothing about it seems natural. But the challenge yields better results than what the characters for in the end, of course. When Herzog finished his journey in the jungle, he was left with a great film. The followers of Aguirre found only insanity and death.

The insanity with Herzog is not that he filmed in the jungle (or that he returned there again with Fitzcarraldo), it’s that he continued to work with Klaus Kinski after this. These two men had some strange connection that most people would avoid, but Herzog embraced. I’m glad he did, but in doing so he seems insane to me. Why keep venturing into that jungle? As I work through the rest of the collection, I’ll continue to revisit that question.

English or German? This was filmed in English, but the DVD prefers German as it’s the only audio in Dolby. I just want to hear Kinski’s actual voice, but he didn’t do his own German dub. I always end up watching the English version even though the difference between the dialogue and subtitles drives me crazy.

The most German-looking man in history playing a conquistador…this would definitely count as white-washing. But I would argue that Kinski is playing a crazy man before he’s playing a Spanish man. And we know he’s over-qualified to play insane.

Really wish that dude knew more than one flute song…I’m fairly certain that the repetition of that song drove many of them insane.

The movie has very little planning. Let's go to the jungle and make a conquistador movie. We'll figure out the shots and whatnot when we get there. What a Werner Herzog thing to do. On the commentary he claims he has never made a stroyboard.

The full aspect ratio threw me off the first time I watched this. I was a stickler for widescreen back in the days of VHS and DVD, when films would be pan and scan. I always assumed all films were meant to be in widescreen. This was one of the first movies that made me realize filmmakers make a choice when it comes to the size of the screen.

Don Fernando is just as crazy as Aguirre, but for him it's mainly due to stupidity. Carvajal is blinded by religion. This film is filled with insanity.

No way you'd be able to treat a horse like that today...or actors, for that matter.

A great film of quiet insanity.

It turns out the boat in the tree was part of a cut sequence, but Herzog left it in and used as a possible hallucination. It’s that kind of loose planning that I love about his work.

I could watch Kinski limp around chasing monkeys for an entire film. Okay, not really,  but I could watch five to ten minutes of it.

Commentary: “Did you do a lot of research?” Herzog: “No. Not at all.” This is what I love about Herzog’s films. He just does whatever he feels like. He doesn’t feel bound by historical fact or narrative sense.

Herzog seems to need the interviewer for the commentary, but it's a bit of a letdown as his narration of his documentaries is so great.

Next up: Nosferatu: Phantom der Nacht, one of the two films in the collection I never got around to watching when I bought it.
Posted by Eric Harris at 12:34 PM