It’s late in the month, but this is still just my first movie article of January, so it’s Van Damme time again. I always get pretty burnt out at the end of one year and the beginning of the next, and this year was no different. Add political bullshit and a pandemic to it, and I just can’t find the motivation to write much about movies. But I’m fighting through the burnout. After this article, I have three Godfather articles on the way. Then I want to check out the new cut of Apocalypse Now, and I’ll follow that up with The Age of Innocence and Barry Lyndon. This is pretty ambitious for me because these are all big, complex movies. So expect this to take a little bit, and also expect some random articles to get peppered in here and there. But before I get into all that, I need to write about another Van Damme twin movie.

Maximum Risk is a Van Damme “twin” movie, but they never share the screen together, unlike in Double Impact and Replicant (from the same director as this film, but technically the twin is a clone). Because of this, Maximum Risk is the forgotten Van Damme twin movie. Well...it’s forgotten in general. I do consider this my least favorite of the twin trilogy, but it’s still a quality Van Damme movie. I like to think of it as an alternate version of Double Impact.

Double Impact was about twins unknowingly separated at birth. One ended up living a life of crime while the other lived a pampered life. It’s one of my favorite Van Damme movies because you get a typical Van Damme character and you get a borderline villainous Van Damme character. It’s the best of both worlds.

Maximum Risk takes that basic premise even further by making the “good” Van Damme a cop. But rather than repeat the formula of Double Impact and have the two seemingly opposite brothers team up, Maximum Risk kills off the criminal brother, Mikhail, in the opening action sequence. Mikhail’s twin brother cop, Alain, then spends the rest of the movie trying to avenge the brother he never knew by infiltrating the Russian mob in New York, uncovering corruption, and seducing Mikhail’s girlfriend along the way. You know, typical Van Damme shit.

Getting to see a Van Damme character actually die, especially in the opening scene of a movie, is interesting, but having an entire movie with two Van Dammes would have been better. I applaud the filmmakers for going the route they did to avoid ripping off Double Impact too much, but the film suffers for it. Instead of having two Van Dammes working off each other, we get Natasha Henstridge in such a girlfriend role that she just starts banging the new Van Damme, and we also get an annoying cabbie character for a few scenes just so Van Damme has someone to clash personalities with (and he’s killed off right when Henstridge joins the team).

It just doesn’t make sense. Why tease us with two Van Dammes? Who cares if the movie is similar to another Van Damme movie? Most people don’t know the difference between Kickboxer and Bloodsport (or The Quest, for that matter) anyway. And any movie with Van Damme as a set of twins is going to remind fans of Double Impact anyway. They should have just gone for it. The tone of the film is enough to warrant keeping both Van Dammes alive. Double Impact is a pretty goofy movie and Maximum Risk is fairly dark and serious. I would like this movie much more if it was simply a darker Double Impact.

Van Damme’s movies typically have simplistic titles that work for the genre (Kickboxer, Bloodsport, Timecop, Sudden Death, etc.), but there are also some bland-ass titles out there that could apply to any action movie. Maximum Risk is definitely one of those.

After watching the movie, I couldn’t figure out what the titular maximum risk was. Sure, the film was filled with risky situations, but it’s not like people kept telling the main character he was taking too many risks or something.

According to IMDb, the original title was The Exchange, but they were worried that audiences wouldn’t get the “subtle title.” So they changed it to Bloodstone (which doesn’t make much sense, either) and even marketed the film under that title. Then someone decided that didn’t work, either, and they settled upon Maximum Risk. The fact that the title could be changed twice after the film was complete says it all. And I honestly can’t think of the perfect title for this film, but I do know that The Exchange is better than Maximum Risk. Just for fun(?), here are some other non-titles from Van Damme’s filmography:

Kill ‘Em All - This might apply to the actual movie (I haven’t watched this one yet), but I feel like you could apply this title to at least a dozen other Van Damme movies (including Maximum Risk) and it wouldn’t matter.

Soldiers - This is the title on IMDb, but Full Love is listed as an alternate title, and the picture on the main page has the title The Eagle Path. And when you Google it, it claims the movie is called Frenchy. What the fuck is going on with this one?

Swelter - This one makes a little sense since the setting is hot throughout, but it’s not that integral to the plot.

Until Death - This one is about someone dealing with a near-death experience, but it’s still bland enough to work as a title for most Van Damme movies.

Wake of Death - This is a revenge movie, so it works, but there are plenty of Van Damme revenge movies that could use this title, too.

Alain Moreau and Mikhail Suverov. Both are fine. Alain is a French cop, so that works and explains the accent. Mikhail also works as a believable name since he was adopted by Russians as a baby. 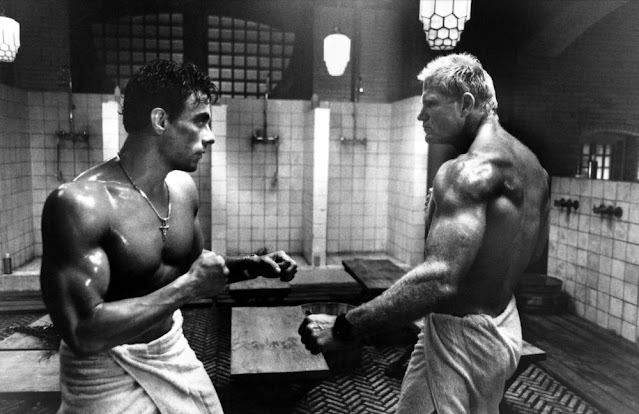 What the fuck is with the neurotic-aspiring-author-cabbie? Does he attempt to get involved in the lives of every fare he picks up?

I get why Ringo Lam zoomed in on the dude's glasses in Van Damme's twin's old neighborhood (showing two Van Dammes in the reflection of the lenses), but damn is it out of place.

I always feel bad for the unlucky fucker who parks his car near a Van Damme fight.

Did not expect a Bret Easton Ellis name drop in this movie. The screenwriter must be a fan.

Zach Grenier as an evil Russian mobster? I like it.

What a gentleman. Van Damme lets the makeout session with Mikhail’s girlfriend get to the point that she’s topless before he finally stops it.

Remember when Natasha Henstridge was a thing for about two years in the ‘90s?

The fuckin’ bad guy starts roughing up the cleaning lady about Van Damme’s whereabouts. They’re not in their room, and you were just in the lobby. Figure it out, shithead.

That’s a crazy amount of gunfire on a crowded New York street. There must be dozens of people dead or injured.

The cabbie definitely saved their asses, and his death is actually pretty sad. But from a movie standpoint, I was glad to see him go because his “I’m a writer” schtick was annoying as hell.

This must be the tenth movie with Van Damme being pursued by government goons.

When Van Damme’s beating the fuck out of the bald goon in his dead brother’s apartment, he tosses him into a jacuzzi. I have two issues with this. 1. The jacuzzi was in the bedroom. That seems...odd. 2. It was full. Did Mikhail leave it full before he left for France? Did the goons staking it out take a bath? What is going on here?

It’s not a Russian mob movie unless there’s a bathhouse scene.

Not that I’m wanting to see some dick, but those towels around their waists in the bathhouse fight scene must be tied with triple knots.

Eastern Promises is basically just a dicks out remake of this movie.

You know you’re shoehorning in a sex scene when it’s between a woman and her dead boyfriend’s long lost twin in a bathroom with two FBI agents in the other room.

Elevator opens to reveal Van Damme fighting a giant Russian with a knife. The giant Russian yells to the people, "Get the fuck out of here!" as if the people were going to seriously attempt to get on that fucking elevator.

Who's chasing who in the final action sequence?