Dying of the Light and Dark

Paul Schrader, who made a name for himself as the screenwriter of Taxi Driver, has slowly become one of my favorite filmmakers. He’s been active for years, but only with his most recent work, First Reformed and The Card Counter, has he truly struck a chord with me. Both films made my top ten of their respective years, with First Reformed being my favorite overall film of 2018. Schrader makes darkly serious, interesting films in which anything can happen. These last two movies draw me in and hold my focus as few other films do.

If his recent work impressed me so much, I assumed I must’ve been missing out by not seeing his entire filmography. As I worked my way through it, I immediately came across a bit of controversy with Dying of the Light.

At first glance, Dying of the Light is just another Nic Cage cash grab that doesn’t even deserve a trailer watch. But it’s written and directed by Paul Fucking Schrader! With that in mind, I decided to give it my full focus.

The story is compelling: a CIA operative dealing with a deteriorating brain disorder attempts to track down and kill his former terrorist adversary, who is also dealing with deteriorating health. The basic story is enough to hold interest, and the subtext of it all, dealing with what honor and loyalty mean, but more importantly what does anything mean in the end. Add a typical idiosyncratic Cage performance along with one of Anton Yelchin’s last appearances, and you have a decent enough film.

But that was it. It was okay. Then I read the IMDb trivia which led me to an Indiewire article that made things much more interesting. 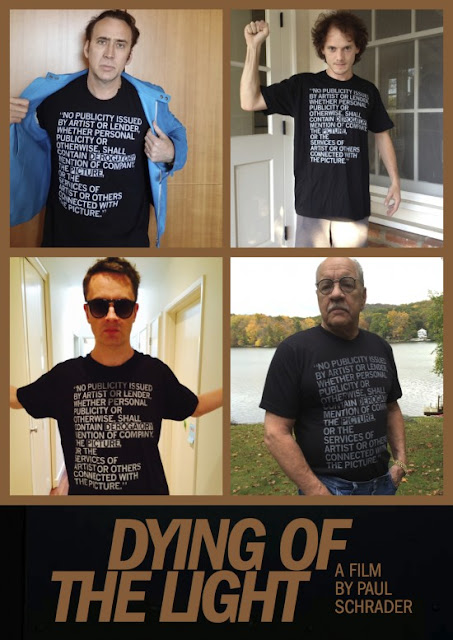 Feel free to read the linked article above to get the full story, but for now, here’s the gist: apparently, Dying of the Light was taken away from Schrader before he could finish editing and color-correcting the film. Schrader hated the released cut so much that he wanted his name taken off it (but couldn’t because of some guild rule or something). Schrader, Cage, Yelchin, and (executive producer) Nicolas Winding Refn all took to social media wearing t-shirts with their NDAs printed on them, which was their way of protesting the release without technically protesting it.

Since Dying of the Light is hardly as popular as something like Justice League, there was no call to #ReleaseTheSchraderCut. This didn’t stop Schrader. Using only the material he had access to (which was workprint DVDs), Schrader made what he considers a new film. Using a much more unique editing style (he had to straight up film the screens in the editing bay to create new shots), Schrader made his new film, which would only be available at UCLA and UT Austin.

Since I don’t plan on visiting either of those colleges any time soon, I figured I would never see this film. But then I read about Schrader releasing it online, and after a few searches I was able to track it down and watch it. (I’m not going to link to it out of fear of encouraging piracy and the likelihood that the place I found it at won’t have it for long, anyway. But if you’re interested, this movie can be found.)

The Light or the Dark?

There are two striking differences between these cuts (which I don’t really think should be considered two different films). The first is that Schrader was able to add the color tones he originally wanted, which means most of the scenes in America are drenched in sepia, the scenes in Bucharest are blue and green, and Africa is so yellow the scenes there have a sci-fi feel to them.

The use of color makes this a much more visually interesting film than the studio cut. And the newly added scenes explaining the health conditions of the protagonist and antagonist (narrated by Ethan Hawke) use color to show their issues. So there is a thematic quality to it, not to mention a sepia tone for America says plenty about what Cage’s character might think about in regards to the past of America and how perhaps we see our country through this sepia-toned nostalgic lens and we see other countries through harsh and strange colors. In other words, the use of color adds a lot to the film.

The other main difference is that Dark is much more about Cage’s deteriorating condition than it is about a CIA agent going after a terrorist. (SPOILERS ahead, but seriously, who the fuck is reading this that hasn’t seen at least the studio cut of this film? But I am going to spoil Dark, too, so I guess there’s that.) Cage’s moments of confusion are portrayed in a much more cerebral manner. Due to the editing and sound, the scenes become more and more disorienting as Cage gets worse. This culminates in Cage having a full blown 2001-like descent into full deterioration. This happens during his meeting with the terrorist at the end, then the film cuts to his grave. In the studio cut, he leaves after having a bit of an episode, allowing Banir to live. Then Banir retaliates, causing Cage to go back and kill him. On his way back, he turns into oncoming traffic, literally dying of the light (in this case, the headlights of an oncoming truck). I suppose he dies of the light in the Dark cut, as well, but in a different manner.

There are a few other differences, too, including a couple additional scenes. One has Cage visiting a catatonic Marine buddy at an assisted living facility, further driving home a couple themes along the lines of how America doesn’t take care of its wounded heroes all that well, and it provides a living example of what Cage refuses to become. There’s also a scene in which Cage tells Yelchin to not delay starting a family if that’s something he’s interested in, showing that Cage regrets that his entire life has been devoted solely to the CIA. In other words, some action was cut out, and some character development was added.

Overall, Dark works more as an interesting “what could have been” rather than a proper director’s cut. If Schrader had been given access to make his real cut, I think it would be a much more interesting film. I suppose I actually do consider them different films, in the end. I don’t plan on watching either version ever again, but if I did, it would depend on my mood. If I wanted a more straightforward experience that I could simply enjoy, I’d go with Dying of the Light. If I wanted a more immersive experience, I’d go with Dark. I do think Dark comes across more like a Schrader film, and Dying is more of a Cage film. So pick your poison, or probably better yet, don’t watch either of them, because these two films have taken up a lot more of my time than they deserve. Oh well…

I have no way on knowing what to believe, but if you check out the comments on that Indiewire article, plenty of people chime in blaming Schrader for any issues with the original cut. One person even claims to be the original editor of the film. I’m inclined to believe him because who would claim to be the editor of Dying of the Light? I just felt the need to point out that there are some people who don’t think any injustice occurred to Schrader regarding this film. Despite this, I still find the exercise of his different version interesting and worth watching.

One last thing to keep in mind: this wasn’t a Justice League situation. It’s not as if Schrader left the project and someone else finished filming. He filmed everything, so it’s not as if a new cut is going to be all that different. I do think he made a bigger deal out of things when he realized the movie was just decent, at best. Then he wasn’t given the opportunity to church it up with color changes and editing, and he made it seem like his vision wasn’t being honored. Maybe not, but I think most of his vision is there in the studio cut, and he went extreme with Dark to try to prove that his original vision was a different movie entirely. "You will be subject to overreactions, or inappropriate reactions, blank spells."

The scene after that, he's getting drunk at a Ruby Tuesdays, which he calls "Diamond Tuesdays." For the record, it’s Ruby Tuesday, singular.

I fucking love this movie no matter what happens for the next 70 minutes of it.

Anton Yelchin is all in on delivering spy-talk at a near whisper.

"This goes back to when I found you at Ruby Tuesdays, doesn't it?" Pretty sure no one has ever said that before, in film or life in general.

"I'm in Romania. Are you out of your fucking mind?! This whole country is a smoking section!"

"Isn't it strange when you can't even trust your own fingers?"

This movie goes from 0 to 11 in the last five minutes, culminating with Nic Cage's index finger knuckle-deep in someone's eye socket.

Well, that was exhausting. I think the next Schrader film I’ll take a look at is his prequel to The Exorcist. I’m sure that film went smoothly…