Just a few DVD releases to review before I gear up for my Watchmen review tomorrow night. By the way, if you are interested in Watchmen and want to read an article I wrote about it, go to http://www.perrycountynews.com/ and check out the Opinion section. Or just buy a paper if you're in the area.

Choke - Directed by Clark Gregg, starring Sam Rockwell, Anjelica Huston, Kelly Macdonald, and Brad William Henke. Rated R
Choke is about Victor (Rockwell), a "historical re-enactor" at a Colonial theme park, and his problems with his mother and his sex addiction based on the novel by Chuck Palahniuk (Fight Club). If you know Palahniuk's work, then you know that this is going to be a strange film. Victor goes to restaurants and starts choking on food, getting a (hopefully) rich person to save his life...then start sending him money because they feel like they are responsible for his well-being. That works well in the book, but I thought it wasn't focused on enough in the film. The film 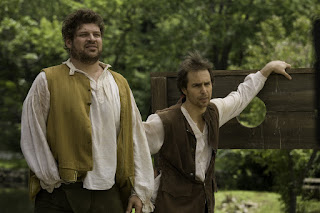 dwells on the sex addiction aspect, which is equally funny and strange, but it felt like that was the focus because the filmmakers hoped it would lead to a buzz or some controversy or something, but it didn't. It just seemed like their was no heart in any of this film. I don't mean that in a moral way, but in a filmmaking way.
The acting is fine throughout. Rockwell turns in yet another good performance (when will this guy get some wide recognition?) and Henke is great as his co-worker/best friend Denny. THey work together well and I found myself hoping they would be in more scenes, but that would get in the way of all the sex scenes, wouldn't it? Huston is okay as Victor's senile mother and Macdonald does a decent job as a doctor, but they really didn't have much to do in this.
This film suffered from a bad translation from the novel. That's all there is to it. It was not nearly as dark as the book and it lacked focus. If you haven't read the book, then you might enjoy it, but I'm a Palahniuk fan and I was extremely disappointed in this. Even with a bad translation, there should have been a slew of great lines and interesting situations, but it just isn't there. By the time the movie gets into the whole second coming of Christ plotline, it had already ran out of steam and I no longer cared about any of the characters. It did make me want to read the book again, though, so I'll be entertained once I get into that.

Redbelt - Written and directed by David Mamet, starring Chiwetel Ejiofor, Tim Allen, Ricky Jay, Alice Braga, and Emily Mortimer. Rated R
Redbelt is hard to label. At its heart, it's about jujitsu and mixed martial arts (MMA). But that is just used to get into a story about honor, betrayal, scandal, alcoholism, Hollywood, crime, suicide, money, and a magic trick or two (it does have Ricky Jay in it). This may make it seem like Redbelt is a mess of a film, but Mamet's writing (which is what he's known for, there's little visual style to this film) handles it all well without letting it become too complicated. The story starts with Mike Terry (Ejiofor), owner of a jujitsu gym, who gets into a money problems. But that seems like it's going to change when Mike helps out movie star Chet Frank (Allen, in an all too brief serious role) in a fight. Chet takes a liking to Mike and wants him to help out with his 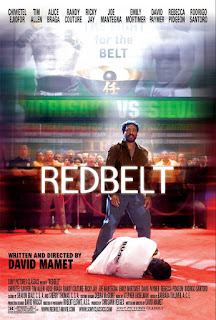 new movie. Just when it looks like the film is going to turn into a behind the scenes look at Hollywood, though, it changes gears and gets into a crime/loan shark situation. All of this leads to a MMA tournament.
But Mike doesn't believe in fighting in competitions. Which brings me to Ejiofor's performance. With a lesser actor, you might end up hating Mike, what with all his sage-like advice and pretentiousness. He comes off as kind of a jerk in the beginning. Ejiofor has a presence that keeps you on his side, though. Even when he plays a villain (Serenity), I always seem to understand his side of the argument. So when he gets to play the (for lack of a better word) hero, it's that much easier to get on his side. And that is vital for this film, because when Mike has to defend what he believes in, if you don't agree with his sense of honor based on the actor's performance, then the film isn't going to work at all.
Once again, this film moves quickly plotwise so if you watch it you're going to notice a few things I didn't mention, but if you want to see a compelling film about what it takes to uphold what is right, not just in martial arts, but in life, then you won't be disappointed. You will be disappointed if you see that Randy Couture (he just plays a commentator) is in this and you expect to see a lot of fight scenes. There just isn't much fighting in this film, though the few fight scenes are pretty good. It's like a serious writer/director decided to make a Jean Claude Van Damme movie and he realized that the fighting isn't as important as the reasons behind the fighting, that's what makes this film great. 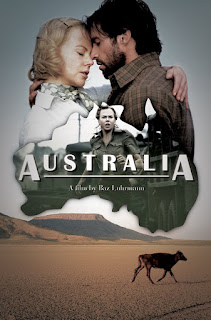 Australia has been called a beautiful mess by some critics and a trainwreck by others. They complained about the narrative structure of the film, but it all worked for me. It starts off with Sarah Ashley (Kidman) tavelling to her husband's cattle ranch in Australia. She shows up to find her husband murdered and a shady cattle baron and his trusted second in command (Wenham) trying to buy her land. She is convinced that she should take over the cattle ranch herself and drove the cattle to be sold for the army during WWII. She enlists the help of the Drover (Jackman), who doesn't like her at first, but guess what happens there. On top of that, she becomes protective Nullah, a boy of mixed Aboriginal and white descent. That is the subplot of the film. Children like Nullah were known as the Stolen Generations. The film explains what that is near the beginning, so I won't go any further into that. Just know that that is what makes for some of the suspenseful moments of the film.
So the drove is on and this is where the so-called narrative issues start. The drove plot is resolved about halfway through and the film continues with the war and the treatment of the children as the focus. Some claimed that it made this feel like two films. I liked it because it added variety to the film. I didn't want to see nearly three hours of cattle droving, that would be pretty boring. Also, this lets Luhrmann create many different visuals for the film. You have the beautiful Outback scenes on the drove and the interesting camera angles and movement, then you have an impressive bombing sequence, and the rain scene after the ball. It kept the movie interesting and kept things moving. Add a bit of goofiness to balance out the melodrama and you get a great film that is epic in length and scale alike. It may not be very original; in fact, it's downright predictable, but it's fun.
The acting is pretty good as well. Kidman and Jackman have good chemistry, but Jackman shows her up in this. You get a sense that he's having fun in this movie, with his exaggerated accent and the slightly comical fight scenes. The child actor who played Nullah is great, which is extremely important since child actor's usually take a lot of criticism. Nullah is never annoying and his narration adds a bit of humor and heart to the film. David Wenham, as the villain, appears to be enjoying himself as well. He gets to ham it up in a few scenes and while you hate him, you also enjoy the scenes he is in.
Australia came out on DVD Tuesday with only a couple of forgettable deleted scenes for a special feature. I would've liked a making-of doc or something, but the film is enough for me. If you're into westerns, war movies, romance, melodrama, comedy, amazing visuals, culture, and a bit of history then you'll love it. That list of genres might sound like a mess to some, but it sounds like entertainment to me.

Check back late Friday night (I'm watching Watchmen on IMAX and that's an hour's drive, so I won't be at a computer until later) for my Watchmen review.
Posted by Eric Harris at 12:17 PM