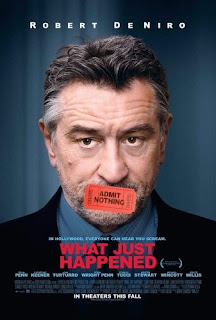 What Just Happened is a behind the scenes look at what it's like to be a producer in Hollywood. It's based on a book by real-life producer Art Linson (who also wrote the screenplay). With De Niro as the producer and Bruce Willis playing himself, I expected this movie to be hilarious, but it is mediocre on nearly every level. First of all, the book used true stories and included the names of actual actors involved in them. Even though the stories are still the same, I wanted to know who these stories were based on. Especially the British director (Michael Wincott, who steals every scene he's in) subplot about changes that are forced on him. The changes involve a scene in which a dog is shot in the head onscreen, which I found hilarious because I've comented a hundred times about the fact that a villain can kill countless humans and no one bats an eye, but hurt a dog and you are evil incarnate. So I enjoyed that aspect and Bruce Willis appeared to be having fun in his freak out scenes (he plays himself and he refuses to shave his beard for a role).
But that's where the fun ends for me. The sped up car scenes were annoying. I didn't care about De Niro's most recent divorced wife, much less the older one. I had no feelings toward his character whatsoever, really. I didn't want his film to fall apart, but I didn't want it to succeed, either. If this movie's goal was to show that no one cares about anything in Hollywood, then it succeeded. And that may very well have been the goal, but when it creates an indifference in me, the viewer, then I'd rather not watch it. That's really it. I expected to laugh a lot, but I was completely indifferent to the whole thing. I assume actual Hollywood people like it, though, so about 0.005% of the audience was pleased. 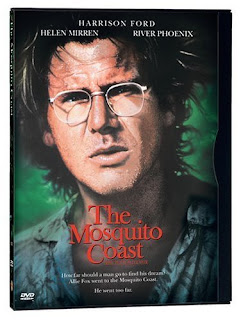 I know this came out in 1986, but I want to throw in an older movie now and then if impresses me. The Mosquito Coast is about a troubled genius (Ford) who decides to uproot his family and move to a Central American jungle devoid of civilization and build an ice factory. When I read the synopsis I was instantly interested. Something about people going deep into the jungle where only a boat can reach always seem to appeal to me (my favorite films include Apocalypse Now, Aguirre, and Fitzcarraldo). I guess I've skipped this for so long because the poster for it is ridiculously boring. Sure, Ford has a troubled look on his face, but that's all it is, and doesn't he look a lot like Kurt Russell there?
Early on this movie had my interest. Hearing Ford rant about the problems with the world and how a war is about to happen is pretty entertaining. He goes off with such ease so I instantly bought into his character. Hell, a lot of the stuff he says makes sense, now more than ever. When he takes his family to the jungle and starts to build his own mini-civilization I was still with him. I even found it believable that his family would go along with no complaints because it is established early on that he is eccentric and moving to the jungle might not seem like that crazy of an idea to all of them. But it's not all good times and eccentricities. Eventually, you start to see that Ford might be losing it. He treats his children with extreme harshness at times (mentally, not physically). And while his wife (Mirren) is adamantly by his side, his two sons start to see the problems. Especially River Phoenix, who also provides narration. Phoenix stands up well against Ford and the two truly seem to have a familial connection onscreen.
Weir doesn't do anything special in this film, but he does have a few nice shots of nature and river travel, which leads me to believe that he was heavily influenced by Werner Herzog (Aguirre and Fitzcarraldo). I half expected Ford's family to come across Klaus Kinski hauling a steamboat up the side of a mountain at one point. The world of Fitzcarraldo and The Mosquito Coast is not too far apart. And if you haven't seen either of the Herzog films mentioned, please check them out, you won't be sorry.
There are tons of thought provoking questions to this film. Is civilization becoming too material? Where does God fit into all this? (That question is handled with a kind of bookended plot involving a missionary priest.) What do humans really need to survive? There are more, but the point is that this film makes you ask yourself how you would handle life in Ford's new civilization. I wouldn't last nearly as long as the characters in this film.

Watchmen - Second viewing
Just a few things here. I wanted to check out Watchmen on a regular screen the second time to compare, but I ended up in IMAX again, so I've got nothing on that. I will say that I enjoyed this film just as much the second time as I did the first. And that was the main thing I wanted to find out: does this film stand up to a second viewing? For me, it absolutely did and I want to watch it at least one more time before the theatrical run is done especially since the screenwriter (David Hayter) has now put out a call to all Watchmen fans to watch it again to boost the box office take because he thinks, and I agree, that if this movie doesn't make more money then no studio will allow another one like it to be made again.

Milk - DVD
I also watched Milk again and while I disagree with the Academy on giving Penn the Oscar over Rourke, I still think this is one of Penn's best performances. And I mentioned something about the weird shots of Milk and Dan White talking (where they are in the bottom half of the screen and a large amount of the screen is taken up by the ceiling and walls) and I realized what was going on this time. When they first talk, they are small on the screen, the next time they are medium, and when it's getting close to the assassination their heads fill the screen. This visual clue to the conflict brewing between them was really cool, I thought. Also, the DVD has a few deleted scenes and some featurettes, but just watch the old documentary if you want a good story about the real people from the movie.

Next - Synedoche, New York, and Happy-Go-Lucky.
Posted by Eric Harris at 1:10 PM