Note: I have not read the Twilight books and do not plan to. I am reviewing this movie as a movie, not as an adaptation.
Twilight - Directed by Catherine Hardwicke, starring Robert Pattinson, Kristin Stewart, and Billy Burke - Rated PG-13
For those that know me, you may have heard me claim that I would never watch this movie. Well, as with many similar statements I make regarding certain popular movies, I went back on my word. But this is a vampire movie and I tend to watch every vampire movie that is released. My oath to never read or watch Harry Potter still stands, however. 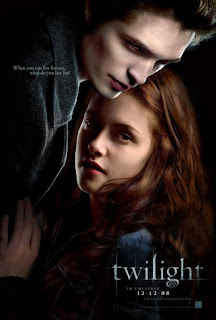 So I had a bit of a preconception coming into this movie in that I thought the books were tween garbage and a movie studio was cashing in on a craze that will be all but forgotten in less than ten years. After watching Twilight, I think I'm mostly right. The film, about vampires in a high school and the love story that develops between a human, Bella (Stewart), and a vampire, Edward Cullen (Pattinson), appears cheaply made, right down to the pale makeup. I had read and been told that sometimes the makeup is a bit messed up and I did notice that sometimes the neck didn't exactly match the face of a character, and it all looked pretty fake in general. The action isn't handled very well, either. When a vampire does something supernatural, it gets kind of blurry and the speed of the film is slowed down and sped up. It just doesn't look good. This film should have at least had some gret visuals of vampires engaging in fights and flying and whatnot, but it all came out wrong. The location looks great, though. This film could almost double as a tourism ad for the Pacific Northwest. But there was potential to create a real style for this film (and series) and it was missed, probably due to the fact that this film was rushed to come out at the height of the Twilight craze. 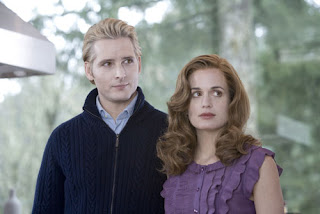 I don't really have much to say about the acting because it didn't stick out to me in any way. Everyone was just okay. Though I must say that Peter Facinelli looks plain stupid with blond hair. I would say more about him, and the rest of the Cullen family, but they are not given any character development. It's basically like this film was just meant to show the lineup of returning characters for the sequel. Here's Cullen girl, she hates Bella; here's another Cullen girl, she likes Bella; and the rest of the Cullens, who don't seem to care one way or another about anything except walking around in slow motion with brooding looks on their faces.
The look of the vampires are down (look as in facial gestures) but the lore is a bit much for me. These "vampires" can walk in daylight. Sure, it's cloudy all the time, but it's still daylight! And when they get hit with direct sun? They just shine like they're covered in diamonds. That is not a vampire. If they would call themselves something else, I would be fine with it. They do drink blood and have different powers, but the sunlight issue bothered me.
What can I say, though? I actually want to know what happens next. It's the vampire lover in me, I guess. So I will will watch the next Twilight movie (on DVD), if only to see if they give more information on the characters. I'm a sucker for the history of vampires. I want to know about the Cullens' origin and this film gave a very short explanation for it. So this film, to me, a non-reader, is just sequel bait, but it did slightly work on me.

Punisher: War Zone - Directed by Lexi Alexander, starring Ray Stevenson, Dash Mihok, and Dominic West - Rated R...hardcore R
First off, I really enjoyed the Punisher film with Thomas Jane from a few years ago. I've never read the comic book, so I don't know if Jane made a faithful Frank Castle, but I liked him as the character and I thought that film worked well. The movie studios, and critics, and many fans as well, disagreed and they decided to release this re-boot of the series. (This is the third time the Punisher series has been attempted, by the way.)
Punisher: War Zone was meant to amp up the action compared to the Thomas Jane film. I thought the previous film had plenty of action, but whatever. So this time we get a bloodbath in the first five minutes. In the first scene, Frank Castle, aka The Punisher, cuts off an old 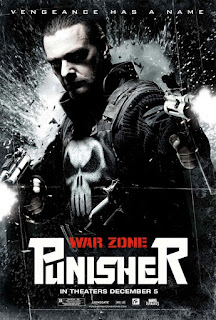 mobster's head, breaks an old lady's neck, shoots a dozen guys in the face, and stabs a few guys in the top of the head. That might turn some people away, but it drew me into the movie. I'm a big fan of violence used for ridiculous/comedic effect (hence my love of zombie movies) and this movie has that every five minutes.
There's a story, but who cares? You get Dominic West who gets to ham it up as a Jersey mobster (his accent is very over the top) and then gets to go overboard when he's transformed into the maniacal Jigsaw. Stevenson, as Castle, doesn't really say anything. He just walks around with an angry look on his face, killing everything in sight. This guy punches through a guy's head. I know I just went back to the violence in the film, but that's all this movie is and if you go in looking for something more, then you'll be disappointed. For instance, the lengthy origin plot of the previous film is abandoned for a short flashback sequence. Who cares why Castle is doing this? As long as he keeps killing in the most violent way possible, it doesn't matter what his reasons are.
Punisher is worth a watch if you want some crazy violent fun, but there's not much else there. And I did have an issue with the use of CG blood, which is just a pet peeve of mine. It can't be that expensive to mix up some corn syrup and red dye, and the CG blood looks stupid. 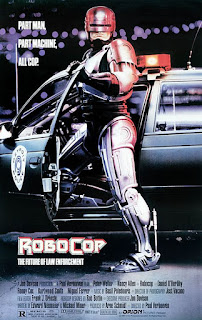 I don't want to get too in depth with this movie. I just want to point out that this film holds up very well and, in the spirit of Punisher: War Zone, deserves a viewing just for the insane violence alone. Verhoeven was the king of the 80's action/sci-fi movie and he's at the top of his game in this one. The stop motion animation is hard to watch in a few scenes, but this is a completely enjoyable film. Weller does a good job as a robot (not sure if that's a compliment or not), Ferrer is perfect as the weasly corporate guy, and Smith is phenomenal as the evil drug lord. It's just good 80's fun. 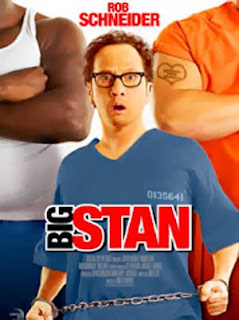 I thought about skipping this, but I thought it deserved a mention. This is the directorial debut of Rob Schneider, and as frightening as that sounds, it has its moments. The story is about Stan (Schneider) who is sent to prison for fraud, but gets six months to prepare. It's very unoriginal and there are far too many montages, but the weird humor that is always present in a Rob Schneider film is there and it makes this worth a watch. It's not hilarious or anything, but if you're a fan of prison rape humor, you'll be rolling on the floor. That is another unoriginal aspect of this movie. The whole fear of rape thing has been done in Let's Go to Prison, Half-Baked, Naked Gun 33 1/3, etc. So the jokes grow stale very quickly, but the presence of Carradine (in a real stretch as a martial arts master) and M. Emmet Walsh keep things fresh. Don't buy it, but if it comes on HBO, check it out.

Next: The Fall, Into the Electric Mist, and Death Race.
Posted by Eric Harris at 8:21 PM