Note: I did watch Knowing this weekend, but I reviewed it for the Perry County News and I want to keep that separate from this so if you're interested in my views on Knowing, check out this Thursday's edition of the Perry County News. (It will also be available under the Opinion section at http://www.perrycountynews.com/.) 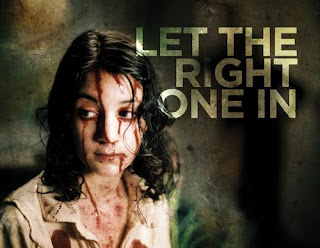 Call this Twilight for adults, or don't, since I've read a few message board entries complaining about the comparison. Like it or not, the best way to describe this movie is in comparison to Twilight. It's about a young Swedish boy who is bullied at school. He dreams of a violent revenge on his mean classmates and a new neighbor, who happens to be a teen vampire, befriends him. I've never read any of the Twilight books and I have no plan to watch the hit movie, so I'm not sure if there's any similarities to this past the fact that it involves a young person as a vampire. It's close enough for me to quickly explain what this movie is like, though.
That said, this is not family friendly stuff. There is a decent amount of blood spilled (and drained) and there are a few gory sequences. It's not gratuitous at all, though. This is not a film that revels in blood, but when you deal with vampires, you need to have it. That doesn't mean it can't be handled well, though. For instance, there is an amazing and brutal fall in this movie. Remember in Titanic, when that guy falls and hits the propeller on the way down? This tops that. I had to scan back a couple times to see if I could spot a CG effect...I couldn't. And the make up effects for just one deformed character put the CG of Two Face in The Dark Knight to shame. The deformed guy in this film truly looks miserable and in pain; Two Face looked okay I guess, but I was very aware of the CG.
This movie is not all about the shock of violence and gore, though. There's actually very little of it, but I wanted to point out how well it was done first. But I don't want to get too deep into the story, though because, aside from the inclusion of a vampire, it isn't very original. This is very much your basic bully/revenge story. Of course, the vampire aspect makes it much more interesting, but it's still nothing to go on about. Also, anyone hoping for a lot of vampire lore/origin stuff will be disappointed. There are a few things, like the title itself referencing the idea that a vampire must be invited into a home (it's also from a Morrisey song), but it doesn't delve too deeply into it. This really shouldn't be called a vampire movie at all. It's a movie with a vampire in it. It's certainly worth a watch, though I don't think it was one of the best films from lat year (as some critics do). If for no other reason, you should watch it so you can claim the original is better when the American remake comes out in January. That is not a joke, it is in development with the new title: Let Me In. Hundred bucks says the gore and violence is tripled in the new version.
One more thing: The DVD offers the original Swedish audio track or an English dub. I thought the dub was awful, but if you just hate subtitles, it should get the job done for you.

Happy-Go-Lucky - Written and directed by Mike Leigh, starring Sally Hawkins and Eddie Marsan - Rated R
I was kind of dreading watching this one. Just 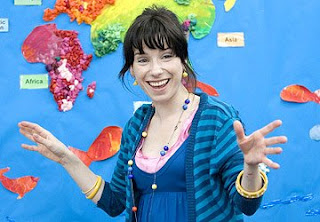 look at the picture of Sally Hawkins in character. She looks annoying enough, just wait until she starts with her constant unfunny jokes. So I didn't like her from the start and that's the main issue for this movie because the plot is really just about her boring little life. She teaches kindergarten, drinks with her friends, and puts on a smile no matter what. Then the big plot point develops: she decides to take driving lessons. So this is a character film. That's fine, but I don't like the character. In fact, I spent most of the movie wanting people to yell at her and tell her to shut up, just please shut up! But she doesn't shut up. She can't. Even when Eddie Marsan, as the driving instructor, freaks out on her, she just takes it all in stride and keeps on with her constant barrage of annoying jokes. I could go on, but I won't. This is a well made movie and all; I just hated the main character, which means I hated the movie.

God's Little Acre - Directed by Anthony Mann, starring Robert Ryan, Tina Louise, and Michael Landon - Unrated
I was referred to this 1958 movie recently so I decided to go ahead and review it. I really don't have much to say, though, because I always find it hard to faithfully judge an older film. I'll do what I can, though. 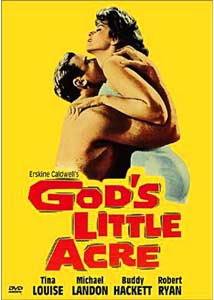 God's Little Acre is about a family in the deep South. The father believes that there is gold buried on his land and he makes his sons help him dig up most of the property looking for it rather than use the land for farming and actual profit. While he searches for the gold, his family starts to break down around him. His daughter-in-law (Tina Louise) still loves an old boyfriend and this causes some problems; his daughter is a bit wild (between Louise's low cut tops and a bathtub scene with the daughter, this is a pretty racy old film, hence the unrated version on DVD), his oldest son wants nothing to do with him and seemingly foolish search for gold, and his son-in-law (the old boyfriend of Louise) is a drunken, depressed failure. His subplot adds a bit of Communism to the mix as he wants to be a hero to a group of striking millworkers by restoring their jobs. With Communism all but dead now it isn't that big of a deal, but I'm sure it got some attention during it's original release.
The film is enjoyable enough in it's 1950's goofiness. The father gets excited so quickly and becomes so cartoonish that you have to like him, but then things get deadly serious for a bit and you start to realize that this guy is the reason the family is so messed up, no matter how many sentimental speeches he gives. I ended up disliking the character the father character because near the end he talks about how love and family and God are all that really matter, yet he jumps up and down and prattles on like a maniac when he searches for gold in the backyard. But money doesn't matter, it's all about family...now go get me a glass of ice water while I dig some more! He's a complete hypocrite and it angered me that none of his sons stood up to him and let him know about it.
Apart from his character, it's a nice look into what films used to be like: sweeping musical scores, overacting, melodrama, and the appearance of a message. Though I'm not sure what to make out of the subplot concerning the albino (Landon) and the mystical powers for finding gold that he possesses. That along with the sexuality/adultery and the hint of Communist made this film controversial and makes it still interesting today.

Next: Nothing in theaters right now interests me, so I'll just be reviewing more DVD releases.
Posted by Eric Harris at 11:52 PM