I'm going to skip over what the film is about since that would take up too much space and I already wrote something like that and it can be found in the Opinion section on http://www.perrycountynews.com/. 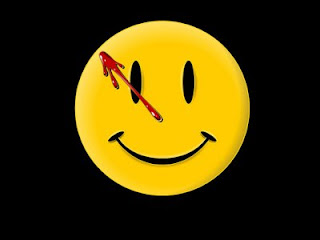 Watchmen is an entertaining, epic, extremely cool movie and fans of the book will love it and newbies will at least be entertained by it. Having said that, this is a difficult movie to review because there are such high expectations for it. It would be so much easier if I hadn't read the book, but I did. One problem was making myself accept this as its own film, but I couldn't help but notice changes here and there. So I'll start with the faithfulness of the adaptation.


Zack Snyder and the writers (David Hayter and Alex Tse) stuck very closely too the source material with this one and only the most hardcore fan of the book would be angry with the changes made. The most important thing is that the Watchmen world is intact. Does it seem like a completely different America? No, but it's different enough that it bec 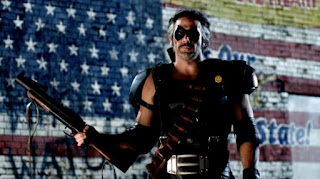 omes a kind of character in the film. It's just impossible to translate the world completely from the book. The ending is different and quite a few things were cut out but, dare I say it, many of the changes improved on the story. That's not necessarily a knock against Alan Moore. It's more about the fact that a book and a movie are two very different mediums and certain things don't work in each. For instance, a long fight sequence in a graphic novel is not going to be suspenseful and it certainly isn't going to have a wow factor. The fights in Watchmen the movie are amazing and there is very little in the book to go on for the fights. Snyder made sure that he expanded and added plenty of fighting into this not only to make the film more entertaining, but also because the viewer needs something to go along with the long scenes of character development. But the book has a more intricate story that can't be displayed on film unless you want a six hour movie that has very little action. So I liked the changes because it made the movie its own piece of work, rather than just being a moving replica of the book. Things move faster and the stuff that was left out wasn't really vital to the story anyway. Plus, if you love the source material that much, just read the book again.

This brings me to the style of this film. I've never seen so many great pull back shots that reveal such massive and amazing visuals. This is all made that much better on IMAX. The giant screen makes it so much more impressive than it would be in a standard theater and the sound is phenomenal as well. It's just cool to see the opening panels of the book (closeup on smiley face button that pulls back to the apartment the Comedian was thrown out of). It's an experience that warrants multiple viewings. Snyder also goes from backstory to backstory almost seamlessly and it keeps the movie interesting. It wouldn't be as good if Rorschach was narrating the entire film. I liked hearing Dr. Manhattan take over the narration for awhile. This movie is taking some flak for the pacing, but I loved it. It goes from an impressive and brutal fight sequence to a meditative backstory and it feels natural. One review I read complained about all of the origin/backstories but I wanted more.

Of course those stories wouldn't be interesting if the actors didn't do their jobs. Jackie Earle Haley was the perfect choice for Rorschach. His voice is perfect and he looks strange enough to pull off the scenes without his mask. He's offputting as a character, but you get on his side pretty quickly in the film. Billy Crudup as Dr. Manhattan is great as well. It's hard to get past the visual effects of his character (which also look great on a big screen), but his voice has a sim

plicity to it that is perfect for the character. It is devoid of emotion, which it should be, but there's a hint of humanity in it that makes you identify enough with him to not be put off by his indifference. Jeffrey Dean Morgan really brought the Comedian to life. He has some of the best lines in the film ("What happened to the American dream? It happened. You're lookin' at it.") and even though he's an awful man, you want to laugh with him. My only problem is that he has minimal screentime, but that's in keeping with the book. Malin Ackerman, Matthew Goode, and Patrick Wilson are all fine, with Wilson standing out a bit. I just think that their characters are the least interesting so the actors had the least to do here. But they still have their moments and they don't disappoint by any means.

I normally wouldn't comment much on the soundtrack, but it's been catching alot of heat from critics as well for being uninspired. Ride of the Valkries plays during a Vietnam sequence, Sound of Silence plays during a funeral, All Along the Watchtower is used...sure it's been done before, but the songs fit. I'd rather hear a known song than some strange one that was picked just because it was unknown. If it works, use it, and these songs work. Plus, the music during Dr. Manhattan's origin story is very effective.

Is this a perfect movie? No. Some changes and omissions hurt. I thought Rorschach's mask should have been explained and Richard Nixon, as a character, should've been toned down.

My problem with Nixon is that they used the most ridiculous fake nose ever put on film. All that thing needed was some red paint and it would've doubled as a clown nose. I don't understand how they let that get on screen. I cringed each time I saw it. But the problems are easily overshadowed by the sheer volume of this film. The fighting is top notch and plentiful, the visual effects are impressive and rarely out of place (Dr. Manhattan sticks out a bit awkwardly at times), the acting is impressive at times and never below average, the film in general looks beautiful at all times, and it follows the book so closely at times that you notice shots that match up exactly with some of the comic frames. 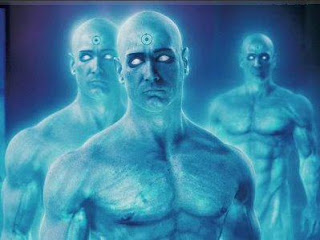 fanboys. I can't imagine how the story works for someone like that, though. I knew everything going in, so there were no surprises and it always made sense to me. But I know about every aspect of the story the book and I can't just forget that information so I can analyze the story. That would require quite a few more viewings. That factor aside, I was extremely entertained by this film and I found myself noticing little nods to the book here and there in the background. The detail of this film will make this film interesting to me for many, many more viewings and that's always a major factor in a film for me. So check it out if you want to see a well made film that is different from all the rest of the comic book movies out there. Watch it on IMAX if you can, because that screen does justice to the painstaking detail and style that was put into this great movie.

Also, the opening credit sequence was easily one of the coolest I've ever seen and it developed quite a bit of history for the alternate 1985 U.S.A. as well. And after reading some of the reactions to the film (i.e. people bashing it on IMDB) I realized that there were a few more problems with the film that I failed to write about, but there is almost certainly going to be a director's cut of this movie and I'll wait for that before I overanalyze this version. Let me make this clear, though: I had forgotten a few of the minor issues with plot and character (can't really get specific about it because it involves spoilers) because the film was so impressive on multiple levels. I'll probably watch it in the theaters one more time, then I'll write my reaction upon a second viewing.


Next week: Something on DVD, maybe What Just Happened? and a couple others.
Posted by Eric Harris at 12:13 AM