A Long Look Back at Kubrick's Last Classic

*I figured it was high time for another article, so I decided to write it about Eyes Wide Shut, which is a movie I absolutely love. There will be massive SPOILERS throughout the article. 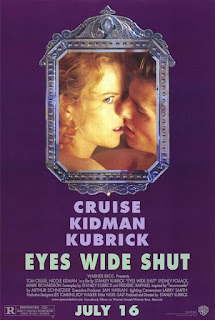 Eyes Wide Shut was considered a bit of a disappointment when it was released. Even though it is now "certified fresh" on Rotten Tomatoes, though it is only 78%, which I find a bit low for a Stanley Kubrick film. So it may not seem like this film needs a second look when you just look at the critical response. But I have read and heard people dismiss this film over and over again. Maybe it's the whole Cruise and Kidman issue that some people just couldn't ignore, I don't know. Regardless, it's never mentioned in the same breath as 2001: A Space Odyssey, A Clockwork Orange, or The Shining (I know there are more examples, but I don't want to make a long list). I am one of the few who mention this as one of my favorites. Here's why.

I want to get into the whole color aspect of the film, but I want to mention how angry this film made me the first time I watched it. The first time I watched this I ended up annoyed by the fact that the plot didn't focus on the identities of all the supposedly rich and powerful masked people at the orgy. This annoyance was pushed to the limit when Sydney Pollack's character states, "if I told you their names, I'm not going to tell you their names, but if I did, I don't think you'd sleep so well." Not only does a character blatantly tell the audience that they will never know who those people were, but he also adds to the mystery with that whole no sleeping so well bit. Man oh man that made me so angry about ten years ago. Something about the movie intrigued me, though, and that something, along with a maturing taste in film, brought me back to this movie and to my senses.

I suppose the use of color had a little effect on me the first time I watched. I always thought the film look amazing and that is largely due to the glowing windows in many scenes and the richness of color throughout. It wasn't until I stumbled upon a theory in the IMDb message boards (and a intro class on film in college) that I realized what was going on with the colors. This movie features Bill Harford (Tom Cruise) getting into some pretty shady situations. You never really 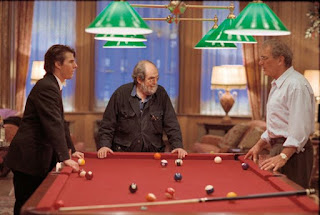 know when he's safe or when he's in danger until the scene is over. The color scheme of this film echoes that. The theory is that blue represents safety, red represents danger, and green represents a gray zone where even Kubrick doesn't want to give you clues about what might happen. The prime example of this is when Cruise has that discussion with Pollack (where Pollack utters that infuriating line). Pollack is shooting pool on a red table, with green lights above it, while blue light glows from the windows. You could turn the sound off and just look at the colors and you would find out just as much as you would through the dialogue. Can Bill (and we, the audience) believe anything Pollack says. The colors tell us it's all up in the air here. Pollack was once a friendly character(blue), but he had that dirty business with the OD girl at the Christmas party(green), and he's a member of that possibly dangerous orgy group(red). Use that color scheme throughout the entire film and I promise you'll see this movie in a completely new way. In fact, pay attention to the use of color in every film, as the representations of each color typically stay the same from film to film.

The color actually explains a bit of the plot of the film, or at least why the movie is set when it is. It is so much easier to use color blatantly when the movie takes place during Christmas. The holiday aspect also brings to mind the importance of family, which adds to the plot of what is at stake during Bill's wild night out. The holiday even allows the use of background decorations to become meaningful. For example, when Bill is walking away from the creepy stalker in the city and takes refuge in the coffee shop, you can see a decoration above a doorway that is exactly like a decoration in Pollack's house; possibly a sign that the coffee shop is just as safe as Pollack's (at this point Pollack is still quite friendly). While I'm on the subject of background, you should keep your eyes open (no pun intended) throughout the film for stuff around people's apartments (books, paintings, etc.) as that stuff can be quite telling as well.

Now for some straightforward reasons why Eyes Wide Shut is a classic. Tom Cruise gives a great performance, especially when he isn't speaking. Not to say that his delivery of dialogue is sub par or anything, it's just that he is much more impressive when thinking about his wife possibly cheating on him. And I think both Kidman and Cruise were award worthy for their stoned/argument scene alone. Cruise's reactions in that scene are great.

The music is amazing as well. I actually found it quite annoying at first, but I realized that that is kind of the point. It's unnerving and haunting and if the single piano key being struck slowly over and over again gets on your nerves, then the music has done it's job. This is a film about strange and dangerous situations. What better way to accent that strange scene with the Russian costume guy and his daughter/prostitute? Or that awkward encounter with the hotel clerk (Alan Cumming)? There are many questions that go unanswered in this film and the music adds to all of the uncertainty.

Now to the plot itself and what really made me look at this film again. I used to hate this movie because I was so focused on who those masked people were. I finally realized that the identity of those people does not matter and it would be a drastic mistake if this film had focused on them. They are just another element of uncertainty. For some reason, possibly it was that Pollack line, the masked people were all I cared about. Upon 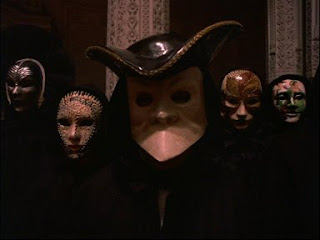 repeat viewings, I realized what was truly interesting: marriage and infidelity and the complications of both. All of the possibilities of a modern relationship in this film intrigued me. The movie could almost be seen as preaching about the importance of being faithful, which didn't bother me at all. Look at what Bill's attempts at infidelity got him into. He feared for his life many times. It wasn't just the orgy. Look at the encounter with the prostitute. Just as he's about to cheat on his wife, she calls him and brings him to his senses. It later turns out that the prostitute had HIV. (Look for prominent red in that scene, by the way.) While that assessment might be a simplification of the film, it doesn't make it any less interesting to me. A movie about an adventure in marriage and the underworld that secrets and lies can create in a relationship and a family. When you look at it that way, with the haunting music and interesting color scheme, the masked people no longer matter. So forget your initial response (if was anything like mine), forget the masked people, forget Tom Cruise and Nicole Kidman's real life problems, and remember that there is a lot going on in this film; this final classic from the brilliant Stanley Kubrick.
Posted by Eric Harris at 10:41 PM