"A Nightmare on Elm Street"

It's sad, really, Clancy Brown (aka The Kurgan) was in this movie, but I have to give it a Nolte...what a shame.

Welcome to the party, Freddy. You’re the latest horror icon to 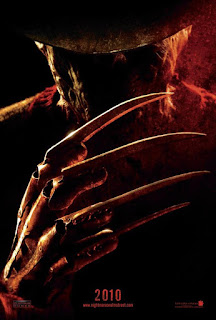 get a bland, unnecessary remake. Don’t get me wrong, I don’t think all remakes are terrible or pointless, but these horror remakes have to stop. These stories should either be continued or left dead. Don’t just start them over; that’s boring. Give me a sequel to Freddy Vs Jason before you just churn out some reboot. At least that film was aware of itself and fun. Unfortunately, I don’t see this stopping anytime soon. But I digress; let’s take a look at this crappy movie.
A Nightmare on Elm Street offers nothing new or interesting to the series. We’re treated to the origin story of Freddy again. Just in case you have never seen a Freddy movie, here’s the skinny: Freddy Krueger is a child molester (in the original he was a child murderer) who gets burned alive by a group of angry parents. He continues to torture their children from beyond the grave by attacking them in their dreams. Sounds like a weak revenge plan, but here’s the catch: if Freddy kills you in a dream, you die for real. That basic story has worked for years and I’m okay with it, but I wanted to see a few more interesting ideas at work.
The only aspect of the film of note is the casting of Jackie Earle Haley as Freddy. I thought Haley did a fine job here, even though he’s just using his Rorschach voice from Watchmen, but his presence doesn’t save this film.
What could have saved the film is director Samuel Bayer. The script was going to be basic, that’s just a given. Bayer, a veteran music video director, would have to do something with the camera or the dream sequences to spice things up. Sadly, he just followed the example of the script and kept things very basic.
What’s terribly frustrating about Bayer’s failure is the fact that this film mainly takes place in people’s dreams. That is ripe territory for inventive and visually impressive filmmaking. You’re basically free to do anything when dreams are the film’s landscape. But it’s the same old settings we’re used to. You have the school and the boiler room, that’s pretty much it. Those two settings are a requirement for an Elm Street movie, I understand, but they look almost identical to the old films. If this is a “reimagining,” then these filmmakers don’t have much of an imagination.
So the locales are the same, I can forgive that if the movie makes up for it with some inventive death scenes or blood is used more like paint and less like slop to be thrown at the audience. This film is only slightly acceptable in that department as well, though. There is a scene of two where the film succeeds, but for the most part the kills are sloppy and lame. If you’re remaking something, you should have the decency to create some interesting visuals.
But is it scary? That’s the point anyway, right? If you get frightened by jump scares (you know, when the camera moves around a character and the villain suddenly appears, accompanied with a shrieking violin sound cue), then this film might get to you. If you need atmosphere and a truly frightening villain, you’ll probably just end up bored.
The villain wasn’t frightening to me because I thought the make up for Freddy’s burnt face was weak. I couldn’t help but think of Gary Oldman’s disfigured character from 2001’s Hannibal. It just didn’t strike me as original and it certainly didn’t give me the creeps.
The movie is at best adequate on nearly every level, and to top it all off, it’s strangely made and quite stupid at times. I say it’s strangely made because the director leaves the camera going for about ten seconds too long in nearly every normal scene. The movie seemed to be in slow motion at times. It’s like they realized the script wasn’t long enough, so they shot filler to get the runtime up.
Now for the stupidity. Okay, you’re being hunted in your dreams, so you have to stay awake. What do the two leads decide to do? Go to the book store and read sleep deprivation books, of course! I don’t think reading about sleeping is the best way to stay awake. Plus, these characters aren’t sleep deprived, they are flat out narcoleptic. They fall asleep at the most ridiculous times, like while they are swimming (not joking, it happens). And here’s a tip for these kids: if you want to stay awake, don’t sit down! Just keep standing, walk around or something. At one point a girl, who is aware of the situation, mind you, decides to take a relaxing bath because that would never put you to sleep. Take a shower, lady! It’s a more active experience and will probably keep you awake.
I could go on and on but I’ve already started to rant about this one. I’m just upset about what has happened to icons like Freddy. Maybe I’m wrong, though, the kids at the showing I was at seemed to like it, so maybe they’ll be in my shoes in twenty years, ranting and raving when the next “reimagining” comes out in all its mediocre glory.
Posted by Eric Harris at 4:47 PM