I'm quite the Ridley Scott fan, so I'm glad I didn't have to give this film a Commodus.


Do we really need a new movie about the legendary Robin Hood? 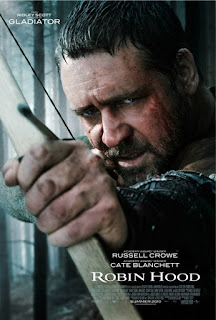 It’s been done countless times, even to the point of parody (remember Robin Hood: Men in Tights?). Well, it turns out that Ridley Scott and screenwriter Brian Helgeland didn’t want to tell the same old story again, either. The previews for the film proclaim that this film is the story behind the legend, not the legend itself. That story, as it turns out, is extremely interesting and, more importantly, entertaining.
Robin Hood takes place at the turn of the 12th century. Robin Longstride (Russell Crowe) is among the crusaders following King Richard the Lionheart (Danny Huston in an amusing, though short role) as he plunders his way through France on his way back to England. Robin is just a soldier, but fate throws him in the middle of a potential war between France and England.
This is not a movie about Robin hiding in the woods, stealing from the rich and giving to the poor. This is the story of how he became that man. We get glimpses of his sense of honor; upholding a promise he made to a dying knight, helping a village keep their grain, etc. They are just that, though, glimpses. The full focus of Robin Hood is actually the situation that created the legend.
The political landscape concerns King John and his need to collect taxes from the barons. He lets loose Sir Godfrey (Mark Strong) to basically terrorize the countryside. But Godfrey is in cahoots with the king of France and he’s using French soldiers to collect the taxes and turn the barons against the king. The tax collection is the main thing, though. No one likes paying taxes, but people turn violent when taxes are demanded yet they have no representation in the government, or in this case almost no basic rights at all. So, yeah, Robin Hood is fighting a war on taxes. When put like that, this movie might sound boring, but I assure you, there’s some action.
Ridley Scott has proven himself time and time again when it comes to battlefield action. Robin Hood is further evidence that Scott knows what he is doing. People are comparing this film, unfairly, to another Scott film, Gladiator. Those looking for action on that level are going to be disappointed. The more apt comparison would be to Kingdom of Heaven, Scott’s 2005 crusades film. In fact, you could make the argument that this film is almost a sequel to that film since Richard the Lionheart appears at the end of the film on his way to his crusade. The main difference, and my only real issue with this film, is that Robin Hood is rated PG-13. This basically means that the blood is taken away from the battles. This may seem trivial to some, but I had an issue with it because it’s Ridley Scott. The guy paints a battle with beautiful splashes of blood. Take away that ingredient, and he’s left to make battle scenes where someone gets hit with a sword and just falls over.
The action is great, but there’s not an abundance of it. I was fine with that because I enjoy history and Scott created a great historical world for this film. Others might be bored by the scenes with Marshal (William Hurt) as he discusses political issues within the country. That stuff interests me, though.
Of course, it’s easy to maintain interest when the cast is good. First off, Crowe does a fine job as Robin. He doesn’t give an iconic performance or anything, but he handles the hero role well. Cate Blanchett holds her own as Marion, the strong willed protector of the village. Mark Strong is impressive as usual as Godfrey. It’s only a matter of time before he wins an Oscar.
It’s too bad this cast won’t be coming together for round two. I usually don’t clamor for sequels. I don’t have issues with them, but it seems like a movie is more substantial if it’s a standalone story. I would like to see another Robin Hood because the characters and the world are set up so effectively. The problem here is that if Ridley Scott made that movie, then it would go against the entire point of this film. This is Robin Hood’s origin story because that is a part of the legend that gets the least attention in the other films. I wasn’t interested in seeing the same old story again, but now that I’ve seen what Crowe and Scott have done with the origin, I wouldn’t mind seeing what they could do with the rest of the legend. But Ridley Scott doesn’t make sequels (the closest he has come so far is that he has signed on for an Alien prequel), so I’ll probably never see his version of it. That’s no big deal, though, because Robin Hood stands on its own quite well.
Posted by Eric Harris at 10:06 PM