The Kurgan and Ivan Vanko might be distant relatives (although The Kurgan is a bit more awesome). 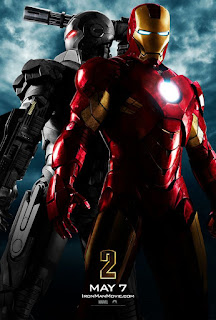 always been more of an X-Men and Batman fan, so I went to check it out with fairly low expectations. When I walked out of the theatre I had become a fan of Tony Stark. The first movie had plenty of action, wit, and fun. Most importantly, Iron Man was a film that featured a near perfect performance from Robert Downey, Jr. and it was a film that didn’t take itself too seriously. I’m happy to say that all of the above applies to Iron Man 2.
The word “busy” would also apply to Iron Man 2. As with most superhero sequels, the kitchen sink approach is taken. This can hurt some films, but director (and co-star) Jon Favreau handles the multiple plot points well. Tony Stark is dealing with a lot of issues this time around. His homemade chest reactor contains an element that is killing him, he’s being hassled by the government to turn over his Iron Man suit, the Russian son of his dad’s former business partner is trying to kill him, Nick Fury (Samuel L. Jackson) is hanging around talking about the Avengers, a weapons rival (Sam Rockwell) is making trouble, and he still has the same issues from the last film with Rhodey (Don Cheadle) and Pepper Potts (Gwyneth Paltrow). Sounds like a bit of a mess, doesn’t it?
It is actually very easy to follow, though. Things move quickly at first, with Tony constantly on the move and acting as reckless as ever. This is standard sequel stuff. The audience already knows the main characters, so no introductions are needed. What is needed is constant movement. That’s fine. I enjoy a quick paced film. But it’s nice when a movie slows down a bit, as well. The strange thing about Iron Man 2 is that it seems to be going 100 mph during the first half, then it drops down to a leisurely 30 mph, only to crank it back up by the end. I’m sure some people will claim that this film has “pacing issues,” but I actually enjoyed the speed of the film.
But who cares about pacing, right? This film is all about the characters and there are a lot of them. I won’t waste too much time talking about the returning cast, if you liked Downey, Jr. the first time, then you’ll like him again. Same goes for Paltrow. And Don Cheadle is a suitable replacement for Terrence Howard.
The newcomers really get to shine in this one. 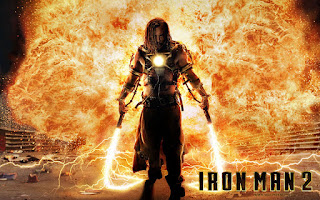 Mickey Rourke plays villain Ivan Vanko with a great understated menace, plus he looks cool. I know the whole walking away from an explosion and not looking at it has become a cliché, but I forgive the filmmakers for it because it just seems fitting for Mickey Rourke to walk towards the camera with flames erupting behind him. As for the understated menace, you can see it in every scene of dialogue with Vanko. You truly get the impression that he is capable of extreme violence at any moment
Sam Rockwell is also a great addition to the cast as weapons manufacturer Justin Hammer. His interactions with Downey, Jr. are amusing and his general showmanship throughout the movie is quite funny. Rockwell has been consistently impressive lately in films like The Assassination of Jesse James… and Moon. It’s good to see him in a high profile release like this because he deserves a larger audience.
Scarlett Johansson is another high profile addition to the cast as Tony’s suspicious new assistant. Let’s be realistic here, there’s no secret to her character. If you’ve seen any marketing, then you know that she is not just a helper; she’s actually a secret agent working with S.H.I.E.L.D. She gets an entertaining action sequence in the film but for the most part she seemed like an unnecessary addition to the cast, but it didn’t bother me all that much.
A much more interesting casting choice is John Slattery as Tony’s father, Howard, in archive footage. He basically gets to act like his character from “Mad Men.” It’s just something that fans of that show will find amusing. Another amusing choice is Garry Shandling as a senator trying to get Tony’s suit.
The abundance of characters doesn’t mean the film is lacking in action or comedy, there’s more of both this time around. Tony’s birthday party was quite funny and there’s an excellent in-joke for people aware of the other Marvel characters…I’ll give you a hint, it involves a shield. (Stick around after the credits for another crossover tease.) So expect to laugh quite a few times.
The action is even better this time around, as well. Ivan Vanko’s attack at the Monaco car race was flat out awesome and of course there are some great action scenes during the climax of the film.
When it comes to movies I feel that more, more, more usually means less quality. I’m glad to say that’s not the case with Iron Man 2. Yes, there is certainly a lot more to this film than the original, but it’s handled well and it makes for a good time at the movies. What else could you ask for?
Posted by Eric Harris at 3:40 PM