The Kurgan likes laughing at idiots.
Comedies about weirdoes, idiots, or otherwise flat out annoying characters always walk a fin 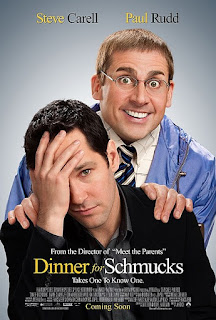 e line. That line is the difference between funny and unbearable. Dinner for Schmucks stayed on the funny side for me.
Schmucks is about a dinner party a rich executive throws in which underlings and colleagues invite the most idiotic person they can find and make fun of them, awarding the biggest idiot at the end of the night. The film is really just about the lead up to the titular dinner. This film is more about relationships. In this case, those relationships are those of Tim (Paul Rudd), Barry (Steve Carell), and Julie (Stephanie Szostak).
Tim is on his way up in the company, so that means it’s very important to bring the best idiot to dinner. Enter Barry, a happy simpleton who takes everything literally…oh and he makes “mouseterpieces”; more on those later. Barry commences to ruin Tim’s relationship with possible fiancé Julie…hilarity ensues.
This film really reminded me of Planes, Trains, & Automobiles. It’s not that there is a lot of travel in Schmucks, it’s that Carell and Rudd share the same troubled friendship as Steve Martin and John Candy. Carell just seems to intentionally mess up Rudd’s life. They play it that same as Martin and Candy did. Carell seems oblivious and even well-meaning, while Rudd becomes more and more angry. Let’s be clear, though, this comedy is nowhere near Planes. But Rudd plays the funny straight man pretty well to Carell’s zany, but redeeming idiot.
That factor is what put me on the positive side for this film. As far as laughs go, there are plenty, but they are not constant. What makes up for that are the likable characters. Rudd is a jerk at times, but I still wanted things to work out for him. Carell is weird and annoying, but I hoped for the best for him as well. This movie could have easily been mean spirited but it has a heart, and that saves it.
Some people might not share this opinion, though. Your enjoyment depends largely on your feelings toward Carell. He has a generally strange look in this film. I laughed at times just because of the faces he made. He also has a few ridiculous lines and at times just makes noises for laughs. I’m not saying all of it was funny, but I found myself laughing at him more often than not.
Carell’s “mouseterpieces” definitely make the character. Carell spends his free time (his day job is at the IRS) taking taxidermy mice and putting them in cute, and sometimes strange, scenes. The sheer oddness of it all should provide a few laughs, but the more unlikely scenes still have me laughing when I think back on them. My favorite was the “mouseterpiece” of a mouse finding his wife in bed with another mouse. A typically depressing situation made cute and funny by the use of dead mice.
That’s not where the weird ends with this film. The supporting cast is full of weirdoes. Zach Galifianakis (Hollywood’s go-to eccentric comedian since The Hangover) makes for a great quasi-villain for Carell. He is another actor who creates laughs for me from appearance alone. It helps that he is given free rein in this one, as a mind controlling idiot.
Jemaine Clement (HBO’s Flight of the Conchords) upstages the other weird characters as an egotistic artist. He may be the most ridiculous character in the film, but I found him consistently funny. But my favorite supporting character is David Walliams as the rich Swede that Rudd has to land for the company. He plays what is supposed to be a straight role with great eccentricity. His facial gestures had me laughing throughout and he’s given some great, and strange, lines such as, “That’s my wife’s favorite finger!” Walliams may not stand out for most, but if you pay close attention to him, you’ll see that his few short scenes contain some very funny moments.
That’s basically it for this film. Dinner for Schmucks isn’t a comedy classic, but it is a solid comedy in a summer that has largely been humorless. The film may not pay off much when it comes to the actual dinner (I thought the inclusion of puppet-wielding Jeff Dunham to be quite weak), but it makes up for it with strong main characters that are genuinely likable. That’s the trick to Schmucks. It’s a movie about making fun of idiots, but it doesn’t condone that. I’m glad that it doesn’t, because who wants to walk out of a comedy only to feel bad for laughing the whole time?
Posted by Eric Harris at 10:20 PM