It's not as funny as the other McKay films, but it's still funny enough for a Kurgan.

Will Ferrell and writer/director Adam McKay are responsible 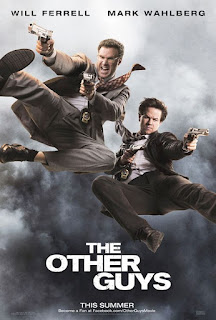 for some of my favorite comedies of the past few years: Anchorman, Talladega Nights, and Step Brothers. They also worked together on “Saturday Night Live,” where they were responsible for the hilarious “Bill Brasky” sketches. In other words, I dig their sense of humor.
Ferrell and McKay’s previous films and sketches are all absurd to the nth degree. They come off as improv exercises loosely tied together by the barest of plots. The Other Guys is different in that there is actually a plot to follow, but there’s still plenty of room for the absurd. What this amounts to is a film that is McKay’s best directed film, but the least funny of his filmography. Remember that I’m calling this movie the least funny compared to three absolutely hilarious movies, which means that The Other Guys is still one of the funniest movies of the year.
The plot of this film is what surprised me the most. I was expecting next to nothing as far as story is concerned, but this film turns out to be a condemnation of the financial world. Don’t worry, though, this is not a message film; though it did put me off a bit when the “How a Ponzi Scheme Works” presentation started playing during the credits. It just seemed a bit off, but good for them for trying to throw some education in with a goofy comedy.
The majority of the plot, thankfully, sticks with the titular “other guys”: the cops who work out of the office, usually typing up reports. Will Ferrell is Allen Gamble, who is more like an accountant than a detective. He is partnered with Mark Wahlberg as Terry Hoitz, who was relegated to a desk after accidentally shooting a high profile athlete. The characters are an unlikely pair, just as the actors seem like polar opposites. The big question for this movie is if that dynamic pays off. The answer: sort of.
Wahlberg basically plays the tough, angry man who yells at Ferrell in nearly every scene. Some of Wahlberg’s outbursts are funny (I mainly enjoyed how he thought everyone was a drug dealer/addict), but his yelling starts to sound forced after awhile. At one point, Ferrell tells Wahlberg that he is sick of all his screaming and I was with him; I wanted him to calm down and find a new way to be funny.
Ferrell, on the other hand, gets to play a slightly more realistic character this time around, while still retaining enough quirks and one-liners to stay funny. His back story was great and his general reaction to Wahlberg was amusing.
I actually liked the two other heroes of the film much more, though. I’m talking about Dwayne Johnson and Samuel L. Jackson as the supercops that are caricatures of the heroes of countless cop movies from the past. Their screen time is short but sweet. I was definitely laughing the hardest during their early scenes. I don’t want to ruin anything about the characters, but I will say that “Aim for the bushes!” is going to be one of the few lines that I quote from this film. I think I would have rather seen a full film with those two characters, actually.
Johnson and Jackson aren’t the only interesting side characters. Steve Coogan does fine as a sleazy investment banker. Michael Keaton had some funny moments as the police captain. His running gag of quoting TLC songs was weird and funny. Eva Mendes had some decent scenes as Ferrell’s wife. And Ray Stevenson added some menace as the villain.
This film may not be as quotable and ridiculous as McKay’s other efforts, but there is one element that sets this film apart. The Other Guys is a bit of a send-off/spoof of buddy cop films, except it takes itself a little more seriously than films like The Naked Gun. You have the cops with troubled pasts. There are villains that only seem to always just “try” to kill the heroes. There are even musical cues that sound like they were lifted right out of Lethal Weapon.
Some might find the film a bit uneven when considering the spoof angle. At times, the film seems borderline serious; at others there are conversations about how a tuna could kill a lion. I thought it all worked, though, in a messy “who cares?” kind of way.
The Other Guys didn’t turn out to be as hilarious as I thought it would, but I will say that this movie will probably benefit from multiple viewings. I am quite sure that I missed some jokes here and there. With McKay movies there are always a few random lines that sneak by you on the first viewing. So I may have had lulls in between my laughs this time, but when I catch this on DVD in a few months I may be laughing throughout. That is what’s great about McKay/Ferrell movies: they’re the gifts that keep on giving. So check it out right now if you get a chance, but definitely check it out at least twice on DVD.
Posted by Eric Harris at 9:57 PM

Email ThisBlogThis!Share to TwitterShare to FacebookShare to Pinterest
Labels: Mark Wahlberg, The Other Guys, Will Ferrell