It's no masterpiece, but it's still a pretty damn good action movie. 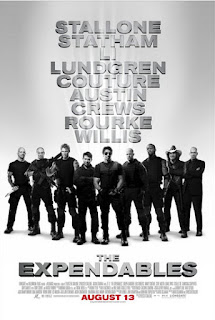 now. My friends and I have been gushing about the manliest cast ever assembled and expectations were at an all time high. Did this end up as the best action movie ever made? No, of course not, that is a ridiculous expectation. It did turn out to be a brutal callback to the heyday of action movies. It’s a flawed, but very fun movie.
This movie has been about the cast from the very beginning. It’s a who’s who of old and new action stars. Sylvester Stallone (who also writes and directs) and Jason Statham are the two leads, with the rest of the good and bad guys taking on much smaller roles. Everyone has their little moments, though, and fans of any of the actors should come away pleased.
I loved the cast, but a good cast doesn’t guarantee a good movie. The story has to be somewhat compelling. The Expendables has a story that fits into the same world as Stallone’s last Rambo film (a movie I loved, by the way). Some small underdeveloped nation is being abused by a dictator backed by a rogue CIA man. The team is asked to intervene in what looks to be a suicide mission. At first they turn it down, but eventually it becomes more about Stallone saving his soul than making money, so he takes the job. The difference between this and Rambo is that instead of one man against an army, there’s a small team of Rambo-types, and they’re all bulletproof marksmen.
The plot is serviceable in that it sets the stage for plenty of outrageous action. The final twenty minutes are flat out awesome. And let’s face it, the only reason to see this movie is the action. For the most part, it’s handled well. I thought Stallone employed the shaky-cam, quick cut method a bit too much, though. At times, it felt as if Stallone just threw the camera right in the middle of the action. I know that sounds like a compliment, but it most certainly is not. It doesn’t ruin the movie, however, and the last act makes up for it, anyway.
I don’t want to ruin any of the action set pieces, but I do have to mention some of my favorite elements from the cast. First off, Stallone and Statham work well together. It was cool to see the two generations of action stars working together. Terry Crews (President Camacho in Idiocracy) doesn’t have much screentime, but he gets the greatest moment in the film involving a fully automatic shotgun. Dolph Lundgren gets to crazy things up like he did in Universal Soldier. It was fun seeing him in an actual movie again. The rest of the cast is okay, their moments and characteristics just aren’t very interesting. But I didn’t care for Randy Couture. I have yet to see a UFC fighter who can deliver convincing dialogue in a film. The only thing missing from this cast is Jean-Claude Van Damme. For whatever reason, he turned down a role in this film. Hopefully, he comes to his senses for the sequel, which Stallone is already talking about.
The over the top action of the film is what keeps it interesting and entertaining, though. I called this a callback to older action films earlier. First, it’s a callback in the brutality of its action. Heads and other body parts are cut or blown completely off and the body count is astronomical. (I found it amusing that to save a small country; half of its population had to be decimated.) Second, the characters are not very developed. The good guys have issues, sure, but they are definitely good. The bad guy (an enjoyably sleazy Eric Roberts) is absolutely evil. Who needs complicated characters in a movie like this? And finally, it’s unapologetic. This movie claims to be an action movie and it delivers on that claim.
The only downside of this being a callback to the old action movies is the annoying camerawork at times (no one shot action in the 80’s like people do today, and that’s just unfortunate) and the CG. You kind of lose that nostalgic feeling when you see a spray of CG blood. I just don’t understand the reasoning behind those two decisions. But as I said, they are forgivable.
The Expendables isn’t a masterpiece and it doesn’t pretend to be. This film was supposed to be in the same vein as action classics like Predator and Commando, and aside from some practical deviations, it is. It’s not better than the classics, but it’s certainly refreshing to see a hardcore R-rated action movie in the theatres again. I hope Stallone keeps it up, because, in the spirit of the excess of the 80’s, I want more, more, more.
Posted by Eric Harris at 9:50 PM