The Coens made a neo-western with No Country, now they've made a plain old western. I'm glad they did.

Remakes seem to be almost universally 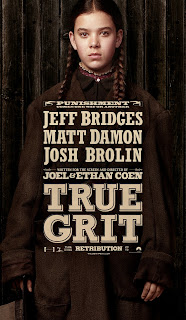 
Random Thoughts
Barry Pepper plays Ned Pepper. I just thought that was amusing. Not since Kevin Dunn acted in a film with a character named Kevin Dunn (Snake Eyes) has such a coincidence occurred. Aside from that, I can’t stress enough how vastly different Pepper looks in this film. His performance will make you wish he had been the main antagonist throughout, although Chaney isn’t truly an antagonist, either, to be honest.
I dug Cogburn’s intro via an outhouse, just a really great way to introduce the character.
I can’t find any confirmation of this, but I am 99% sure that the voice of Lawyer Daggett is none other than J. K. Simmons. It was a nice touch adding his voice, assuming I am correct, that is.
The nearly word for word adaptation of the court scene from the novel was great. It was as if the Coens handed the actors a copy of the novel rather than a script, which is a possibility.
Posted by Eric Harris at 4:23 PM