Much like Bruce Banner's dad, this film just couldn't figure out what it was supposed to be.

The Tourist, the latest from Angelina Jolie and 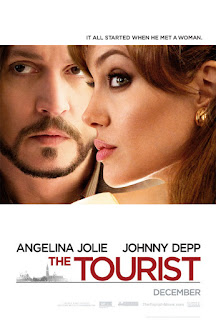 Johnny Depp, is a film that never figures out what it wants to be and ultimately becomes a boring, forgettable film. The film is about Frank Tupelo (Depp), an American tourist who gets stuck in the middle of an elaborate international sting operation. Elise (Jolie) is the ex-lover of the criminal the sting is after. She is watched constantly, so the criminal tells her to find someone who matches his height and build so the cops (and the mobster he stole money from) think that the stranger is him. This all seems fine and just complicated enough to be slightly interesting, but it’s only interesting on the surface.
The Tourist never really takes off and this is due to a lack of chemistry and interesting dialogue. There is supposed to be this immediate fire between Depp and Jolie, but it simply is not there. Because of this, the film contains many quiet moments of these two actors staring awkwardly into space or at each other. When they do talk, it is almost never interesting. Frank asks bland questions that Elise never answers. A lot of the film consists of Depp and Jolie riding boats in silence in Venice. Speaking of Venice, the locations end up being one of the only interesting parts of the film.
The lack of chemistry would be forgivable if the film made up for it with style, but the filmmaking is quite boring as well. Co-writer and director Florian Henckel von Donnersmarck shows none of the promise from 2006’s The Lives of Others. Aside from one moment near the end of the film, the look of The Tourist is as forgettable as its content. Perhaps von Donnersmarck was held up because this was a big budget studio remake of a 2005 French film. Here’s hoping he does something more original for his follow-up.
The stars themselves are some of the only redeeming qualities to this film. Depp and Jolie may not have much in the way of chemistry, but they are still decent actors. Jolie is outshined by Depp here, though. Jolie is forced to play this heartbroken, depressed woman and that is not cinematically interesting in a movie that is meant to be more entertaining than heartfelt.
Jolie doesn’t fit into the action movie aspect of the film, but The Tourist isn’t an action movie. Is it a comedy, though? Depp’s character seems to point in that direction. Depp gets the only funny things to do in the film: be slightly bumbling, speak Spanish to Italians, get chased in his pajamas, etc. Some of this stuff works and is amusing at times, but then the movie changes pace again.
Just when it seemed like the film was some kind of light action comedy there would be a scene that made it seem like the film was a serious drama about Depp and Jolie’s relationship. Then the mobster stuff was thrown in and the film became a bit dark and serious as people started getting murdered. But there was never a true sense of danger. Then there’s the whole mystery of who Elise’s criminal boyfriend really is. That mystery may be what the film tries to focus on, but it never gained my true interest.
The mystery aspect could potentially make The Tourist one of those films that requires you to watch it again to look for clues, but it is all so boring and the stakes of the film are so unbelievable that it never works. Who cares if Frank or Elise ever find true love? Who cares if the cliché mobster gets his revenge? Who cares if the bitter Scotland Yard inspector (a wasted Paul Bettany, who does his best to make the role worthwhile) finds the criminal? Who cares? If a film can’t hook you into slightly caring about its characters, then it can’t keep your interest.
Normally a film devoid of emotion like this could at least keep you happy with a bit of visual flair, but The Tourist fails in that regard as well. It’s possible that the star quality of Depp and Jolie will be enough for some, but if you’re looking for true substance and interesting filmmaking, you won’t find it with The Tourist.

Random Thoughts (SPOILERS)
I just have to say that I was honestly expecting this to be a good film considering all who were involved. A true missed opportunity.
The revelation that Depp is actually the criminal the whole time should have been a payoff that made me want to watch the film at least once more to look for clues, but I really did not care. I was just happy the film was over. Maybe the whole twist thing will work for some, though.
I enjoyed Timothy Dalton in his few scenes.
That one visual flair, when all the mobsters get hit with sniper fire in slow motion, was pretty great. If only there were more moments like that.
Posted by Eric Harris at 7:24 PM