Awards bait about a stuttering king? Give it a chance, it's pretty great.

Every year a film is released that screams, “Oscar!” and this 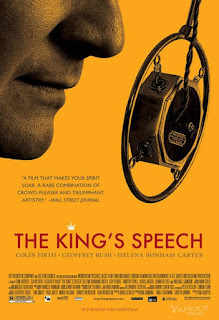 year that film is The King’s Speech. Unfortunately, some people are turned off by films that seem destined for awards because the very synopsis of such films comes off as pretentious. It’s understandable why some would be put off by the story of a stuttering Duke of York in pre-WWII Britain. That’s right; The King’s Speech is all about a king with a speech impediment. It’s easy to see why some would be dismissive when they hear “awards” in relation to that plot synopsis. But people should not dismiss this film because it truly is deserving of awards consideration. It’s compelling and, more importantly, it’s entertaining.
The King’s Speech takes place in the two decades leading up to World War II. The Duke of York (let’s just stick with Albert for his name from here on out) isn’t in line to be king, but he still has to be able to speak to the public. His father, King George V (a great Michael Gambon), pressures him and doesn’t seem to understand that the problem can’t be fixed by sternly commanding him. This has left Albert short tempered and touchy. His wife and main source of inspiration, Elizabeth (Helena Bonham Carter), devotes her time to finding the best speech therapist and this is where the film really begins.
This film is actually about the friendship between the Albert and his speech therapist, Lionel Logue (Geoffrey Rush). Lionel has a unique approach to therapy and he requires Albert to follow his rules and open up about his personal life. Albert, who is intensely protective of his personal life, reacts with outrage early on, but can’t ignore the results Lionel gets. Their sessions are combative for the most part, but a bond is created. Their friendship is realistic in that Albert can have outbursts, but Lionel accepts them and continues on in his own stubborn way. The two men are both stubborn, it’s just that Lionel is much more understanding.
Albert and Lionel’s friendship is also the source of entertainment for the film. Their sessions are amusing enough (some of the speech exercises are a bit goofy), but the way the two characters play off each other is the real entertainment. It helps that Firth and Rush are great actors. Rush is a natural when it comes to creating sympathy, so Lionel is an instantly likable character. It would be easy to dislike Albert, but Firth plays him with such sincerity that you understand his personality and want things to work out for him. The ability to mimic a stutter is only one aspect of Firth’s impressive performance. Firth’s facial expressions throughout tell more about the character of Albert than any stuttered lines of dialogue ever could.
Helena Bonham Carter is great as Elizabeth, as well. Elizabeth is very devoted to her husband and Carter embodies that quite well. On the opposite side of devotion to Albert’s cure, Guy Pearce does a fine job in a short role as Edward. Edward, Albert’s older brother and heir to the throne, likes Albert the way he is because he can control him by poking fun at his impediment. Rounding out the cast is Timothy Spall as Winston Churchill. It’s a short role and Churchill is mainly a bystander in this film, but it’s still a fun performance.
The King’s Speech serves as a bit of a history lesson, as you may have noticed from all the real characters involved. (Warning: SPOILERS FOR HISTORY.) Many may be unaware (as this reviewer was) of Edward’s abdication of the crown due to his relationship with a divorced American woman, Wallis Simpson. The idea that Albert wasn’t really meant to be king adds much more gravity to his problem. Fixing his speech is not just about being able to communicate. The struggle turns into his ability to be the voice of the people of England. The fact that this is all set during the buildup to World War II make the stakes that much higher.
This film isn’t as completely serious as it sounds and it is definitely more visually appealing that some might expect. The training sequences are fun, but they are also shot in an interesting montage. Director Tom Hooper and cinematographer Danny Cohen zoom in during one exercise and zoom out to reveal a different exercise. It’s all very seamless. The framing of the scenes in this film is interesting as well. You get to see a lot of the sets and they are all unique and/or historical. In short, the film looks great.
The King’s Speech may appear overly serious if you only read about it or just watch a preview. Ignore the serious hype the film is getting and you’ll realize that this is a touching, funny, and interesting drama about friendship, devotion, and patriotism. Does it deserve awards buzz? Yes, but, more importantly, it deserves a large audience.


Random Thoughts
This isn't really a comment on the movie, but more of a comment about the historical situation. It's interesting that this problem, a leader with a speech impediment, would be quite impossible in America. Since England is a monarchy, Albert becomes the voice of the people through birth alone. And there is no way a person without the ability to speak properly could be elected in any kind of democratic office in the modern world. I just find it interesting how time changes what type of person can be a leader.
There is a bit of a rating controversy concerning this film. The dreaded f-word will get you an R-rating if it is used twice. This film is fairly squeaky clean until a scene in which Albert lets out many expletives as part of an exercise. It's a great, funny scene...and it is the sole reason for the R-rating. It would be nice if the MPAA could rate movies based on the context of the use of "obscene" language. The point is that The King's Speech is not really an R-rated movie.
Posted by Eric Harris at 9:55 AM