Goofy, a little weird, and even crappy at times, but still decently entertaining. 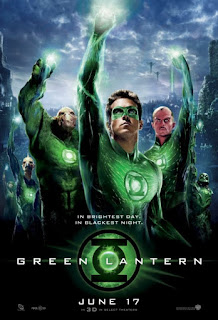 comic creation to hit the screen this summer with Green Lantern. Weird isn’t always good, but the odd elements of Green Lantern make the film stand out a bit, even if the film does get too goofy at times because of it. Overall, despite its flaws, Green Lantern still ends up being an entertaining movie.

Green Lantern is about Hal Jordan (Ryan Reynolds), a reckless pilot who is chosen by an alien ring to become earth’s protector. Yes, this is a superhero that gets his power from a magical ring from outer space. That isn’t where the weirdness ends. The film takes Hal from earth to the origin of the ring, the planet Oa. At Oa, Hal is the lone human among all of the other protectors, or lanterns. Hal finds out that there is a battle being waged between will and fear and he must conquer his own fears if he is to save the planet.

All of that should sound a bit out there, but it’s supposed to be. Green Lantern is a slightly self-aware movie. The filmmakers knew that to get away with such outlandish settings there must be a bit of humor to the film and that ends up being the saving grace for Green Lantern. Reynolds, primarily a comedic actor, is really a perfect choice for the arrogant but likable Hal Jordan. Plus, he delivers the Green Lantern oath very well.

If Reynolds isn’t enough for you (or if he annoys you, as plenty of people have complained), then the planet of Oa and its inhabitants might make up for it. Oa isn’t as fully realized as it could’ve been and it doesn’t seem like a real planet with a functioning population, but it is still a very interesting place. The best parts of the film take place on Oa and you may find yourself wishing the majority of the film had been set there. Hal gets introduced to what being a lantern is all about on Oa and, as the only human, the odds are against him. His training scenes are short but entertaining and the supporting cast that lives in Oa is pretty great. Mark Strong stands out as the leader of the lanterns though the film would’ve benefited from more scenes with him. Geoffrey Rush and Michael Clarke Duncan put in some amusing voice work as well.

Hal spends the majority of his time on earth and while the film doesn’t look as interesting in this familiar setting, there are some interesting characters there. Tim Robbins, Angela Bassett, and Blake Lively populate the rest of the cast ably, but it is Peter Sarsgaard who makes the film fun. It was hard to keep count of how many times Sarsgaard shrieked maniacally throughout the film, but each time it was amusing. He added a strange element to his performance that made him quite the interesting foil to Reynolds.

Green Lantern is a film that gets plenty of things right and manages to breathe a little life into the whole superhero origin story. For one thing, the film is refreshing because the origin of the character consists of a man putting on a ring that instantly makes him the hero. It also helps that the film is willing to play with the goofiness of a superhero’s outfit with a character pointing out that an eye mask doesn’t really disguise a person. This movie is not high art; it’s not even sophisticated by comic book movie standards. But it is a bit of harmless fun.

That said, there are still a few problems with the movie. First off, the simplistic plot elements are childish to say the least. The power of the ring is fueled by will? The opposing evil force of the universe is simply fear? That’s just weak and it leads to silly dialogue about conquering fears that are never clearly defined. It also makes the film sound too much like a Star Wars film with all the “don’t give in to your fear” lines. In fact, it’s all childish enough that it makes this movie more of a film for kids than adults, which is unexpected since comic book movies these days tend to be as gritty and harsh as possible. Perhaps this isn’t even a negative for some viewers, but if you’re expecting something with the tone of The Dark Knight, you won’t find it here.

Secondly, the effects of the film work at times (the CG suit was fine, the 3D was serviceable, and there are some great images) but are absolutely atrocious at others. Seriously, some of the effects looked like they were from a film from the late 90s (most notably in a scene involving a helicopter). The action in general was entertaining but it’s all a bit of a letdown when you consider the fact that the ring can make anything. When imagination is the limit there should be something more interesting than guns being formed by the ring.

Finally, the stakes just weren’t high for this film. There never seemed to be a true sense of danger to the film and some of the major battles were uninspired and just too easy. All of these things might be major problems for some viewers, but if you can just sit back and enjoy a slightly goofy, at times childish film, then you’ll be entertained by Green Lantern.
Posted by Eric Harris at 2:06 PM