Review Roundup - "Prisoners," "The Wolverine," "Captain Phillips," "The Place Beyond the Pines," "Machete Kills," "In a World...," and "Ain't Them Bodies Saints"

I've been severely lazy when it comes to movies lately, so it's time for me to do a quick rundown of some recent (and not so recent) films I've seen as I get closer to making my year end list.  So in no particular order, here are my thoughts on a few movies.


Prisoners
Prisoners was probably the most pleasant surprise I had at the movies this year.  The previews made the film look like misery porn with grieving parents sobbing and screaming about their lost, possibly dead, children.  Who wants to see that?  Thankfully, the marketing was deceptive.  Prisoners does have multiple scenes of distraught parents, but it is not some Oscar bait movie in which actors see who can fake cry the most.  It is actually an engrossing mystery of a film that kept me extremely interested throughout.  It's also one of those movies that just needs to be watched rather than read about.  So if you skipped it because it looked depressing, consider giving it a chance.

The Wolverine
I really wanted to love this movie, but I ended up just kind of liking it.  I realized that the film had failed for me when I started to write a review months ago, and couldn't get past the first paragraph.  There's nothing truly wrong with the film, and it is better than the first standalone Wolverine film, but it was also a bit boring.  I have never been a fan of characters who want to be rid of their powers, and this film has Wolverine hiding out in the woods being reluctant and whatnot, and I don't want to see that.  Then Wolverine starts to lose his powers and he's basically a regular human for the bulk of the film.  I don't want to see Wolverine get nursed back to health for an hour.  Yes, there are some action scenes, a few of which are decent, but overall this film just left me bored.

Captain Phillips
Paul Greengrass is a director known for details, so he is a great choice to film the true story of a commercial freighter captain and his ordeal with Somali pirates.  The film has a documentary feel to it, and it features some truly suspenseful events.  Tom Hanks is great as the titular captain, but it is Barkhad Abdi as the leader of the Somali pirates who steals the show.  He humanizes what could have been a very one-note character. You don't hate the pirates; you feel sorry for them.  It's a hard line to walk.  How do you create sympathy for what would traditionally be the villainous role without inadvertently turning them into the hero?  Thanks to the writing and the performance this tough task was accomplished.


The Place Beyond the Pines
I watched this film a few months back when it came out on video and really enjoyed it.  Normally, I would just not write anything about it, but this one might crack my Top Ten this year, so I felt the need to address it. I was not a fan of writer/director Derek Cianfrance's previous film, Blue Valentine.  It was a well-made film that juggled non-linear storytelling nicely, and it featured great performances, but the subject matter just depressed me.  I know it was meant to be depressing; it just wasn't for me.  That's why I was glad to see his second feature, while very character-driven, involved a bit more action.

This sprawling film is unique as it shifts from one character to another.  It defied my expectations, and that is something I always like to see.  This is one of those movies in which I couldn't accurately predict what was going to happen from one moment to the next.  Add the elements of Blue Valentine to a story like this and you have one of the best films of the year.


I guess this was a one-note joke for most people as this ridiculous sequel received both poor reviews and box office returns.  I liked it for all its insanity.  The cast is great, and it's very dumb fun.  The first one was more enjoyable because the joke was fresh, but this film is just as entertaining.  Not much else to say for this one.  Check it out if you liked the first one and feel like seeing some crazy crap.


First off, I'm not sure if the poster is meant to be an homage to The Lives of Others, but it reminded me of that amazing film, so I'll be watching that again soon.  So there's that.  In a World...is the feature writing/directing debut of Lake Bell (Adult Swim's Children's Hospital) about voice over artists.  In particular, it's about the lack of female voices in that world.  There's a lot going on in this film, perhaps too much, but it was an interesting and funny movie at times.  Everything about it is okay, but nothing stood out to me.  I expected a few more in-jokes about the industry and the ridiculousness of movie trailers.  Instead, it was a lot more about personal relationships.  The drama with all of that was decent; it just wasn't what I was expecting.


Here are the two posters so you know what I meant with that first sentence: 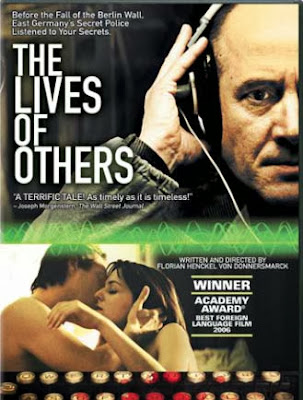 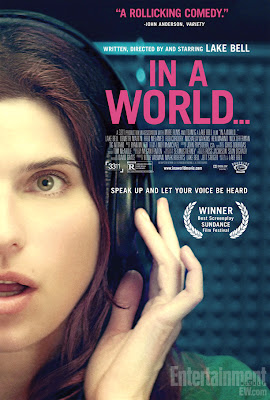 Ain't Them Bodies Saints
This movie never really found much of a release, and it's easy to see why.  That is not a knock against this film, as it already has a bit of a following.  It's just one of those movies that is never going to be very popular.  Many will refer to it as a hidden gem.  I am not one of those people.  Although I loved the cast, I found this to be too much like a Terence Malick film.  I like Malick, but I only want to see movies like his if they are actually made by him.  But truthfully, there's nothing really wrong with the film.
Posted by Eric Harris at 2:32 PM

Email ThisBlogThis!Share to TwitterShare to FacebookShare to Pinterest
Labels: Ain't Them Bodies Saints, Captain Phillips, In a World..., Machete Kills, Prisoners, The Place Beyond the Pines, The Wolverine