"Insomnia" - The Forgotten Film in Nolan's "In" Trilogy

*The main purpose of Why Do I Own This? is to take a movie from my personal collection and answer that question. I then decide whether or not to keep the film. 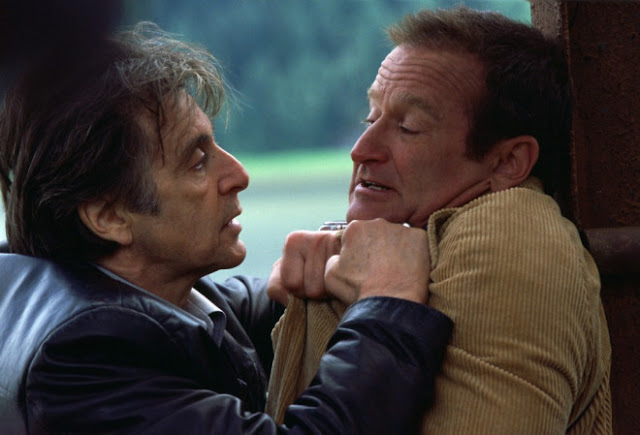 This one of those movies I forgot I owned and nearly forgot existed at all. This is surprising since Insomnia is directed by Christopher Nolan, and it's a pretty good movie starring Al Pacino, Hilary Swank, and Robin Williams. Compared to Nolan's other films, however, Insomnia is quite plain. There is no superhero (The Dark Knight trilogy), no space travel (Insterstellar), no magic (The Prestige), no narrative trickery (Memento), and no dream manipulation with zero-G fight sequences (Insterstellar).  (To be fair, there's also Following, but to my shame, I have yet to watch Nolan's first film.) Insomnia is easily the most traditional film Nolan has made, for better or worse. I do like Insomnia, and rewatching it was interesting since it had been so long, but it is definitely my least favorite Nolan film, and definitely the lesser of his "In" trilogy of Insomnia, Inception, and Interstellar. (Pretty sure that's not an actual trilogy, but it's weird that he's made three movies that start with "In.")

So why did I buy this? Well, looking at the case, which is one of those half-cardboard/half-plastic jobs from the early days of DVD when you had to look closely to see if you were buying the full screen or widescreen edition (I always tried to go with widescreen), I noticed some sticker residue over the barcode. Then I remembered where I got this movie: the local videostore. The sticker residue was from the low quality stickers the store used to cover the original bar code, which bothered me enough to remove it. (I'm weird like that. I also make a point to remove the security device from every movie I buy.) My local video store, a Video Vault that eventually became a Movie Gallery before closing, used to sell their old DVDs. They were usually overpriced, but if you bought four, you got the fifth for free, which made it a slight deal. Insomnia was definitely that fifth, free DVD.

It's not that the film is unwatchable after a first viewing, it's just that, for me, it's only worth watching again once you've forgotten most of the plot. That's not enough rewatchability to warrant a purchase. But since I did rewatch it, I guess I should weigh in on it.

The two main performances are the main takeaway from watching Insomnia in 2016. Pacino has long since lost legitimacy, but back in 2002 (when this film was released) he still appeared to be trying. Interestingly enough, Insomnia would be the perfect film for him to make today, since the role calls for him to basically sleepwalk. Pacino's detective is suffering from the titular insomnia, since he's covering a murder case in Alaska during the season when the sun stays up around the clock. He looks rough, and plays the part perfectly. He also employs his talk quietly then EXPLODE technique to good effect before it became a joke. And while I haven't seen all of his movies since Insomnia, I still think it's safe to say this is his most recent great performance.

The true star and reason to watch this movie, though, is Robin Williams. After his unfortunate death two years ago (it does not seem like it's been two year already), most people pointed to his Oscar-winning performance or to a performance they loved from their childhood. Insomnia went mostly unmentioned, which is a shame. Williams turns in a creepily calm performance that is vastly more interesting than a typical murderer role. Williams will be remembered for his more antic performances, but it's his work in films like Insomnia that is truly impressive.

Mentioning that Williams's character is a murderer might seem like a spoiler, but that's what makes this film stand out slightly from the pack. The film is not concerned with who the murderer is; the focus is on the individual morality of the three leads. This applies to Swank, too, who I don't have much to write about because her character, the starstruck local cop, is the least interesting of the three. Watching these three characters wrestle with their consciences and actions is much more rewarding than simply pointing to a character and saying, "They're the killer!"

Finally, while this is Nolan's least interesting film, visually speaking, it is still above average in the style department. The locations make for beautiful and interesting backdrops, but the editing and camerawork have the lasting effect, as Nolan attempted to put the viewer inside Pacino's troubled, tired mind, and he succeeded.

I covered why I bought this film, but why do still I own it? Before I rewatched it, I would have said this movie had no place in my collection. But now, I've decided to keep it. Partly, it's because I'm a Nolan completist (I consider him one of my favorite current directors. I rewatched Insterstellar [my favorite of his "In" trilogy] recently and was surprised at how interesting and effective I found it after my fourth viewing.) I'm mainly keeping it because of what I realized when I rewatched it: this film is very interesting once you've largely forgotten it. So I'll hang onto it and watch it again sometime around 2026.

Deepwater Horizon - The second film in Peter Berg and Mark Wahlberg's trilogy of true American stories (the first being Lone Survivor and the next one being Patriots Day) is just as well-made and effective as you'd expect. It's refreshing that Berg and Wahlberg (no relation) tend to focus on the event itself rather than the aftermath, especially since this event in the news was almost solely about the environmental impact. The disaster on the rig itself is worthy of its own film, and it hits on every note a film should. There's nothing flashy or very remarkable from a filmmaking standpoint; it's simply a good, effective film about a tragic event.

The Girl on the Train - This one disappointed me a bit. I liked Emily Blunt's performance, but the film overall felt like a slightly bigger budget Lifetime movie. I give it a few bonus points for a surprisingly gory scene near the end, but this film simply did not work for me. I didn't hate it. I'm just indifferent to it. Full disclosure: I did not read the book beforehand, and do not plan to after seeing this adaptation.
Posted by Eric Harris at 9:19 PM