I just love any movie that has a plot element built in that allows a character to die multiple times.

Writer-director Duncan Jones made a splash 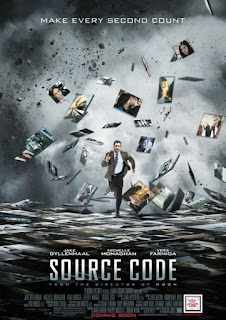 with his 2009 debut feature, Moon (it made my top ten of that year). It was an interesting and entertaining sci-fi film and made many people eager to see what project Jones would make next. Thankfully, Jones stuck with the sci-fi genre with Source Code and while he didn’t share a writing credit on this one (it was written by Ben Ripley) it is still an engrossing film with a bit of visual flair.
Source Code is about a secret government project that allows a soldier, Colter Stevens (Jake Gyllenhaal), to take over a person killed in a Chicago terrorist attack for the last eight minutes of the victim’s life. This is not a time travel movie, though. Stevens can’t stop the attack; he can only search for the bomber so the authorities can stop future attacks. This makes Source Code a sci-fi mystery film for the most part and it is a compelling mystery. Stevens can go back as many times as need be to find the bomber so the same eight minutes plays out quite a bit.
This doesn’t mean that the eight minute segments play exactly the same way, of course, but it is populated by the same characters and because of that, the viewer gets to play the part of the detective as well. This is a film that challenges to viewer to watch every part of the screen, searching for clues and/or suspicious behavior. It really makes the movie fun to watch.
At this point you might be wondering about the same time period playing out over and over again. Haven’t we seen Bill Murray in something like this before? And what about this Stevens guy taking over someone else’s body? Is Scott Bakula in this? Yeah, there are similarities between Source Code and Groundhog Day and “Quantum Leap,” but it’s not that big of a deal. If you go back far enough, everything has borrowed from something over time. A film is only a rip off if it doesn’t attempt to be its own film, though. Source Code is certainly its own film with its own ideas and many of those ideas will lead to after-film discussions.
There is one other similarity to Groundhog Day, though: this film has a bit of comedy to it. First, there’s the gimmick of seeing the same thing over and over again. The main character can start to play around with that. Second, and more importantly, these are eight minute segments and Stevens has infinite lives so he can play it out a bit differently each time and sometimes his attempts are a bit humorous.
Some of the humor in Source Code is thanks to the script, but a lot of the credit belongs to Gyllenhaal. He has the flustered part down in the beginning when his character is constantly confused. But he shines once his character catches on and gets into detective mode. Gyllenhaal’s improvised interrogation scenes are very amusing.
Source Code is not a straight up comedy, though. There are a few elements that pack a real emotional punch in the film. First off, there’s Christina (Michelle Monaghan), who Stevens makes a connection with after multiple first meetings. Stevens also has issues with his father. And you start to feel for Stevens himself, who it basically trapped in the titular Source Code until he completes his mission. Side characters have a bit of an arc as well with Vera Farmiga playing Stevens’s handler who develops a bit of a connection to the beleaguered soldier. Jeffrey Wright rounds out the cast as the off-putting boss of the operation.
A sci-fi film with lofty ambitions like inhabiting another person’s existence and traveling to other realities has the potential to be loaded with impressive visuals, but Source Code holds back a bit, to the betterment of the film. The lack of in-your-face visuals allows the focus of the film to remain on the mystery and the emotions of those involved. That’s not to say there are no interesting visual flairs. There are a few cool slow motion scenes and an interesting freeze frame. The show stealer (skip to the next paragraph if you want this to remain slightly unspoiled), though, involves a smooth camera movement followed by someone jumping off a moving train while the camera stays with the character who gets scuffed up in real time. Sure, CG was involved but the scene still had a wow factor to it.
Source Code has ambitions beyond visual flair, though. Not to spoil anything, let’s just say the definition of reality is messed with a bit. This has left some people to bash the film’s ending for attempting to get into deeper issues, but some (including me) will applaud it. This is a movie that could play it safe and stay normal, but dares to go deeper. That’s a rare thing, so you should check out Source Code while you can. It’s easily one of the year’s best films so far.

Random Thoughts (SPOILERS)
The ending brings up some major ideas. First off, the idea of creating these alternate realities. Which reality is the "real" one? Or is there such a thing? After watching plenty of "Fringe" I just accept that there are multiple relalities all happening at once and I can only assume that the Source Code just kind of throws a wrench into the works.
Another thought I had about the ending was that since the reality keeps going after Stevens "dies," then perhaps the film is making a claim about the existence of an afterlife. If you fall into the school of thought that the afterlife could potentially be very much life real life, then Stevens may have entered a kind of personal heaven.
Is the idea of a heaven for a character "too happy"? I can see that argument (I can imagine having that very argument in the past), but it worked for me and I found it to be quite daring rather than an attempt at a crowd pleasing "happy" ending.
Of course, there may be a better argument about this idea of destiny and fate since Stevens had visions of the film's final moments every time he entered the Source Code. But let's say his traveling in and out of the Source Code is basically soul transfer. If so, then maybe he was dabbling in the after life a bit during his trip from Stevens to Fentress. If so, that would explain the ending as the afterlife since he was already seeing glimpses of it.
But hey, these are just theories. I just think it's cool to have a well made film that lends itself to multiple theories.
Finally, the fact that Stevens is dead the whole time may feel like a Shyamalan-like twist, but I felt that it was revealed early enough to remain effective. It didn't feel like a gimmick, either. It really added to the seriousness of Stevens's situation.
Posted by Eric Harris at 7:04 PM