"How I Learned to Stop Worrying and Accept that Jason Statham Cannot Die...

...or Jason Statham Can Only Be Killed by Martian Ghosts, Jet Li, or William H. Macy."
*If it wasn't clear from the title, this article is going to contain spoilers for a lot of Jason Statham movies...and Executive Decision...and Romeo & Juliet.
I’ve always considered Jason Statham a very 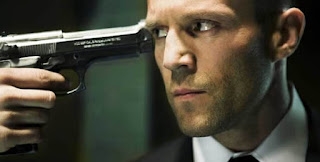 unlikely action star. After his stint in Guy Ritchie’s first two films I found it interesting that he would assume the role of the everyman action hero. Oddly enough, the cockney rhyming hustler from England was a natural in the action genre. I am pretty much a Statham fan at this point, having seen almost all of his films (though I certainly did not like every one of them). It was only after watching his latest action effort, The Mechanic, that I realized something peculiar: Jason Statham is borderline immortal.
Let’s start with the last film first. In the original Mechanic, both characters deservedly die at the end. It made sense, Bronson was remorseful for his years of killing and Jan-Michael Vincent was just cocky and annoying, so their deaths worked for me. Fast forward to the remake. Looking good so far, Statham blows up at a gas station and Foster blows up in a fancy car, roll credits, right? No! Statham did a crazy monkey roll away from the vehicle just in time to survive! Why? Is it sequelitis? C’mon, like there was ever going to be a chance for this one to get a theatrical sequel. Even if it did get the sequel treatment it would probably go the way of another Statham remake, Death Race. In that sequel, which was DTV, Statham was not involved and if there is a sequel for The Mechanic, it is doubtful he would be in it.
The lack of Statham’s death bothered me. His death would have made sense as being faithful to the original “and” it would make sense for this movie in its own right. You might be thinking, “Big deal, it’s just a Jason Statham movie, and not a particularly good one at that.” I understand that sentiment, but there was this nagging question in the back of my mind: had Statham actually ever died on film?
Not to leave anyone in suspense: yes, Jason Statham has died on film. In my extensive research (where’s the ironic font when you need it?), I have found just three possibilities out of twenty-six films. One of them is an obvious Statham fatality, while the other two could potentially be argued.
First, Ghosts of Mars, the John Carpenter sci-fi film about, you guessed it, ghosts on the planet of Mars. Statham wasn’t a star of this one and it was actually one of his earliest action efforts. In other words, he was still expendable at this point because he wasn’t a name, which kind of makes this death null and void. But I’ll accept it. Consider this, though: Statham has only been definitively killed onscreen by Martian ghosts that inhabit human bodies turning them into kill-crazy monsters…and it took a few of them to take him out. (Time out to acknowledge the greatness of Mr. Carpenter. Ghosts may not be his strongest effort, but the man killed off Statham, and for that, I salute him.)
The second film is Cellular, but this one seems criminal to count. It was before Statham could share top billing in a film like The Expendables. Plus, he’s playing the clichéd villain in a crappy movie that is more of a Nokia commercial than it is a film. William H. Macy does put him down, but I didn’t see him in a body bag…and who knows? Those clichéd villains rarely stay dead after one shot. But yeah, he pretty much died there.
Third up is War, one of the many Jet Li co-starring vehicles for 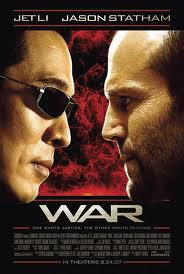 Statham. The film delivers on its promise as Li and Statham go to war against each other. The movie’s poster sets up the idea that one of these guys has to die. Technically, Li died very early on, but through a ridiculous plot twist, his identity stays alive, so victory for Li. He does take out Statham, but it’s another of those vague deaths. We see a shot hit Statham and he drops, but there’s no close up and it wasn’t a head shot. Unless we are shown a close up of Statham’s face and hear an audible death rattle, I’m claiming this one to be open-ended. But once again, yeah, he’s kind of dead. (Side note, there could be an entire article on the evolution of the Statham-Li matchups. I would say that Statham is clearly winning the battle at this point with his higher billing in The Expendables.)
Now your question is, “What’s with this stupid article? All you’ve done is proven yourself wrong, albeit begrudgingly.” To that I say, “Why are you still reading?” Just kidding. I justify this article because those deaths were weak and/or too early in Statham’s career to truly count. This article exists because of all the recent ridiculous ways Statham has laughed at death on film.
How about the Crank series? Those two films are literally about Statham dying the entire film. This tells me Statham is in on the joke that is his newfound cinematic immortality. Chev Chelios has to run around keeping his heart pumping with the promise that he will die in the end. The guy even falls out of a helicopter without a parachute at the end of the first one, only to wake up miraculously alive for the sequel. I know those films are tongue in cheek, but is it asking that much to at least kill the guy off in the sequel?
Then there are the annoying fake deaths. In the Death Race remake, he uses a decoy to get away and lives happily ever after. Even more infuriating, in the lesser known Chaos, Statham’s character actually fakes his own death. That’s almost too much for me, but it gets much, much worse.
Jason Statham has defied the works of William Shakespeare to stay alive on film. Not since Steven Seagal refused to film his ridiculous death scene in Executive Decision has a more atrocious example of immortality been attempted. (To be clear, I am not comparing the works of Shakespeare to Executive Decision, though that film is kind of a fun watch.) I am, of course, referencing Gnomeo & Juliet. Statham voiced Tybalt in the recent animated film and as we all (should) know, Tybalt is killed in the original play. Tybalt the garden gnome does get broken in the film, which is the equivalent of death in a children’s movie, but by the end he has been reassembled. Statham’s desire to live knows no bounds.
To wrap up, this article has obviously been a bit facetious. I enjoy Statham’s films, if for nothing else than to see if he dies at this point. But it’s strange how he survives so much. I’m sorry, but this guy does not deserve Schwarzenegger-like life spans in his films. He has potential to be that one action star that can also die…it would be original. Instead, he stars in movies about people who are expendable but actually aren’t at all since so many of them survive. He fakes his death. He plays characters that are supposed to be dying the entire time, but they don’t. But what can you do but hope for next time? Statham does have a film in the can right now called Blitz. It’s about a cop (Statham) who is hunting a serial killer. (Sigh.) I wonder who’s going to come out on top. I’m not condoning mass murder, but my fingers are crossed for the serial killer.
Posted by Eric Harris at 12:58 AM