If there is one movie that truly earned its Kurgan this year, it's Hesher. 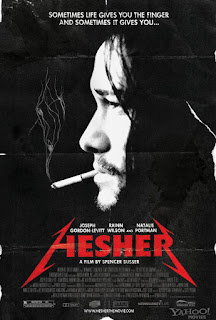 Just looking at the title design of Hesher (Metallica-style lightning bolts on each side), I knew I was in for something special. It’s kind of hard to describe just what kind of special Hesher is, but this is an original, hilarious movie. It gets a bit messy tonally at times, but overall this Joseph Gordon-Levitt film is a fresh and dark comedy(?) that is worth a watch.

Describing Hesher is a bit of a challenge, but here goes: this is a film about a family dealing with the loss of a mother. Insert a hobo/rocker/van owner who imposes himself in the family which is too numb to protest his presence. Is Hesher there to fix their problems? Is he even real? Who cares? He’s awesome.

Hesher is aptly titled because even though he isn’t actually the main character Hesher is by far the most interesting part of the film. The story itself is compelling, but plain. It’s about a T. J. (Devin Brochu) and his father (Rainn Wilson) and their issues after T. J.’s mother has died. Sounds like the making of a depressing indie film, right? Well, it would be, if Joseph Gordon-Levitt didn’t show up as the titular Hesher.

Hesher isn’t the most interesting character ever written, but he is hysterical. Hesher likes to rock out to Metallica and Motorhead, he drives a trashy van, he is technically homeless, and he’s covered in hilarious homemade tattoos. That alone makes him funny visually, but his interactions with everyone involved make him something more. Hesher tells it like it is…to a fault. If there’s some unspoken issue between two characters that would normally stay unspoken in polite society, Hesher is more than happy to point it out in vulgar detail. It’s not all that unusual for a character to say inappropriate things, but Hesher is surprisingly succinct when it comes to evaluating situations. He’s funny and rude, but he is actually enlightening at times.

The fact that Hesher can give insight to the family’s problems doesn’t mean this is some sappy film. He seems to help, sure, but one could argue that he does just as much damage along the way, both physically and emotionally. If there is a fault to Hesher’s evaluations, it’s that they lead to some moments are simply too devoid of humor. At times, the film cannot decide if it wants to be a dark comedy or just bleak. These moments are few, though, and the film doesn’t suffer all that much from it. The tonal shift can be a bit jarring at times, though. It’s tough to watch a film that tries to get you to laugh one minute and despair the next. But perhaps that is the point, since life itself can be like that.

The film may be questionable tonally, but it thankfully stayed away from the cliché of making Hesher some imaginary character. That isn’t a spoiler or anything, but in the first few scenes Hesher is so outrageous that he seems to be an extension of T.J.’s desire to take action that it seems like he might exist only in T.J.’s mind. There is certainly an argument to be made for that, except that so many other characters acknowledge his presence. In a way, the fact that he actually exists makes him, and the film, even stranger and funnier.

Hesher works because of its great cast, as well. Gordon-Levitt is breaking new ground in this film and he alone makes the movie worth watching. He just perfectly inhabits the role. Rainn Wilson is impressive as the depressed father, too. His quiet and desperate dinner table scenes work well. Natalie Portman shows up to play a kind of love interest role and she does fine. And Devin Brochu does a great job acting opposite all of these actors and even outdoing them at times.

This dark/family/comedic/dramatic film is definitely worth checking out now that it is out on video (unfortunately it was never released widely in theatres). It’s uneven in places, but overall it is a hilarious movie. Some may feel the need to analyze it a bit too closely, and perhaps there is something more to it, but if you try to “figure” out this film you’ll end up having to stretch things a bit too much and, more importantly, you won’t enjoy it. There may be some deeper meaning to this film, but I’ll be damned if I know what it is, and I couldn’t care less. I can’t imagine Hesher himself trying to look beyond what is right there in front of him, so I won’t either. I’ll just sit back and laugh like a bastard.