Football may be going full steam right now, but there's a great baseball movie that deserves your attention. 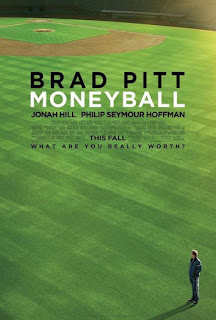 Baseball is often derided as a boring game (I happen to love it), so it seems like a long shot that a baseball film, a baseball film about a general manager no less, would be entertaining. Moneyball defies expectations to be one of the year’s most enjoyable films mainly because it is not simply a “baseball movie” but is actually just as much a character piece about Billy Beane. What helps immensely is that Beane is portrayed by Brad Pitt, who is on top of his game right now.

Moneyball is based on the true story of Oakland A’s general manager Billy Beane, who decided to take a different approach to finding players back in 2002. The system, referred to as Moneyball, placed a stronger emphasis on statistics rather than the intuition of scouts. This was a break from the traditional way things went in a game that is obsessed with tradition. In other words, Beane was risking his job and reputation by playing Moneyball.

A film about shaking up things in a general manager’s office doesn’t exactly scream action, which is why the film thankfully takes a largely comedic tone. Beane does something that people don’t fully understand so there are plenty of quizzical reaction shots and statements of disbelief. It is almost too easy of a gag, but it works. It works because of Brad Pitt.

Pitt is perfectly cast as Beane, a former athlete who seems to be constantly moving for fear of becoming bored. Pitt could play this role in his sleep, but he really seems to be enjoying himself and it shows. His interactions with a befuddled Jonah Hill are always funny and keep the film moving along nicely. Philip Seymour Hoffman gets a few good scenes as manager Art Howe, as well. In fact, pretty much anyone in a scene with Pitt gets to give their best, “You did what?” face. And somehow it manages to be amusing every time.

Moneyball is not a straight up comedy, however. There are some moments that attempt to add impact to the film and they sometimes feel a bit forced. It’s not that the stakes of the film aren’t high (a man’s livelihood and an entire organization is on the line), but it’s hard to buy the more dramatic moments. These moments are few, though, and they mainly feel out of place because the musical score tries so hard to let you know that it’s time to get serious in these moments.

The film does have dramatic moments that work. Beane’s relationship with his daughter is touching at times and some of the players are given a bit of personality which does give the movie more emotional impact. It’s the fleshing out of Beane’s character that makes the film stand out as one of the better sports movies of recent years. He is not just a cocky loose cannon or anything like that. To be sure, he exudes an almost egotistical confidence in himself, but that doesn’t make him an unlikable character because he is also insanely charismatic. The subplot of his fear of bringing bad luck (he was a once promising baseball prospect who flamed out early) makes him a sympathetic character as well.

Moneyball is still a baseball movie, though, and fans of the game should find plenty to like about it. There aren’t as many baseball scenes as you would find in a movie like, say, Bull Durham, but there are a few and the clubhouse scenes are fun. If you follow baseball at all, even the dialogue of the film should prove entertaining. Just listening to the general managers make moves and discuss players is funny at times (probably because Aaron Sorkin is a credited screenwriter) and it manages to be simple enough for non-fans to follow along.

Moneyball is a straightforward sports film/character piece that makes for a great watch as baseball season winds down and football starts to dominate the sports page. If you’re the type who skips over the sports page and never watches Sportscenter, don’t be scared off by the baseball premise. Sure, this is a sports movie, but it’s well-acted and the focus is mainly off the field. And, more importantly, it has Brad Pitt in it and he’s as good as he’s ever been. So give the football a rest for a day and check out Moneyball.