"This Is the End" Makes the Apocalypse a Very Funny Thing

The Kurgan loved it, but he thinks all end of the world movies are funny... 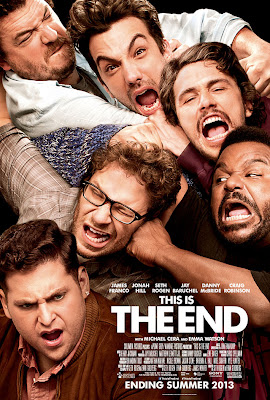 Reviewing comedies isn’t really my thing these days, but I do make exceptions for interesting comedies.  This Is the End is, at the very least, an interesting film.  End is unique not because it boasts a who’s who from comedic films of the last decade; it is different because all of the actors are playing themselves (sort of).  The fact that this is the most anticipated comedy of the year for me (and others, I assume) says something about our obsession with celebrity.  Is it an easy laugh to just have Seth Rogen play himself and riff on his past successes and failures to a knowing audience?  Yeah, but it’s still a laugh.  In a world filled with Kardashians and Real Housewives, I don’t think it’s all that terrible to use celebrity for comedy.  At least these people are doing it intentionally.  I was laughing with the guys of This Is the End; whenever I am forced to watch the other type of “celebrities,” I’m laughing at them.
Celebrity aside, This Is the End takes a familiar premise, the end of the world, and plays it for laughs.  It only makes sense that we’ve come to this.  There are so many hyper-serious end of the world movies out there.  Isn’t it time we laugh about it?  And honestly, who hasn’t had the conversation with their friends about what they would do if the world ended or how (zombies, rapture, aliens?) they wish it would end?  For anyone who has thought or talked about the end of the world, or needs a break from the bleakness of films like The Road, this film is for you.
As with all comedies, though, it all comes down to whether or not you like the actors.  I don’t want to spoil all of the cameos (although most surprises have been shown in previews), but there should be something for nearly everyone in this film.  That said, the main players are Rogen, Jay Baruchel, James Franco, Craig Robinson, Danny McBride, and Jonah Hill.  Most people enjoy most if not all of these actors, but some might be put off by a few of them.
What’s great about End is that you might like it even if you hate some of these guys.  This is a very aware movie.  Rogen comments that some people find his laugh annoying; Franco is called out for his perceived pretentiousness, etc.  Once again, these are easy laughs, but laughs nonetheless.
The only issue some may have with the film is the amount of references to other works.  It’s not required that you see everything else these guys have done, but it certainly helps.  I’m a big fan of most of these actors, so I was able to pick up on references to Freaks and Geeks, Eastbound & Down, Your Highness, and Pineapple Express, to name a few.  I would say the closest thing to required viewing is Pineapple Express.  The majority of that cast is in this film, and they even film a homemade sequel to it within the film.  You might not find that sequence funny if you have no clue what they’re referencing.
This Is the End is mainly about the apocalypse, though.  While it is filled with outlandish laughs, there is still the very serious threat of death and eternal damnation throughout the film.  If there is a message behind it, it’s about friendship and being a good person (which are lacking qualities among the cast of this film, apparently).  This is hardly a message film, but at least there’s a little something there.
No one is going to this movie to learn about being a good person or friend.  This movie is all about the laughs.  I loved it, but as I like to point out, my sense of humor might be (and usually is) different from the general population’s.  Perhaps the main two things to keep in mind if you’re on the fence about this movie are that it’s rated R and the cast is almost exclusively male.  Some people don’t take the R rating all that seriously, but they should.  This is certainly not a comedy for children.  It’s not a comedy for easily offended adults, either.  It’s not the filthiest comedy by a long shot, but it’s definitely not squeaky clean.  As for the lack of women in the film, this didn’t bother me (probably because I’m a man), but it might be hard for some women to identify with many of the comedic moments since this is very much a movie for the guys.  In fact, when a woman finally does show up (another moment played up in the previews) the guys instantly tense up and create a very awkward situation.  I can see a lot of women enjoying it, but they are not the target audience.
This Is the End is a comedy tailor made for fans of the all the actors involved.  So this movie is made for people like me, which is why I loved it.  But even if it’s not for you, I think it’s possible to enjoy it.  Because even if you don’t like them, it’s still funny to watch celebrities have to deal with problems that can’t be taken care of with money and fame.  And, finally, look at it this way: if you hate some of these actors, at least you get to watch some of them die.

Random Thoughts (SPOILERS)
I didn't really mention it at all in the review itself because it was getting too long as it is, and I didn't feel like finding a logical spot to include it, but Rogen and writing/directing partner Evan Goldberg deserve a lot of credit here.  Not just for the writing and everything (they've already proven that they can write some funny stuff), but for the directing.  The death scenes were handled well, and they created a decent hellscape with what I assume is a relatively small budget for an apocalyptic film.  The CG was a little cheap-looking, but I can't imagine who would care about that.  Anyway, hats off to Rogen and Goldberg.
Okay, now for the cameos that I loved.  Michael Cera.  I know, I know, it's all in the previews, but I still found him hilarious.  To take such a notoriously softspoken actor like that and turn him into a cocaine-blowing psycho is hilarious enough; to imagine that that is what Cera is like in reality makes it doubly funny.
All the rest of the little cameos are great and all, but Channing Tatum showing up later as McBride's dog/sex slave was amazing.  I lost it when McBride said he had taught him to do tricks.
Not really a spoiler, but a final note: All of these guys yelling expletives at each other will always make me laugh, but for some reason when they do it as versions of themselves, I find it absolutely hilarious.
Posted by Eric Harris at 4:50 PM