The Kurgan thinks Travolta was born to play the bad guy. 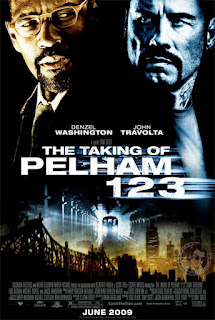 The Taking of Pelham 1 2 3 is a loud, hectic, mostly entertaining remake of the 1974 cult classic of the same name. I'm not going to spend the entire review comparing the two movies (I'm sure there are other reviews that handle the comparison anyway and the message boards can fill you in on the differences) but I do want to point out that the original is a superior film filled with tension and the new version is a bit light on the tense moments, but it is much more entertaining. Now on to this version and this version only.

Pelham 1 2 3 is about a subway heist in which Walter Garber (Washington), a demoted dispatcher, has to play hostage negotiator to John Travolta's bipolar Ryder. This film could have ended up being quite boring if it had stuck to the cliché mechanics of a hostage film. Instead, we get a lot of great dialogue between Garber and Ryder. Sure, there are the typical, required elements here like countdowns and threats to kill hostages, but the film deals with them quickly rather than dwelling on them. In other words, the film doesn't stick with the hostages too much, which is refreshing. Ryder refers to his hostages at commodities at one point and that's the way this film treats them. They just represent a required part of the story and there is no real need to get to know any of them. Normally, a statement like that would mean that this movie is pointless since the viewer doesn't care if the hostages are saved. That might be true, but the characters make up for the lack of empathy felt for the nameless hostages.

But the characters are only as good as the actors portraying them. Denzel Washington is going through the motions with this one, but that's not really a bad thing since he is consistently great in everything he's in. He just doesn't stick out or prove to be the anchor of this film. Travolta, on the other hand, boosts this film out of mediocrity. He has played amusing villains before and he proves here that he is as good as ever at being bad. Every encounter between Garber and Ryder is entertaining and funny. There is usually more hatred on display in negotiator situations, but since Washington's character is not a cop it leaves it open for the two to engage in more of a banter 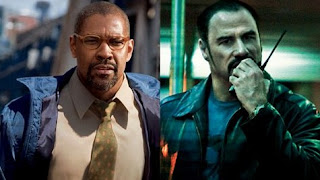 than a hostile conversation. Travolta breathes life into the film when Tony Scott's direction (more on that later) cannot. His constant, vulgar rants never get old. The rest of the cast (Luiz Guzman and John Turturro) don't have much to do although James Gandolfini is amusing as the mayor of New York City.

Travolta makes things interesting throughout, but director Tony Scott (Man on Fire, Domino) does his best to make this movie stand out as well. Sometimes he gets out of control and it all gets a bit too hectic. The camera moves too quickly for too long and the sound is overbearing during any scene featuring a moving car or people getting on and off the subway. But those moments are short and they certainly don't ruin the film. For the most part I am a fan of Scott's other attempts at style. The occasional freeze frame with the countdown was cool and Scott is great at finding one or two songs to use in his films to great effect (Jay Z's "99 Problems" in this). Some of the more annoying elements that Scott throws in there might hurt your eyes and your ears but it's not unbearable and it does tend to keep the viewer alert.

Pelham 1 2 3 is no classic, but it is at least memorable thanks to John Travolta's energetic performance. So if you want a slow boiler of a film filled with old school tension; watch the original. If you want some entertainment, although loud and chaotic at times, check this version out.

Commodus enjoyed the shootout, but soon forgot what it was all about.


Not much to say on this one. The main thing The International is known for is a lengthy shoot out scene that takes place in the Guggenheim. That scene is quite impressive but it is not 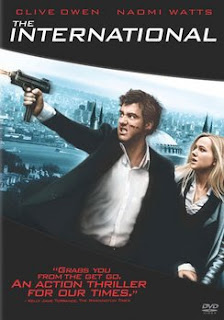 representative of this movie at all. This is not an action movie. It's called The International and it is basically all about international intrigue. Owen (who pretty much sleepwalks through this, which may have been the point, but I'm getting tired of seeing him act like this) plays an Interpol agent who is working in conjunction with the New York D.A.'s office (represented by Watts) to try and takedown a bank that is trying to control the supply of arms to third world countries at war. Of course it's much more complicated than that, but if you're into assassinations and the dark goings on of corporations then you should be entertained. If all that stuff about banks and corporations bores you, then just check out the scene on youtube. I am one of those people that dig evil corporation movies so I liked this movie. But I doubt that I'll remember much about it apart from the shootout a month from now. I think this film will have the same fate as Ronin, which is typically only revered for a chase sequence. I do want to mention one more thing, though, that makes this movie stand out to me: they actually track someone's shoe print, which is something I haven't seen for awhile.

The Kurgan thinks that "FPS" sequence is very cool. 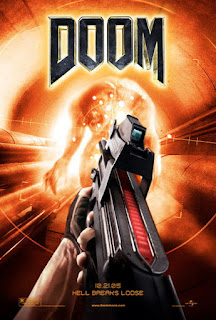 Doom was kind of cast aside after its theatrical run only to mentioned as the death rattle of The Rock's attempt at becoming an action star. So far, the critics have been right: The Rock is now only known as Dwayne Johnson and he's only made comedies and family friendly films since Doom (well, he also made Southland Tales, but I don't know what to call that, but it's certainly not an action movie). I plan on writing a full post on why Dwayne Johnson should give the action star thing another try, so I'll focus more on this movie in general and less on Johnson's work.

Doom is based on the video game series of the same name and deals with futuristic space marines battling horrific monsters that have travelled through a portal on Mars. Okay okay, let's not dwell on the story. But if you ever played the game, there should be something here for you. The film has plenty of gruesome action and it's not all that quick cut crappy action in which you can't tell who's winning a fight until it's already over. It's that nice, deliberate action that we all grew up with back when the viewer got to see the action rather than get an attempt to place us in the middle of the fight, which is way too disorienting. All ranting aside, the action is done well here and it's done in an unashamedly R-rated fashion.

Aside from that, the performances are what you'd expect. Karl Urban is good for making intense faces and yelling orders. And The Rock conveys the badass warrior quality pretty well. But it's 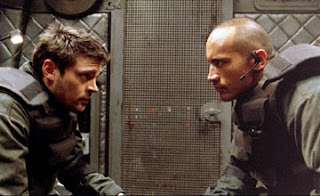 later on (SPOILER), after he turns evil, when things get really fun. For one thing, it's funny to hear The Rock drop the f-bomb, but it's also entertaining to see him get brutal and play the bad guy.

But what really sets this movie apart for me, what makes it a "classic," is the lenghty first person shooter sequence. First off, first person shooter (FPS) refers to the type of video game in which the view is supposed to be like playing through a character's eyes and this is always shown with a gun at the bottom of the screen. This film attempts to recreate that style for a sequence near the end and I was very impressed by it. Click here if you just want to check out that scene to see what I'm talking about (the music is changed for youtube, but it's the visuals that really matter anyway.

I know that space marines and monsters on Mars and video game adaptations may not equal "classic" to most people (or even "crappy classic" for most people), but it does to me. I enjoy mindless action and if that action is handled well and the filmmakers try to add something interesting to it and all of this is backed up by a screen presence that gave up on action far too early, then it's pretty good in my book.
Posted by Eric Harris at 9:36 PM

Email ThisBlogThis!Share to TwitterShare to FacebookShare to Pinterest
Labels: Doom, The International, The Taking of Pelham 1 2 3