How "Predator" Foreshadowed the War on Terror

Predator is a manly movie, quite possibly the manliest damn movie ever made. Right from th 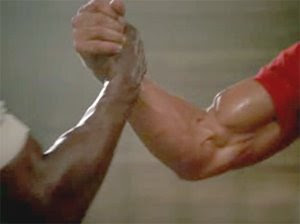 e start you know you’re watching a movie that’s about to OD on testosterone. When Arnold Schwarzenegger and Carl Weathers greet each other with a hand clasp that sounds like a shotgun blast, with their arms all greased up and impossibly muscled up, you know you’re in for a badass action movie made just for the guys. Did all that sound gay? Maybe it is. I never really thought of it like that until I typed “their arms all greased up.” 300 was called homoerotic, too. Whatever. Guys like movies that feature buff dudes killing everything around them. So homoeroticism and action movies go hand in hand. But I’m going to skip all that since that’s a theory that’s been discussed before. I’m also going to lay off the manliness of Predator, which is something else that has been established for years. I just wanted to get both of those aspects of the film out of the way for my ideas concerning Predator: terrorism and politics. But to reiterate the awesomeness of Predator one more time: remember that scene when all of the guys just start firing blindly into the jungle for about five minutes? God, that was great. Anyway…
I want to get into a theory I’ve been thinking about lately. To be honest, I was planning on writing this article for awhile and I was going to focus on the future governors in the film and how funny it is to watch Predator and realize that TWO governors (Arnold and Jesse the Body) and one gubernatorial candidate (Sonny Landham, aka Billy, ran and lost in Kentucky) are in this great, gory action movie. While thinking about that, I started to realize that you could compare this movie to the political situation in the Middle East. Usually I am against theories that say this character represents Bush and this character is Cheney and all of these people represent Al Qaeda. When I read/hear theories like that I tune out because that takes all the fun out of what should be enjoyable movies.
I was thinking along those lines when I tried to apply a terrorism connection to Predator. This is a Cold War movie. The guys mention Afghanistan (obviously not concerning the present war) in reference to the Russian war with that country in which American support led to Taliban control and terrorism. That mention meant little when this film was released in 1987. It was just a topical reference to American involvement in that war. It was about the Cold War and this movie didn’t hide the fact that it took place in the middle of the Cold War in Latin America. So there were no hidden meanings to any of it. It was a straightforward setup that would eventually lead into a hardcore battle with an alien headhunter. But, today, that alien headhunter can be seen as so much more.
Watching the movie today, when I hear the Afghanistan line, I don’t think about Russians fighting there. I think about our current war in that country and how it all got started due to terrorism. It makes sense anyway since the war on terror is basically the new Cold War with terrorists instead of Communists. So now terrorism is on my mind. If you think about terrorist tactics while you watch this film, you’ll see Predator in a new light. SPOILER warning (though if you’ve read this far I’m pretty sure you’ve seen Predator). The commandos fight an enemy that is literally invisible. These guys are fighting blind, hence the five minute shootout aimed at nothing. This is like bombing a country; aiming at targets that might harbor the enemy. Shooting blindly. Also, you can’t hit this enemy at his home. He’s an alien, so unless you master interstellar travel, his homeland is safe. Sure, terrorists aren’t interstellar beings, but they don’t really have home countries, either. At least, they don’t have home countries that acknowledge them. So attacking their “homeland” is counterproductive and/or not possible. To finish this laughable theory, you have the alien’s last line of defense: suicide bombing. The predator is basically defeated, but does he just lie there and die? No way. He’s going to take out his enemy one way or another and what better way than to set off a gigantic bomb, taking himself out along with any enemy near him. And isn’t that powerful explosion representative of a nuclear weapon? That source of power we so greatly fear will end up in terrorist hands? I know it’s heavy handed. I know if you watch this movie and try to make connections like that it might take the enjoyment out of it. I still enjoy it, though.
I think I can still enjoy this movie because all of these connections I mentioned were probably not considered when it was made. I’ve only been able to apply them after the fact. If the movie had set out to preach about the war on terror then I would probably roll my eyes every scene. But it didn’t set out to do that, so I can apply my own ideas to it to keep it interesting and maybe convince a few people to watch it again. You might not see things the way I see them, but you’ll probably forget all about it after a few explosions. And you’ll definitely forget all about it when you get to that scene when Carl Weathers gets his arm blown off, but his severed arm is still firing the gun. Remember that part? Awesome. Wait, what point was I trying to make?
Posted by Eric Harris at 1:18 AM

Email ThisBlogThis!Share to TwitterShare to FacebookShare to Pinterest
Labels: Predator, war on terror