The Kurgan loves movies about debauchery. 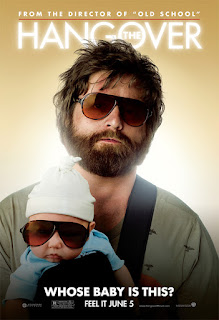 The Hangover, despite a slow start, is a downright hilarious comedy that is a welcome change from all the big summer movie fare. This movie doesn’t pretend to be anything it’s not. It is an R-rated comedy about a bachelor party gone wrong in Las Vegas. You can imagine the glorification of debauchery that ensues.

It all starts with Doug (Justin Bartha of National Treasure fame) getting fitted for a tux with his off-balance future brother-in-law, Alan (Zach Galifianakis in what is sure to be a breakout role). Doug and Allan then head off to pick up schoolteacher buddy Phil (the hilarious Bradley Cooper) and dentist pal Stu (Ed Helms). The four head off to Vegas for a drunken, but well intentioned bachelor party. So you have to wade through the expository stuff, like how Stu is afraid to stand up to his controlling girlfriend, Allan could be a problem if he drinks too much, and Phil can’t wait to get out of school and forget he has a job or a family, so you can get to the best part: the morning after the party. That’s when the guys lose the groom.

This turns the film into a funny detective film. Phil, the assumed leader of the trio, even takes down notes as they try to backtrack their steps from the night before. The detective aspect is what sets this film apart. I found it hilarious as the guys bribed witnesses and questioned bystanders to try and figure out such mysteries as why they have a tiger and a baby in their hotel room and why they came back to the hotel in a stolen police car.

I don’t want to go into any more details than I have already since parts of this film (such as the taser scene) lost their luster for me since I had seen the preview so many times. But this is not 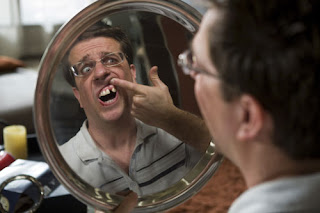 one of those movies where every funny scene is in the previews, though one or two of the funniest moments are in the preview. There are consistent laughs throughout the film and the story is actually interesting, which is a bit rare for a comedy of this nature.

Of course the jokes are only as funny as the people telling them and this cast handles them all well. I must reiterate how funny Galifianakis is in this. This is a comedian who knows how to sacrifice his body for comedy. His jutting gut and bushy beard make him a funny sight, and it helps that he can act as well. Ed Helms, he of the prominent missing tooth, makes full use of his sight gag by regularly giving a big toothy smile which makes the gap blatantly obvious in each scene. He looks so unaware of the missing tooth that the joke never got old for me. Bradley Cooper is the one holding it all together and he has a certain charisma that really gets the audience rooting for these guys to find their lost friend.

I need to say something about the makeup department for this film as well. I normally don’t pay attention to this type of thing (unless it’s a zombie movie), but they did an amazing job in roughing these guys up. Just by looking at the three of them when they wake up in the trashed 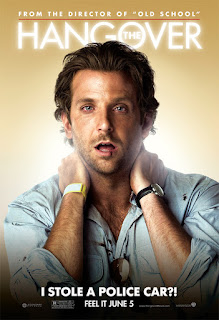 hotel suite you can tell that they have had a very long night. It adds to the hilarity of the film when you can just look at a character’s face and chuckle a bit.

The makeup is not the only sense of style in this film, though. Director Todd Phillips (Old School) manages to squeeze in a few of his trademarks: the band from Old School that performed the curse-laden version of “Total Eclipse of the Heart” makes an appearance, the song choice is dead on and very funny at times, and the director himself makes his obligatory mustachioed cameo. Phillips also manages to throw in a few amusing references to other Vegas-based films like Casino and Swingers.

Aside from those slight examples of style, this is your basic raunchy comedy, but it doesn’t make apologies for that. Instead it embraces it, and that’s what makes The Hangover so funny.

Commodus thought this was worthy of a theatrical release, but that doesn't mean it's great.

Killshot is one of those movies that has been completed for years and got shelved for some reason. Usually that means the movie is awful and the studio is waiting to dump it and release it 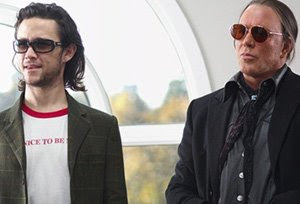 for tax purposes only. Killshot was dumped (I saw a preview for this more than a year and a half ago), but it's not because it's awful. It's not a masterpiece by any means, but it should've had a chance in theaters.


This movie, adapted from an Elmore Leonard novel, is about a hitman (Rourke) who is getting old and out of touch with the business and the troubled couple he happens upon (Jane and Lane). Diane Lane gets a good look at his face, so Rourke is determined to kill both of them to keep from getting caught. Mickey Rourke does a good job as a menacing hitman and Joseph Gordon-Levitt is great as his redneck/loudmouth partner. Though Lane and Thomas Jane seem to be going through the motions.


The story seems to go on a bit longer than it has to, even though there are entertaining scenes. But Rourke and Gordon-Levitt can't save this film from mediocrity. There isn't a real sense of danger in the pursuit of the married couple. I didn't really care one way or the other about who beat who. It was all just...numb. And John Madden tried to add a bit of style (mainly through the opening credits), but there's something missing from the story. I guess I was expecting some sort of emotion or something, but something more interesting and entertaining would have done. Maybe the film should have been all about Rourke and Gordon-Levitt and just left Thomas Jane and Diane Lane as side characters. That would have been much more fascinating, and probably more entertaining as well. But this movie is still worth a watch, even if the studio doesn't think so.

For Wednesday: An article about Predator; the politics of it (both metaphorical and actual) and the sheer manliness of it.
Posted by Eric Harris at 12:12 AM