The Power of the Director's Cut: "Kingdom of Heaven" 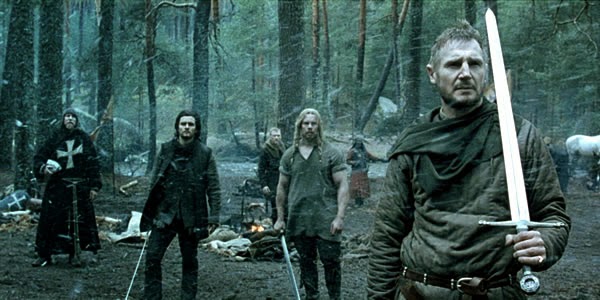 This week’s article is about the director’s cut of the crusades movie, Kingdom of Heaven. This is not going to be a comparison of the director’s cut to the theatrical cut, so I pretty much have to include SPOILERS throughout. I’m going to write about the additional scenes and how they relate to the overall story so if you haven’t seen both cuts or at least the director’s cut, I advise you to do so before you read any further (both versions are available on Netflix).

I recently re-watched Kingdom of Heaven and felt the need to write about the awful situation Ridley Scott was put in upon this film’s initial release. Scott, no stranger to studio interference (Blade Runner), released Kingdom of Heaven in 2005 to a mixed critical reaction and a mediocre domestic box office gross ($47 million total, though it did end up with a profit after $164 million foreign). The studio basically forced him to cut it down as short as possible while keeping every bit of action intact, even if it meant the story had to be sacrificed. I liked the movie when I saw it in the theater, but I did have my problems with it. Some characters needed to be fleshed out and even at 144 minutes, it seemed rushed. Plenty of great Ridley Scott action, though. If you’ve seen Gladiator then you know that Mr. Scott enjoys spurts and fountains of blood, miserable arrow deaths, and he loves to add sprays of dirt into battle scenes. So you get all of that alongside a wonderful cast, some amazing visuals, and the main idea about war over religion is still maintained, though it’s told a bit more poetically in the director’s cut.

Now on to the changes. The first, and most important, addition to the film involves Sibylla’s (Eva Green) son. In the theatrical cut, he does not exist. I recall walking out of the theatre four years ago wondering why Sibylla went so damn crazy near the end. So Balian (Orlando Bloom) didn’t marry her and her estranged husband Guy de Lusignan (played deviously by Martin Csokas) got to be king of Jerusalem. Yeah, that kind of sucks since he is a bloodthirsty moron destined to ruin the peace that her brother, Baldwin IV (the leper king, voiced by Edward Norton doing a Marlon Brando impression) created. I understand she might feel a little responsible since she had to give Guy the crown, but why did she have to shave her head and turn into a recluse for the last half hour of the movie? I finally got my answer when I saw the director’s cut. She had a son who started to show symptoms of leprosy after he was crowned king. Rather than put him
through a life like that of her tortured brother, she decided to kill him. Now that is certainly a reason to go a bit crazy for awhile.

Sibylla is not the only character that gets more attention. I had a problem with Balian’s character in the first cut. I don’t mind Bloom’s performance (though many hate it), but I didn’t like the fact that he’s a blacksmith in France, but when he gets to Jerusalem he’s some kind of genius when it comes to siege warfare. In the new cut, though, there is a simple, short sequence of dialogue in which we learn that Balian has designed siege warfare devices and been at war before. Why those thirty seconds had to be cut is beyond me. One more addition that is notable: Balian kills a local priest near the beginning, which gives him reason to flee along with his father, Godfrey (Liam Neeson, in yet another doomed mentor role). It is certainly understandable for Balian to go into a rage since the priest took a necklace from Balian’s wife’s dead body. But it still seemed to be a bit of an overreaction (wouldn’t a simple beat down have sufficed?). In the new cut, we find out that the priest is Balian’s brother and there is even a scene with him hitting Balian, telling him that he never fights back.

Godfrey’s crew gets a few more scenes as well, but it’s the Hospitaler (David Thewlis, in one of his three roles that ends in decapitation) who becomes very interesting. A new scene involving a burning bush and the Hospitaler disappearing in the middle of the desert hints at a deeper religious plot. He was already something of a guide to Balian, but when you add the mystical elements to his character, it opens up much more discussion about the role of religion in the film.

There are more differences, but those mentioned above are the most important in my opinion (check Wikipedia for every single difference). But almost all of the changes turn this once decent movie into something amazingly epic. I am not a fan of every change, though. The overture and entr’acte music scenes may add a bit of an old school epic feel, but I found them pointless. And the music in general seems a bit out place at times in the new cut, but that’s a very small complaint when compared to everything this film accomplishes.

I don’t want to make this a full blown review or anything, but I do want to mention a few more things I like about this movie and acknowledge some issues I’ve read that people have with the film. First, this film looks great. Scott creates so many amazing shots (both practical and CG) on the battlefield. There are some things done with the color and amount of sunlight when Saladin and Baldwin IV meet that adds something that might normally be a plain scene. I’m also a big fan of Scott’s use of blood. That might sound stupid or childish, but I think that Scott uses gore a bit more artistically than one might assume. When Guy slashes in battle and his crazed face is covered in blood that shows us the extent of his bloodlust. It’s not about the gore. Well, not completely, anyway. It also says a bit about the character, not to mention the effect it has in showing the brutality of war. I also have to mention that I love any movie in which people yell out, “Blasphemy!” and “God wills it!” Not sure, why, but when the term “God wills it” is used to promote death and violence, it makes me laugh.

The only issue I want to cover concerning negative reactions to the movie is the idea that this is an anti-Christian film. Aside from the obvious fact that the Hospitaler becomes a Christ-like character in the new cut, there are many other instances that show that this movie’s message isn’t about the Christians being evil and wrong, while the Muslims are good and noble. There are plenty of examples to demonize and glorify each side. The Muslims are quite violent and are shown to be merciless at times. Christians are shown in the same light, though there is more

focus on the negative aspects of Christian soldiers, but that is simply historically correct as far as the Crusades go. The Christians did show up and start killing people in God’s name without showing much mercy. And Saladin really did let the Christians of Jerusalem go free (though some had to pay) when he took back the city. So maybe Scott is against Christianity because of the historical story he wanted to tell, but I don’t think that’s the point. The point of this film, to me, is that killing in the name of religion is ridiculous. But since it’s told from the Christian perspective, it’s going to contain more villainous Christian characters. And maybe that line at the end about war in the Middle East still going on is a bit heavy handed, but it does bring up the issue of religion and war and how no one has really learned any lessons from it yet.

Are many of these ideas evident in the theatrical cut? Sure, but the power of the director’s cut is that it turns Kingdom of Heaven into a better movie, which means any ideas presented by it are a bit more legitimate.
Posted by Eric Harris at 12:25 AM