The Evil Kurgan only wants violence and action...and this movie has both in droves. 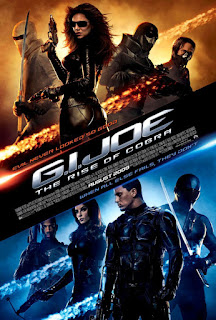 G.I. JOE: The Rise of the Cobra is one of the last big budget action movies of the summer and, if not taken seriously, can be quite enjoyable. The biggest part of the movie you should not take seriously is the plot. This is a movie based on a toy, after all. I don't want to go into pointless detail about the plot, so I'll keep it short. A new weapon technology ("nanomites," or little metal bugs that can destroy anything, much like in the recent The Day the Earth Stood Still remake) have been introduced to the world and two rival groups start to fight over their possession. Now add about $170 million in real and CG explosions and you have G.I. JOE.

I tried to keep my head out of this movie as much as possible because I went to see it just for the action. But I couldn't help but notice a few times that the future that this film takes place in is quite miserable and maybe not worth saving, even though all the characters seem oblivious to this. War is constant (which is true today), but it's less distinguishable who is fighting who. The soldiers of G.I. JOE certainly have an American swagger, but many of them are from different countries, making them more of a United Nations strike force. The war may be everlasting and ambiguous, but that hasn't stopped these future scientists from working hard on holograms. In the first twenty minutes of the film, it seems like every other character is being projected by hologram, a gimmick that grew pointless very quickly. I suppose that describes the world of this film the best: misery and death overshadowed by ambitious technology. I stopped thinking like this early on, though, because ninjas were fighting onscreen.

This brings me to the action. Director Stephen Sommers (The Mummy, Van Helsing) has found the best formula for the summer action movie: when the story becomes complicated or ridiculous, amp up the action. It worked for me. Anytime I was wondering why McCullen (aka Destro) had

such a byzantine plan, there would be a fight scene between Snake Eyes and Storm Shadow (two ninjas who have been fighting each other since childhood). That was all I needed to forget about the problems with the story. The action is pretty good, for the most part. It's hectic, but it's not so fast that you can't tell what's going on. The CG (which I was worried about based on the previews) turned out to be decent, though some of the underwater battles and accelerator suit stuff looked goofy at times. I feel the need to point out that even though this movie is based on a series of toys, that doesn't mean it's aimed at small children. I thought a lot of the violence was pushing the rated R level; people getting stabbed in the face, heads exploding, and a huge body count.

The action is the main aspect of this film, but the filmmakers explored two other elements that helped this film out immensely. First, they made this a true ensemble film. No one character really stands out as the star. Sure, you have the notable characters of Duke, General Hawk, Cobra Commander, Ripcord, Baroness, etc. But I wouldn't say that any of them get much more screen time than the other. That is a blessing, since these characters would probably become annoying if in large doses. They are all one-note, but since they are all different notes, it balances out. The second element that makes this movie stand out is that they actually focused on character development. It's not profound or anything, but it was interesting to see a movie like this go to flashbacks from multiple perspectives to explain why some of these characters are holding grudges against each other. This makes the action mean something for a change. The ninja showdown is still cool even if I have no idea why they hate each other, but it's much better and I actually care who wins when I get information about each fighter through flashbacks.

I mentioned the ensemble aspect, so I should mention the actors as well. Actors in a movie like this really only need to make sure that they do not end up as jokes. I wasn't blown away by any of them, but none of the actors did a particularly bad job, either. The brightest point of the cast is Joseph Gordon-Levitt, who gets to ham it up with a great evil voice as Cobra Commander (I'm willing to bet that behind that oxygen mask, he had a huge smile on his face the whole time). The low point is Christopher Eccleston as Destro, but that's only because I found him annoying as the villain in the Gone in 60 Seconds remake, and he's playing pretty much the same character in this.

I haven't made any comparisons to the toys themselves or the cartoon series throughout this review because I didn't want to turn this into a fanboy comparison/rant and I was never a fan of the cartoon or toys anyway (I was a Teenage Mutant Ninja Turtles fan). But I did notice a few references for the fans that even I understood, like the mention of a "kung fu grip" and the line, "knowing is half the battle." I did watch this with someone who grew up with the toys and the cartoon and he seemed okay with the movie, though I'm sure there are some fanboys and "purists" out there who are busy denouncing this movie as a travesty on the internet message boards as you read this.

All in all, G.I. JOE is a fast paced action film that doesn't try to make a statement about war (if anything it glorifies it) and certainly tries to stay away from commentary on America, since the soldiers do not necessarily represent the USA in the film. In fact, if they had been completely American, this would have seemed like the live action version of Team America: World Police. It still kind of is, but that's not really a bad thing if you're in the mood for an action movie. And that's what G.I. JOE is: an unapologetic futuristic war movie that never lets you catch your breath, and that's fine by me.
Posted by Eric Harris at 10:07 PM