Dark, messed up, and quite funny, just like Chigurh


I feel like a real critic; I was able to watch this movie before it comes out in theaters. Granted, I watched through Amazon On Demand and it doesn't look like it's going to get a very wide release, but I still feel special. I will say this, though, this movie deserves a wide audience because it is funny and it has dramatic elements that feel real...dark, but real.

I can't say exactly what makes World's Greatest Dad dark because that would truly spoil quite a shocking element a half hour or so in and I wouldn't want to deprive anyone of that. So I'm going 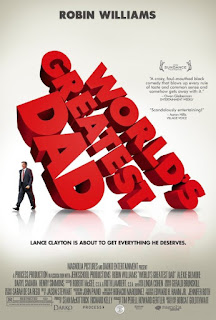 to be very vague for the first part of this review, then I'll get into spoilers so I can say what I really felt about it.

I'm usually not a fan of Robin Williams. I've never found his normal comedic performances to be very funny. I like a few of his movies, don't get me wrong, but lately he's come off as more annoying than funny. That said, I have enjoyed his dark turns here and there (Death to Smoochy and Insomnia). This role requires both darkness and comedy.

Williams plays Lance Clayton, a failed author who has settled for a career teaching an extremely unpopular high school poetry class. To top it off, his son, Kyle (Sabara, aka the kid from Spy Kids), is an extreme pervert who seems to hate everyone, especially his dad. That's about as far as I can get into the plot without ruining it, so I'll just keep on with my mysterious review for now.

Without getting into it, this movie is hilarious at times. Williams always works best (in my opinion) when his vocabulary is free and he is able to play a role in which he says hateful things to a family member. My favorite interaction (from the trailer) involves a neighbor saying Kyle is like a zombie, to which Williams replies, "I wish. I like zombies." His delivery is perfect in that line and throughout. He truly conveys a defeated man who has given up playing the "happy" dad character. But he still tries at times, which makes him a sympathetic character. Kyle is so hateful and spoiled, but Williams still tries to win his love, all to no avail.

Adding to the misery is his secret girlfriend Claire (Gilmore), a fellow teacher who wants to keep out of the public eye, who starts to take a liking to the more popular creative writing teacher at school (she even goes out in public with him. The most heartbreaking moment occurs when Lance is eating lunch at the mall with his son. He looks at the escalator and sees Claire laughing it up with the other teacher. Then his son ditches him to go try out a new computer with his only friend rather than going to the movies with Lance. Kyle's friend asks Lance what he's going to do when they leave. He sighs and tells him that he'll probably just go to the movies by himself. At this point, my heart is going out to Williams. I've always felt bad for the people I see in the theater sitting by themselves. I start to wonder if they have no friends, and if they do, why wouldn't their friends take the time to check out a movie with them? It's depressing. That's probably not the case with all lone theatergoers, but it's certainly the case with Williams in this situation and it really struck me as realistic and sad. But that's all I can say about that without getting into spoilers. So, from here on out...SPOILERS.

Things change for Lance shortly after the low point at the movies. His son, who he had caught masturbating while choking himself earlier in the film, accidentally kills himself during the act. Lance, not wanting his son to be remembered for such an act (and probably not wanting the embarrassment for himself), gets ride of the evidence, hangs his son's corpse in the closet, and writes a touching suicide note. This turns out to be the best thing that ever happened to him (hence the darkness I mentioned earlier). The note gets published, along with "Kyle's" journal, and Lance is suddenly riding high. His class is now popular, publishers are talking to him, and all the kids at school, who used to shun and downright hate Kyle, embrace Kyle's legacy and talk about how close they were to him.

This is what makes this film really interesting. Not only is the death and subsequent good fortune quite an original shock, it also makes you genuinely question whether or not Lance has made an immoral choice. Students are telling him how their lives have changed, a school psychiatrist thinks the writing has saved other students, and things are going great for everyone in general. Is a lie evil when so much good comes of it? That is the question that the bulk of the movie deals with, and it's a thought provoking one at that. After 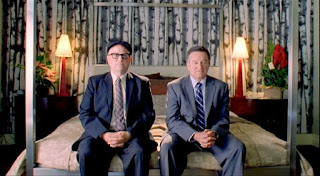 watching the film, I still cannot say which way I lean regarding Lance's lie. I can tell you one thing, though: the movie isn't afraid of staying with the humor after this questionable choice is made, and I applaud Bobcat Goldthwait for that.

Goldthwait's recent directorial effort, Stay (or Sleeping Dogs Lie) was certainly edgy, but it didn't strike me as funny or dramatic. He seems to have found his mark with this one. Goldthwait's writing is great, and he's showing promise as a filmmaker as well. There are a few interesting shots here and there, and the man knows how to pick a good song to set a montage to. Sure, he might enjoy the montages a bit too much (I think there are about four of them), but they weren't really unnecessary, they just bordered on redundancy. Hopefully this film will keep him in business as a director, because I think he's capable of getting better.

World's Greatest Dad probably isn't for everyone (some may become disgusted early on and simply turn it off), but if you're into original films and you're willing to laugh when you should be shocked and disgusted, you should have a great time with this. I know I did.
Posted by Eric Harris at 9:46 PM