The evil Kurgan would've rather watched a comedy, but he'll settle for this dramedy. 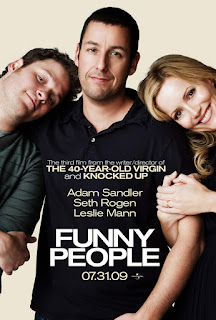 Funny People, marketed as an Adam Sandler comedy "from the same director that brought you Knocked Up and The Forty-Year Old Virgin, is more of a drama than knee slapping comedy. That doesn't mean it's a bad movie. It just means that if you are going into this film expecting to laugh throughout the 146-minute runtime, then you are going to be very disappointed (as a few audience members at the showing I went to were). I can't really fault the movie for taking a serious tone, but I can fault the movie studio for trying to sell this as a complete comedy. Once I got past the idea that I was not supposed to laughing, I started to enjoy this heartfelt film.

The movie is about George Simmons (Sandler), a lonely comedian/movie star who finds out he is dying. George decides to start doing stand up comedy before he dies and he comes across a young talent, Ira (Seth Rogen), who he hires to write jokes, fetch Diet Cokes, drive him around, and talk him to sleep. Usually dying people does not equal comedy, and that doesn't change with this film. There are some depressing moments in this film as we see George undergo treatments and tests while trying to keep his disease a secret.

It's not all misery and death, though. This is still a movie about comedians. I'm particular about stand up comedy and I usually don't enjoy it, but some of the routines are quite funny in this. But fair warning: this film is rated R for a reason and all of the stand up jokes and pretty much every comedic element in the film is extremely dirty stuff. This is what makes the film a bit strange. One second you have a touching moment between George and his long lost love (Leslie Mann), the next there's a comedic bit about male reproductive organs (which is the movie's go to subject for comedy). I suppose this combination of R-rated comedy and straight forward drama worked for me, but I think it works only because of the characters and the actors.

Every character in this film is surprisingly realistic. George is not exactly a likable guy, but he's not over the top in his selfishness. Sandler does an excellent job of conveying misery in this film and he really proves that he's capable of being a dramatic actor (which I completely support, if Zohan is his idea of being funny). Seth Rogen continues to impress and it's great to see him play a character like Ira, who is gullible, friendly, and easily impressed, which is much different than Rogen's usually sarcastic and cynical characters. The supporting cast provides plenty of laughs. Jonah Hill is on familiar ground, but he's still funny. Jason Schwartzman is funny as a slightly famous 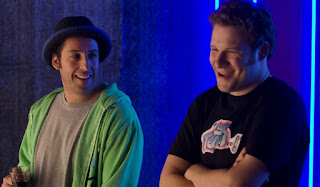 sitcom star. Eric Bana has a few moments as an excitable Australian. And the celebrity cameos provide plenty of laughs from the likes of Andy Dick, Eminem, Ray Romano, Sarah Silverman, etc.

The laughs provided from the supporting cast are few and far between. But I think that the interactions between Sandler and Rogen make up for it. I was interested in how things would end up for everyone involved. If that interest isn't there, however, then you're going to find yourself yawning. This is quite a lengthy movie and even though it held my interest, I still felt that it was about twenty minutes too long. I've had this problem with other Apatow films as well. The man needs to learn how to trim the fat in the editing room.

Funny People isn't always funny (which is the ironic joke of the title), but it has realistic characters in serious, dramatic situations. That might not sound like what's expected in an Apatow movie, but if you can get past your expectations, and have a bit of patience, then you should enjoy this.

*I want to get into a SPOILER element that has been bothering me ever since I saw the first full trailer for this film. The trailer reveals that Adam Sandler's character gets better. At the time, I read that that wasn't exactly a spoiler and it happens relatively early in the film. While it's certainly not something that happens at the end of the film, I still think it was a bit ridiculous that they would put that plot element in the previews. I didn't check my watch or anything, but it seemed 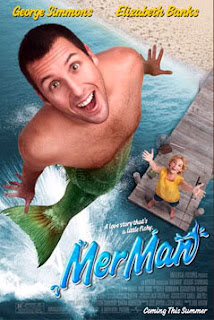 like Sandler's character didn't get better until the second half of the movie. But I watched for an hour or so just waiting for him to get better. I think that the dying plot element would have worked much better if I had gone into the movie thinking the entire film was about his struggle, then be surprised when he gets better and the movie keeps going. Maybe it's not a big deal, but I thought it was a mistake to give so much away in the preview for this.
I wanted to write a bit more about Sandler's character, well, his character's career, anyway. George makes idiotic movies like Merman, Re-do, My Best Friend Is a Robot, etc. I thought the posters were kind of funny, but I expected the clips they show in the movie to be funnier, but they all fell a little flat. Maybe it's because they all look like films that Sandler might actually make. I expected bigger laughs from the fake movies, though.
Oh, and I forgot to mention the other supporting stars of this film: T-shirts. It seems like every character in this film has an extensive collection of T-shirts referencing comedy, music, film, etc. and each shirt is featured prominently. Not a complaint or anything, it's just something that stuck out to me. Maybe it was because each T-shirt looked brand new. I don't know.
Posted by Eric Harris at 8:47 PM