Who better to represent a tense movie than Anton Chigurh? 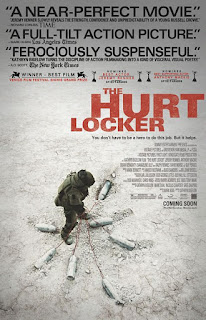 The Hurt Locker finally came out relatively close to Cannelton (about an hour and a half away) so here's a review for a movie that's been released theatrically for over two months now.
The Hurt Locker, simply put, is a great film. Based in Iraq in 2004 (though I've read that the year is only listed on some prints, not all, I'll get into why that's important later), The Hurt Locker follows a bomb disposal unit during it's last forty days in rotation. Armed with that knowledge, one might assume that the movie is one typical bomb disposal scene to another featuring lines like, "Which wire do I cut?" and "It's gonna blow!!!" But this movie turns those Hollywood staples on their head and creates countless nerve wracking, realistic scenes.
The film starts with the unit following protocol, using a robot to get close to an IED (improvised explosive device) and take care of it via remote control. It's a tense scene and it sets the tone and style for the entire movie, but I don't want to watch a movie about bomb disposing robots. Enter Jeremy Renner as new team leader Staff Sgt. James. When out on his first call with Sgt. Sanborn (Mackie) and Spc. Eldridge (Geraghty), James tells them to leave the robot and help him put on the blast suit. He then strolls off at a leisurely pace, stops to back off a brave cabbie at gunpoint, then finds the bomb and disarms it without seeming to give a second thought about it. Sgt. James never looks like he is unsure which wire to cut, he only seems to be looking for the right wire. From the get go, you can tell he either has a death wish or an addiction to adrenaline...or both. Either way, Sanborn and Eldridge aren't too happy about it and that leads to some entertaining and tense interactions with them throughout.
The seeming ease of the first disposal doesn't mean that everything is a walk in the park. There are different circumstances and locales during the film and it always stays fresh. I don't want to give away details, but let's just say you won't be bored, you might be disgusted once or twice, but boredom won't factor in, trust me.
A movie in which any character could die at any minute is only as good as its characters and that's what makes this film stand out. The three main soldiers are not mindless, bland grunts. They are characters. I already mentioned James and his need for a rush or death. Tie that in with his interactions with the team and you have a realistic character on your hands. Sanborn tries to be the sane, balanced character of the group, constantly arguing with James about procedure and risking all their lives, but he has more going on than that. He has ambitions and he certainly want to survive. And then there's Eldridge, by far the most troubled of the group. 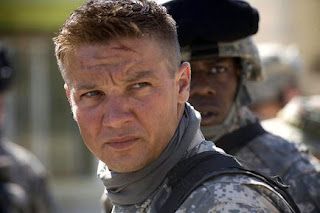 He has "sessions" with a base doctor about how scared he is of death. So you know, since this is a war film, that he's going to have to deal with that fear quite regularly. Throw these three guys together and the film writes itself.
The other factor that raises this film from the good category into greatness is director Kathryn Bigelow (Point Break, Strange Days). She creates tension as well as any director out there. I know I may sound like a broken record with all this tension and nerve talk since that was a focus of my review of Inglourious Basterds, but I cannot help it. It just so happens that the last two films I've seen are filled with amazingly tense moments. With The Hurt Locker, it's more than just the possibility of an instant explosion (don't get me wrong, that tension is obviously there), it's also the setting. IEDs can be hidden under any pile of trash so when Sgt. James is walking in a garbage strewn street, it might as well be a minefield, and Bigelow frames to shot to show it as such. The director also knows when to cut to the many bystanders during each disposal scene. In the Iraq setting, who can tell the difference between an innocent onlooker and a terrorist, especially when normal devices like cell phones can be used to detonate the bomb? Bigelow uses all of these elements to eat at the nerves of the viewer. She also films explosions quite well, showing the gritty details without making it seem gratuitous.
I want to mention a few minor details regarding the year of the film before I wrap up. As I wrote above, the version I saw set the movie in 2004. But I have read on message boards that the version people saw in Canada and New York did not have the year at the beginning. Some have claimed that setting the movie five years in the past somehow lessens the political aspect of the film. If it's about the past, then it's not a comment on the war right now or 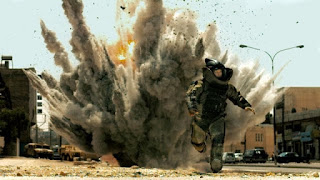 something. If that's the case I don't think it works, especially since the movie ignores political views. There are no questions about whether or not the war is justified, there's only the theme (mentioned in the opening line) that war is like a drug. Apply whatever political meaning you want out of that idea; the point is the film itself doesn't make any decisions for you. Political or not, the year is an issue and I do believe was added by the studio because it creates a few mistakes. First off, a soldier mentions youtube, which wasn't around until 2005 (I know, I know, I thought it had been around longer myself, but I looked it up: February 2005). Secondly, a soldier is seen playing the Xbox 360 game "Gears of War" which wasn't released until 2006. To be honest, none of this occurred to me while I was watching the film, but I know that stuff like that bothers some people, so just know that the year may have been a late addition by the studio.
All of that political/what year crap aside, this is a film worth watching and if it does get some nominations (hopefully for director, actor, and picture) it certainly deserves them. I want to point out, though, that depressing and tense though the film may be, it is also quite entertaining. There is plenty of action aside from bomb disposal (I thought the sniper scene was great) and the cameos from David Morse and Ralph Fiennes are a lot of fun. If The Hurt Locker makes its way to a theater near you, check it out. If not, at least check it out on DVD, you won't be sorry.
Posted by Eric Harris at 7:42 PM