Ahh...Finally some good suspense in a film this year.

I am a complete sucker for tension and suspense in films. I find a 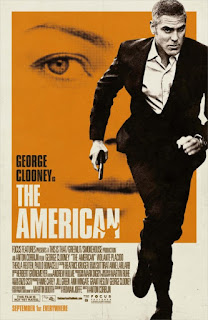 film at its most powerful when a character that is realistic, deep, and even a little likable gets put in multiple situations in which you wonder if he is going to live or die. The American is like that from start to finish. I was completely engrossed from the very first scene and the film never let up.
The American is about a hit man, Jack (George Clooney), lying low in a small town in Italy. He takes on a job there and is told that he doesn’t "even have to pull the trigger.” That pretty much sums up the movie as far as action is concerned. Those expecting a flat out action movie will be severely disappointed. This film is actually a character study…about a hit man. So there is a little bit of action, but it’s really all about Jack.
Jack is dead inside. He’s at the tail end of a career in death and it is obvious. Well, it’s obvious because of Clooney’s performance. This is a role that requires an actor who can talk to the audience without ever speaking. I’ve always found Clooney to be excellent at conveying complex emotions simply by staring, and he’s in top form here. One look at Clooney and you know this is a defeated, yet hopeful man. This is helped by his character’s fascination with butterflies (he even has one tattooed between his shoulder blades). You get the idea that Jack may be a caterpillar waiting for something to happen so he can flourish into a real life.
The only way to become a butterfly is through a woman, though. This is a problem since a hit man’s lifestyle isn’t very conducive for long term relationships. It doesn’t help that his handler thinks that women represent weakness and a loss of “edge,” but for Jack, they represent life. So yeah, this is kind of a love story. But it’s a love story in which you never know who anyone truly is.
By that I mean that this is a film that will have you looking at every single character (including Jack) with complete suspicion. It’s been a while since I’ve seen a film that has created paranoia so effectively. This is nothing new in the “hit man” genre, but it is handled so expertly. Director Anton Corbijn (Control) does an amazing job of putting the viewer into Jack’s shoes. You get the feeling an aged hit man most likely has: that anyone could be a potential assassin. I, like Jack, didn’t trust anyone. It’s an anxious feeling to have while watching a film, but it’s also really great.
A good location can help set up suspense as well, and a small town in Italy is perfect for this film. The American takes place in one of those nondescript old towns of Italy in which the sidewalks and roads are basically a labyrinth…which is also an ideal place to put a hit out. Imagine this: the camera follows directly behind Clooney as he walks down an empty sidewalk at night, the soundtrack nonexistent so all that you hear are footsteps, but are his footsteps the only ones you hear? That just wouldn’t work as well on a common American street. On top of that, at one point Clooney is watching Once Upon a Time in the West in a bar along these streets. How fitting is it that his character is watching one of the most suspenseful (Italian-made) westerns of all time in this film? All I can say is that the connection was not lost on me.
Corbijn also used Italy to its fullest extent as a visual backdrop. There are plenty of beautiful shots in this film and the film in general is shot very well. The few action scenes are handled very tastefully. That is to say, The American isn’t about violence and bloodshed, but when it is required the film treats it realistically and effectively.
Another impressive aspect of this film is the crawling pace of it. I know that many people will call it boring and maybe even pointless in its pace, but I think that is what makes this film so great and suspenseful. The American is about a man who is thinking deeply about his life throughout. A film like this must move slowly, though deliberately. So that means you will see very long establishing shots and you will see many scenes that simply show Clooney working on a gun or just staring into space. That kind of thing isn’t for everyone, but if you have the patience for a film like this, it can be very rewarding.
I mentioned that the film moved deliberately, but it is also very deliberate in what it shows. This film can be confusing in that it doesn’t tell the audience everything, but everything that it does show the audience has a purpose and there are no loose ends. But it is a still a very mysterious film that requires you to fill in the blanks yourself at times. I appreciate a film that has that kind of confidence in its audience.
When you boil it all down, all I’m saying is that The American is a film for adults. It has action, but it is not an action movie. It is visually appealing, but not with computer effects. It has an interesting main character, but he does not talk very much. It moves at just the right pace, but some will find it boring and slow. I think viewers of an older age will enjoy this much more than the younger crowd. But it really ends up being about your film age. Do you like to think while you watch a movie? Do you like to feel real, meticulous tension? Do you want to see a realistic character whose eyes tell more of a story than his mouth? If not, avoid this film. If so, check this out now.

Random Thoughts (SPOILERS)
I thought the picnic scene was awesome. It was handled well enough that it crossed my mind that Jack might actually be a prostitute murderer. He read that headline earlier and he had such a strange look on his face at the river that it had me wondering, "Where is this movie going?" I mean that in a good way. I know it's dumb to think the movie might have gone that way, but you have to admit, it would be quite the original move if it had worked out that way.
I find it completely odd that this slow, tense film was released wide at all, much less on a Wednesday. Don't get me wrong, I'm very happy that this was released in my area, but this is not a typical studio film at all. it honestly feels like a foreign film...which makes sense I guess since Clooney is damn near the only American thing about this movie.
The gun suppressor sequence was actually quite cool. I enjoyed seeing the process of something like that being made. In fact, the way the movie shows the planning and meticulous detail to something as quick and violent as an assassination was quite refreshing. Usually in a movie if someone needs a gun they make a call and they have a highly illegal weapon in minutes.
Violente Placido is absolutely beautiful.
It was a bit cold how Clooney distracted his lady at the beginning of the film before he killed her, but it was effective. A great example of how cold blooded he has to be because of his job. He could have no loose ends.
I didn't mention any of the scenes with the priest in the review, but I very much enjoyed all of the discussions, thinly veiled as they were. I know that a hit man with a conscience isn't new, but that doesn't mean it can't be handled well. Point is, I found it decently compelling.
Posted by Eric Harris at 10:46 PM