The Kurgan's okay with checking out a borderline girly movie. If you give him crap about it, he'll disembowel you. 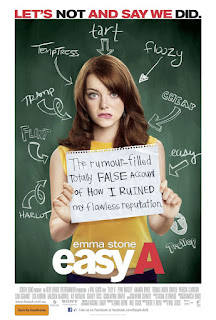 came across news about it. The connection to “The Scarlet Letter” was interesting (mainly because I am an English teacher), but aside from that it looked like a movie for young high school girls. Well, it kind of is, but it’s much smarter than your typical teen movie. The added intelligence and witty script also means that this is not just for high school girls (at least I keep telling myself that). This is a film for an audience that likes to think and laugh, but there’s also enough stuff here for the brainless laughers as well.
I won’t waste time giving a synopsis of “The Scarlet Letter” because the movie does that for you (along with clips from the original film version of the novel). Easy A is just as inspired by John Hughes movies as it is by the fiction of Nathaniel Hawthorne. In fact, I would say that those well versed in the Hughesverse will have much more fun with this film than Hawthorne enthusiasts (if they exist, that is). This movie strives to be its own entry along with classics like Ferris Bueller’s Day Off and The Breakfast Club. Time will tell if it succeeds, but regardless of the film’s “classic” status, it is still a very enjoyable experience and a refreshing one at that.
Easy A stars Emma Stone as Olive, a nearly invisible high school student who inadvertently starts the rumor that she lost her virginity. She gains instant popularity, much to her enjoyment. A strange feeling of quasi-nobility prompts her to stage a very public and very fake sexual encounter with a gay classmate. He gets to appear straight so people will leave him alone. She gets more popularity as the school slut. Things take off from there and, as you can probably imagine, spiral out of control.
The fake sex scene is one of the examples of brainless laughter and it is very funny. But the lasting comedy of the movie comes from Bert V. Royal’s smart script. There are doses of clever conversation and non sequiturs throughout. Olive spouts off clever lines so quickly that some of them might go over your head. But if you have a keen ear you’ll pick up on some great lines that include references to Sylvia Plath’s suicide and Kinsey’s scale of sexual orientation.
The non sequiturs come from Thomas Haden Church, who co-stars as Mr. Griffith, the English teacher who introduces Olive to “The Scarlet Letter.” All of his random lines cracked me up. Church is perfect for delivering lines like, “Remember tomorrow is Earth Day,” completely out of the blue after a long silence. I know it doesn’t sound funny when you simply read it, but trust me, it works on the screen.
Quick witted teenagers and random dialogue may have you thinking of another recent high school movie: Juno. I did not care for that film because of the dialogue. It sounded too unrealistic and just plain stupid. Well, Easy A certainly isn’t realistic, but it doesn’t sound stupid. The dialogue isn’t funny because it’s made up and new; it’s funny because the language is played with and the references are smart.
The dialogue works thanks to Emma Stone’s delivery, as well. Her smoky voice adds a level of maturity to her character (the film also makes a funny crack at how unnatural her voice might seem) and it makes it easier to believe that she could actually come up with most of the stuff she says.
The main evidence for Olive’s intelligence, though, comes from her parents, played by Stanley Tucci and Patricia Clarkson. They are both as impossibly witty and clever as Olive and they are even funnier. Sure, no one actually talks like these people, but who wants realistic family dialogue in a movie like this? I know I don’t.
The movie is not perfect or anything, though. Olive’s motives do not necessarily make sense and the school’s reaction to the idea of her having sex was a bit ridiculous. We live in a country in which high school pregnancy is relatively common; it seems a bit crazy to think an entire school would freak out over the possibility of one unpopular student losing her virginity.
Christianity’s portrayal in Easy A could possibly rub people the wrong way as well. A group of Christian students come across as completely psychotic throughout the film. To be fair, they are meant to be viewed as extremists, but there isn’t a normal Christian character portrayed to counter the psychos. Although one could argue that Olive redeems the idea of faith at one point in the film, but it doesn’t really balance out the portrayal.
The whole faith issue didn’t bother me, though; I’m just putting it out there as a fair warning. I actually found it all quite innocent, but then again I’m not easily offended. Point being this film is not for everyone, but it’s not only for a select group like high school girls, either. If you want to laugh at some slightly raunchy sex humor, or laugh at surprisingly quick and smart dialogue, or reminisce about the heyday of John Hughes, etc. then by all means, watch Easy A.

Random Thoughts
Lisa Kudrow was decent in this. She usually annoys the hell out of me, but I didn't mind her as the guidance counselor in this film.
Malcolm McDowell had a funny scene early in the film. I was hoping for more, but his character simply doesn't factor in the story enough to warrant more scenes.
The recurring Mark Twain joke was great.
The opening credits were cleverly placed, especially the way Emma Stone's name was listed in the "And" credit as she narrates about being forgotten and insignificant.
Posted by Eric Harris at 3:28 PM