First off, I know it's been a couple weeks, but I've been a bit busy and couldn't make it to the theatre last weekend. I plan on making it up in the next few days. Along with The Town I will also be posting reviews of My Son, My Son, What Have Ye Done and Easy A later in the week.

The Town, based on the very enjoyable novel “Prince of 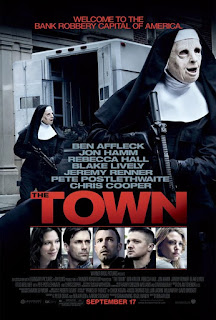 Thieves” by Chuck Hogan, is a film about Boston. More specifically, it’s about a part of Boston called Charlestown. Much like Mystic River and Gone Baby Gone the city itself is a character. Ben Affleck (who co-writes, directs, and stars) has done a fine job of incorporating the city into the film. I found his ability to place the viewer into a scene much more impressive, though.
Charlestown, the film claims, contains the most armored car/bank robbers per capita in the United States. Affleck portrays Doug MacRay, leader of a crew of robbers. The gang seems to doing well, though Doug is on a different track than his cohort Jem (Jeremy Renner). Doug is ready to cash out and Jem is ready to step up to the big leagues and start working directly under the local gangster. Things get much more complicated when Doug starts dating a witness from their last robbery who could possibly identify Jem to the FBI.
The story is interesting enough, especially since it’s one of those movies in which the “good” and “bad” guy roles are reversed with the robber in the sympathetic light. The relationship aspect is what makes it a bit more fascinating because the set up allows for instant tension. The first date scene between Doug and the witness, Claire (Rebecca Hall), is quite good. Imagine the victim (she witnessed the brutal beating of a co-worker during the robbery) relating the story of being taken hostage to one of the men who took her. Strangely enough, I found myself hoping things would work out between them even though the entire relationship is based on a falsehood of epic proportions.
The Town contains enough dating scenes to consider this a romantic action film. That’s not a bad thing, really. I consider this to be one of those rare films for adults that has a little something for everyone. On the action side, Affleck films shootouts and heists serviceably with a bit of creativity here and there. I particularly liked his transitions from security camera footage into the actual scene. And there are some very effective and brutal scenes near the end that stuck with me.
The most impressive sequence in the film, however, was a twenty second scene in slow motion and almost completely muted. I don’t want to spoil it or anything, suffice it to say that it’s a scene in which MacRay feels like his world is about to collapse and it was filmed and edited in such a way that I knew exactly how he felt.
That scene may have only been impressive to me because I have read the book. Affleck completely captured that scene exactly as I imagined it. I don’t want to spend much time on a book comparison, I’ll just say that the film represents the book quite well and the change to the ending was interesting.
Of course, capturing a moment and placing the viewer in a character’s shoes is only as interesting as the performance. Affleck plays MacRay with a sincere intensity that I completely bought. Renner played the barely restrained psycho effectively and the two had plenty of good scenes together. I also enjoyed Chris Cooper’s small role as MacRay’s father. He only had one short scene, but it was a powerful one. Along those lines, I enjoyed Pete Postlethwaite as the aging gangster in Charlestown. The only one left with little to do is Jon Hamm. I would like to see the “Mad Men” star crossover into the movies a bit more, but he just isn’t given anything to do here. He is believable as the driven FBI agent, but he’s just bland. I was hoping for a showdown along the lines of Pacino and De Niro in Heat, but this film did not have anywhere near the payoff that that film had. It seemed like that role could have gone to anyone.
The weak FBI character isn’t the only issue with the film. It seemed that too many scenes were shot with the talking character with his/her back to the camera. I think it had something to do with the looping of the dialogue, which is a pet peeve of mine. No big deal, it just made the film look a little sloppy here and there.
Small nitpicks aside, The Town is a very good film that places you right in Charlestown. It moves at steady pace and never gets boring. It looks like Affleck is coming into his own as a filmmaker. I can’t wait to see what’s next.

Random Thoughts (SPOILERS for both book and film)
Jon Hamm's FBI agent could've been more interesting...if they had stuck with the book. Frawley in the book is a rival suitor for Claire and is more than just his job. Sure, this would've taken up more screen time, but it would have made the rivalry between MacRay and Frawley much more compelling.
I was hoping for more heist planning scenes but I understand that the point of this film isn't how to pull off a heist. It's more about MacRay and his desire to get away from it all. I suppose all the planning stuff in the book is best left on the page anyway.
Man oh man I wish they would have stuck with Jem packing the grenades for the last job. He still went out hard in the movie, but the grenades would have been hardcore. Of course, that may have turned out to be a bit over the top. But then again, I do enjoy explosions...
I called the change in the ending "interesting" above and I chose that word carefully lest it sound like I agreed with the change. I preferred the novel's more realistic and bleak ending, but I was okay with the film's much more positive finish. I have to give it up to them for deciding to go all the way and not only make the criminal the hero but also let him live and give him the hope of getting the girl.
Posted by Eric Harris at 8:52 PM