Machete started as a joke, in a way. It was 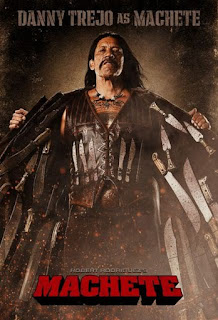 one of the fake movie previews from Quentin Tarintino and Robert Rodriguez’s Grindhouse double feature. Rodriguez claims he always thought of it as a feature, but the fact is that the preview was made before the feature film, which is definitely odd. Either way, I am very glad that they ended up making a full movie out of the idea.
The strange origins of this film aside, the cast may create a bit of head scratching as well. The star of the film is Danny Trejo, one of those actors you’ve seen a hundred times (he usually plays a tough guy), but you don’t know his name. Okay, so a character actor gets a starring role in an ironic B-movie. But he’s backed up by Robert De Niro, Steven Seagal, Jeff Fahey, Lindsay Lohan, Cheech Marin, Jessica Alba, Michelle Rodriguez, Tom Savini, and Don Johnson. That’s a weird cast, to say the least. But it’s also quite awesome.
The story, if you care, goes a little something like this: Machete is a federale who has been targeted by the evil Torrez (Seagal). He ends up in America, looking for jobs with fellow illegal immigrants. Machete ends up in the middle of a political and literal war over immigration. Don’t worry, it’s not nearly as serious as it sounds. In fact, if I had to classify this movie, I would call it “Mexsploitation.” That is absolutely a compliment, by the way.
Much like a blaxsploitation film, Machete is about a Mexican who is fighting the government while also getting with every lady who looks his way. It’s also made in an intentionally poor manner and meant to be funny. The important thing is that it accomplishes all of this. What makes it all possible is the use of Danny Trejo. It is great to see him as a star. I had a grin on my face just for the sheer fact that I was watching a movie starring Trejo. It makes sense for him to be a star, though. He’s not nice to look at, sure, but what a perfectly grizzled action star.
Trejo is not alone, though. Like I said, this cast is quite the anomaly. I’ll try to stick with the highlights. Steven Seagal is very enjoyable in the villain role. It was nice to see him in a theatre for a change. De Niro is obviously having fun here and he gets to ham it up as a redneck politician. Rodriguez (who I usually abhor) is actually okay in this one. Alba is just kind of there, but she does have a moment or two. Marin was fun in a short role. Jeff Fahey made for a great shady political advisor. Lohan wasn’t bad. And Don Johnson stuck out as a vigilante border patrol agent. In all honesty I had no idea Johnson was in this until the opening credits rolled (it was doubly amusing when he was credited as “Introducing Don Johnson”). My only complaint is that Tom Savini seemed completely wasted. He was set up as a rival to Machete, but it never came to pass. Here’s hoping that the DVD contains an awesome deleted showdown between the two.
The acting and casting is superb but this is still an action movie at heart and the action holds up. It’s a bit CG heavy at times (but that’s understandable since Rodriguez runs his own production company and CG is probably cheaper than practical effects at times). For the most part, this is a hilariously brutal film. It’s called “Machete,” after all, and there are machetes aplenty. So body parts get cut off and blood sprays everywhere and it’s all in good fun. If anything, though, the movie is not as bloody and action packed as one might assume.

The movie actually has a kind of statement, though it’s not to be taken seriously. Once again, this is a Mexsploitation film, which means that illegal immigrants are going to be portrayed in a heroic light. That may rub some people the wrong way (I’ve already come across some message board complaints about the film being too “left wing”). I can understand that, I guess, but this movie is so tongue in cheek that it shouldn’t bother anyone. I was just thankful that it didn’t stick with the Grindhouse look. The beginning is grainy and all, but it gets cleaned up after the opening.
Machete is a weird movie no matter how you look at it. But, more importantly, it is a very good time. I don’t care what your stance is on immigration, if you’re so bitter when it comes to that subject that an intentionally goofy movie like this bothers you, then you should stay away from film in general. If you have a sense of humor and you like a good ridiculous action movie, then you should check out Machete.

Random Thoughts (SPOILERS)
The music, done by Rodriguez and his band Chingon, is flat out awesome throughout.
Machete uses a man's intestines as a rope in this movie...that is fantastic.
The guards at Fahey's house are great. The funniest moments in the film involve them. When Trejo pretends to be the new gardener, packing a weedeater and a pickaxe, they just let him go on by, only to ponder, "You ever notice how you'll just let a Mexican onto your property if he's packing landscaping tools, no questions asked?" (That was paraphrased a bit, by the way.)
The promised sequel titles at the end made me laugh: Machete Kills and Machete Kills Again.
Steven Seagal committing seppuku with a machete is one of the best things I've seen on screen this year. Not to mention he claims that a machete sticking through his gut is "nothing." Awesome.
I loved how they incorporated nearly every bit of the original Machete trailer into the film.
Machete packs a ridiculously long machete near the end of the film. It is damn near comical and it's completely fitting with the rest of the film.
I really wanted to see Machete use the weedeater fitted out with blades instead of strings...come on, DVD...
Posted by Eric Harris at 11:40 PM