**The first thing you might notice is yet another "Vader" review (I believe it's number four after Scott Pilgrim, Inception, and My Son, My Son). This doesn't mean I'm lowering my standards it just means I really enjoyed these four films. And as I posted in my top fifteen list earlier in the year, the "Vader" doesn't represent the perfect film (even though I claim that in the description). I do intend on changing that description on the side someday. 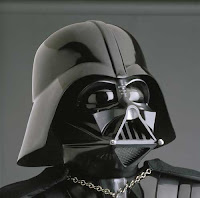 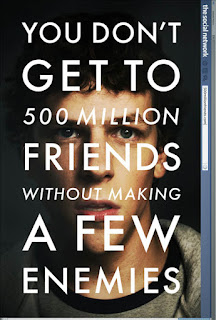 Movie,” seemed like a joke when I first heard about it. Okay, a popular website that seemingly everyone uses is getting its own movie. Sounds like a gimmick. Then I read that Aaron Sorkin was writing it and David Fincher was directing it. How quickly gimmick turns into entertaining art.
The creation of a social networking site may not sound like ripe material for a movie, but in this case, the “true” story actually contains plenty of dramatic possibilities. I put “true” in quotations because it’s not really known how much of this film is factual. A lot of the film takes place during legal depositions, and much of the script was based on documents from these meetings. But regardless of what is or is not true, the film packs in plenty of drama in the form of revenge and betrayal.
The story goes like this: Harvard undergrad Mark Zuckerberg gets dumped one night and goes back to his dorm to drink his sorrows away and denigrate his ex on the internet. He decides to take his anger out in the form of creating a site that allows people to rank female students side by side. This attracts the attention of the Winklevoss twins, who ask Mark to program a social network for Harvard students. Mark agrees, but creates Facebook on the side with his own crew, including his best friend, Eduardo Saverin. It becomes very popular and the legal action begins.
It’s all a bit more complicated than that, of course, but you get the idea. This isn’t really a movie about “what happened?” anyway. This is a film about Zuckerberg as a character. What is his motivation? Why does he betray his friends when there seems to be no real benefit? Zuckerberg seems to be operating on a different plane than the rest of the characters in the film. He certainly talks on a different level…or should I say levels? Zuckerberg talks a mile a minute and seems to be in the middle of three simultaneous conversations. It’s exhausting to listen to at times (a fact a character points out early on), but it’s always entertaining. Sorkin’s script contains some of the wittiest and smartest dialogue this year.
The dialogue is one thing, the delivery is another. Jesse Eisenberg (who hopefully will no longer be confused with Michael Cera after this) is the perfect choice for the speed talking, sarcastic Zuckerberg. I get the feeling that you’re supposed to hate the character at least a little, but I found myself rooting for him, because Eisenberg, while portraying a socially awkward, childish jerk, is still very charismatic and even likable in a strange way. I hope that Eisenberg is recognized this year come award season because as of right now, his is my favorite performance of the year.
The supporting cast is rounded out quite well. Andrew Garfield (recently cast as the new Spider-Man) stands out as Eduardo. I may have liked Zuckerberg a bit, but I felt complete sympathy for Eduardo and that is due to Garfield’s earnest performance. Armie Hammer as the Winklevoss twins (his likeness was digitally added to a body double in post production) was entertaining as well, especially since the twins provided quite a bit of comedic relief. And entertainment Renaissance man Justin Timberlake is amusing as Napster founder Sean Parker.
The acting and writing is great, but this is still a David Fincher film. Fincher has yet to make a film I don’t like (yes, I enjoy Alien 3) and his streak is alive with The Social Network. This film has all the visual flair one would expect from Fincher and there are segments that are just amazing (the regatta scene is definitely a standout). The dim lighting of the film worked for me as well. It created a cool atmosphere. The decision to go with Trent Reznor and Atticus Ross for the score was pitch-perfect too. It’s hard to imagine the film without the techno-infused music blasting throughout.
There is much to be said for the editing of the film as well. It all pieces together so coherently even though the story could potentially be very complicated. This is a film that delves into techno-babble concerning computer programming and whatnot and at times you just have to let it wash over you and stop trying to understand it all, which is how you should enjoy the entire film.
Don’t trouble yourself with questions about whether or not this film “defines a generation” like the commercials claim. For the record, I don’t see how we can think in terms of generation this or that in the internet age. Everything has become so diverse because of the internet you can’t even lump people together by their age anymore. I guess the story about the birth of a site that is helping to bring about the end of “generations” may in fact define the era. Maybe we should say that The Social Network is a film that “defies” generations.
The Social Network doesn’t need all the hyperbole that is surrounding it anyway. It’s a film that knows just how cool it is. Now you just need to check it out, not because it’s a statement on this or any generation, but because it’s smart, funny, and it is one of the best films of the year.
Posted by Eric Harris at 10:11 PM