"It's who you are. You can't run away from that forever!" No, you can't, but you can sure as hell stay as far away from this movie as humanly possible.
What’s the afterlife like? Well, I would rather find out firsthand 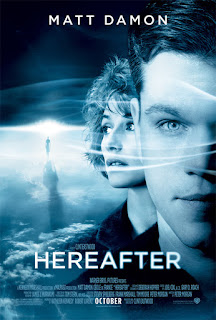 than sit through the pointless, boring Hereafter again. Yeah, I know, that’s quite the hyperbolic statement, but the latest film from producer/director Clint Eastwood was very disappointing. I went into the theatre expecting an interesting film about a former psychic who converses with the dead (Matt Damon) and his struggle with his “gift.” Instead I saw an overlong melodrama with a terribly plain payoff.
Hereafter is about the psychic mentioned above, but it’s also about a little English boy who wants to speak with his dead twin brother. The other third of the story concerns a French TV anchor that has a near death experience and becomes obsessed with the afterlife. The typical mystery of a film like this is the connecting factor. I can understand that the film doesn’t want to go with a standard “save the world” storyline, but the conclusion reached by screenwriter Peter Morgan just seemed pointless.
The other mystery a film about the afterlife deals with is if there is in fact an afterlife. Hereafter may have been much more interesting if the audience didn’t know if the afterlife existed in the film, but we’re shown that it does exist in the first minutes. I would find Matt Damon’s character far more interesting if it was posited that he may be a fraud paraded around by his brother (a very aged Jay Mohr). The confirmation of an afterlife has blinded many people’s reaction to the film. As usual, I used the IMDb message boards to see what was being said about the movie. I found a battle being waged between believers and atheists, with a lot of people liking or hating the movie based solely on their interpretation of an afterlife. My personal beliefs did not factor into my opinion of this film. I just accepted that a type of afterlife exists in Hereafter and that has no bearing on the existence of an afterlife in reality.
Your personal beliefs shouldn’t cloud your ability to notice terribly clichéd dialogue along the lines of “It’s not a gift, Billy, it’s a curse!” Pretty much every line spoken in this film feels like it’s been said one hundred times before and never in a compelling fashion. Not to mention the story is almost never interesting. I was never worried about any of the characters. I didn’t care about any of them at all because the writer spent too much time sowing their misery and forgot to create actual characters. The only description you can give of them is that they cry a lot and are connected by death. I know that the characters in a film about the afterlife don’t need to be lighthearted, but they can be more than shells of humans, at least.
Hereafter isn’t a dialogue rich character study, which would be nearly forgivable if the depiction of the afterlife was interesting at all. But as we see very early on, the afterlife is a vague, foggy nothingness peopled by shadowy, murmuring figures. Eastwood never truly shows us this place, either. We only get glimpses. If the filmmakers were not willing to go all the way with the premise, then they should have left it open to interpretation.
As if this bland movie wasn’t bad enough, it’s also way too long. Clocking in at over two hours, the story could have easily been told in ninety minutes. We are beat over the head time and time again with each character’s misery. The English boy can’t find any real help? The French woman is having trouble coping with near death? Matt Damon is lonely and hates his curse/gift? I could tell all of that after one scene, I didn’t need the subsequent five scenes for each character that etch these ideas in stone.
Despite all of these things, Eastwood is still a competent director. The problems with Hereafter are almost solely with the screenplay. It is all cut together coherently and I never thought that it stayed too long with any one character (actually, it just stayed too long with all of them). The sole action scene at the beginning of the film was interesting, even if some of the CG was questionable. Eastwood knows how to shoot a movie; it’s just not enough to save it.
Maybe you saw a preview for this film and you thought it was about the Matt Damon character and his ability to see into the afterlife. Well, don’t fall victim to the deceptive advertising because that is certainly not what this movie is, it’s only a terrible third of it. Being fooled by the preview isn’t the only thing wrong here, though. I didn’t hate Hereafter because I wanted it to be something it wasn’t. I hated this movie because it was pointless, contrived, and too long. Maybe I just wasn’t patient enough for this one, I don’t know, but I can’t recommend this to anyone. I suggest avoiding this one at all costs.
Random Thoughts (SPOILERS)

So what was the resolution for the little boy, really? He gets some advice from his brother (and did anyone else think that Damon's character was faking that cheesy advice at the end, just like all the impostors before him?), but he is still miserable and he has not accepted the death. His end purpose was to be a mini-stalker for Damon. He ended up being completely inconsequential to the entire plot. And how weird was it that the scene in which his brother saved him by blowing off the hat turned out to be extremely good luck through sibling rivalry? Just when it looked like there was something about the afterlife that mattered in the real world, the screenwriter decided to say, "Nope, just coincidence is all." Weak.
What was with all that Charles Dickens crap? Was it just an excuse to eventually have a Derek Jacobi cameo? It didn't make sense to me and I didn't need three (three!) scenes in which Matt Damon listens to someone read Charles Dickens. Is it not a sign of a weak film when we simply watch a man listen to another work of fiction?
Clint Eastwood needs to stop adding terrible music to his films. The score was thankfully nonexistent for most of the film, but when the French lady showed up this terribly cheesy "French" music would play and it seemed painfully out of place and it was completely distracting.
The cooking class scenes seemed to last forever. Did we really need nearly five minutes of blindfolded taste testing?

Let's recap: Hereafter contains multiple scenes of Matt Damon listening to audiobooks and celebrity readers and tastetesting food whilst wearing a blindfold. Yeah, if you saw this movie, be like me and try your best to unwatch it.
Posted by Eric Harris at 9:01 PM