The Kurgan is cool with the elderly kicking some ass, hell, he's hundreds of years old himself.

I read the graphic novel of RED (Retired, Extremely 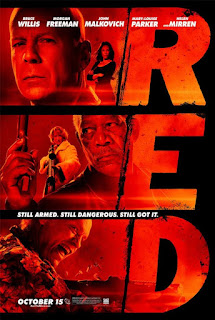 Dangerous) as soon as I heard that it was to become a movie starring Bruce Willis. Willis seemed perfect for the grim story of Frank (Paul in the comic) Moses, a tough retired CIA operative forced back into action. I was excited because the graphic novel is filled with brutal action peppered with references to CIA black ops. Well, the film RED is a bit different, but that’s not necessarily a bad thing…well, I guess it is if you’re married to the source material (which I wasn’t).
This film is not grim and the violence is PG-13. Sometimes the censoring of an action film to get the teens in bothers me, but RED is fun enough that I forgive it. Instead of the dark solo mission of the comic, RED is more of an elderly operative reunion movie, and I mean that in the best possible way.
The story goes like this: Frank Moses is attempting to live a quiet, retired life. But he’s bored. His only enjoyment comes from talking to the customer service lady (Mary-Louise Parker) who deals with his pension checks (Frank keeps ripping them up so he has a valid excuse to call). Suddenly a death squad is sent after him in suburbia, so he kidnaps the customer service lady/love interest and heads off to find out why someone tried to kill him.
Willis is joined by former friends and foes such as Morgan Freeman, Brian Cox, Helen Mirren, and John Malkovich. Richard Dreyfuss and Karl Urban are also tossed in for good measure. Needless to say, the cast is quite impressive. I could write a few paragraphs talking about all of their moments, but I’ll just stick with my favorites. Malkovich was my favorite part of the movie, period. Some of his wacky dialogue was a bit over the top, sure, but the crazed faces he makes throughout had me laughing consistently. Cox was fun as well as a former Russian agent. I also enjoyed Freeman’s appearance in the film, but he doesn’t factor into the movie nearly as much as the previews and the poster might lead you to believe. In fact, Cox (who I didn’t even know was in this until he showed up) has a larger role than Freeman.
The previews do deliver on one thing, though: ridiculous action. Don’t take that the wrong way; I was completely okay with the crazy action scenes in this movie: literally shooting a house to pieces, sniper-worthy precision with a grenade launcher, a hand gun versus an RPG, etc. I dug all of that wackiness. I was okay with it all because the tone of the film allowed it. This is not meant to be some realistic, gritty action movie. It’s meant to be fun, and it is.
RED isn’t a complete blast, though. It does suffer from an overlong running time, or at least long for this type of film. It’s cheesy at times, mainly during scenes involving Mary-Louise Parker. Nothing against Parker’s performance; it’s really just a character thing. I was hoping for more CIA humor as well. There are plenty of casual comments about killing people, but I wanted references to actual (or at least rumored) covert CIA operations. In other words, I was hoping for a slightly smarter film. And the score was kind of annoying at times. In a movie like this the score is something that should not be noticed, but multiple times this stupid happy-go-lucky music would be playing during an already goofy scene. It was just overkill.
There is another factor that works for this movie, though: Bruce Willis. I’ve barely mentioned the star of the entire film. He isn’t breaking any new ground in this film, sure, but the guy is a star for a reason. I’m always up for seeing Willis kill roomfuls of random enemies; he’s just fun to watch. Sure, it would’ve been great to see him face off with a specific villain (the “bad guy” role is vague at best in this film), but Willis does have a few excellent moments opposite Karl Urban. Their office fight was great and that scene in which he steps out of a spinning car, while completely stupid and disrespectful to the laws of physics, was still pretty awesome.
RED might not be the dark, brutal action movie some people were hoping for; in fact, I can imagine some people absolutely hating it. If you’re expecting a faithful adaptation, you’ll most likely despise it. (Just check out the film’s message board on IMDb.com for evidence.) If you’re expecting realism, you might even walk out. But RED is just good old-fashioned (emphasis on “old”) fun. It’s crazy, ridiculous, and funny. Lighten up and I’m sure you’ll enjoy it.

Random Thoughts (SPOILERS)
So, kind of a bummer that Morgan Freeman gets killed off, twice. It was just kind of strange since they were all so happy and goofy at the end. I had to laugh when Parker says something along the lines of, "It all worked out." Yeah, except for Morgan Freeman, you heartless slag!
Seriously, you can't just step out of a spinning car like that.
Julian McMahon is not old enough to play a character that was a lieutenant in the Army back in 1981. Assuming he was 20 (and I'm not sure if that's a possible age to reach that rank), that would make him 49. McMahon himself is only 42 and they didn't age him for this movie. It was just kind of weird.
Cool to see Ernest Borgnine still rocking on the big screen.
It seems way too easy to break into the super secret records room in Langley. Just kick in the drywall right next to the door and there you have it. Yeah, I know, definitely not the dumbest part of this movie, but still.
And finally, this weird coincidence: Brian Cox starred in a movie called Red with Tom Sizemore in 2008.
Posted by Eric Harris at 11:20 PM